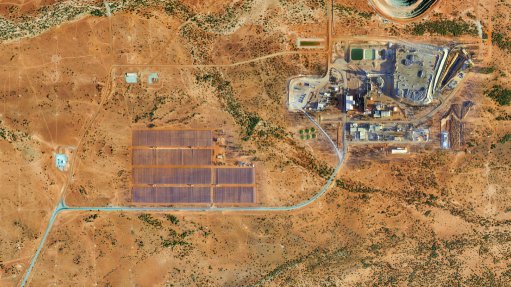 Australia’s largest off-grid solar and battery storage facility has been successfully commissioned and has started supplying electricity to the DeGrussa copper and gold mine, in Western Australia.

Juwi Renewable Energies in South Africa is tracking the performance of the Australian installation, as it believes that there is significant potential to apply the hybrid solution in Africa.

“Solar/diesel hybrid systems are currently considered state-of-the-art for microgrids and off-grid applications, delivering the lowest overall cost of power, while guaranteeing power availability around the clock and, at the same time, reducing the fuel bill by around 25%. That’s a massive saving and a competitive advantage,” says Juwi South Africa MD Greg Austin.

The innovative $40-million project, designed and implemented by Juwi Australia, is the largest integrated off-grid solar array in Australia, and has established DeGrussa as an industry leader in the use of renewable power for mining and processing operations.

Austin suggests that the solar/diesel hybrid solution is a first step towards a 100% solar solution with battery backup.

“This pioneering project on the other side of the globe will bring learning, technical development and project experience to off-grid mining and industrial customers in mineral-rich Africa,” Austin says, noting that with 120 MW of solar photovoltaic (PV) under its African belt, Juwi looks to supply energy at a reduced cost.

The Juwi group developed the 10.6 MW solar hybrid system to fully integrate with the existing 19 MW diesel-fired power station at midtier Australian mining company Sandfire Resources’ DeGrussa mine. Single-axis tracking and a 6 MW battery maximise the use of solar power to provide most of the daytime electricity, while reducing the mine’s total diesel consumption by about 25%.

The diesel-fired power station owned and operated by Pacific Energy subsidiary KPS continues to provide baseload power to the DeGrussa mine with sufficient minimum load to ensure it can respond quickly to meet the power requirements of the process plant and underground mine.

The system at the DeGrussa mine has achieved full generation capacity after successfully attaining key milestones during commissioning. The facility is currently generating about 7 MW of power, which is in line with expectations, given the time of year.

Commissioning of the project started in mid-March, following installation of the last of the 34 080 PV panels. The solar array covers a total area of over 20 ha at the site, which is located immediately adjacent to the DeGrussa underground mine and processing plant. The DeGrussa mine is located 900 km north of Perth, Australia, and 150 km from the nearest town, Meekatharra.

The plant’s full generating capacity confirms that the plant can perform in accordance with contractual specifications and validates the power purchase agreements covering the facility. Testing and commissioning activities are continuing to fully integrate the project with the existing diesel-fired power station and to ensure it maintains stable operations at 100% generation capacity.

Juwi Australia MD Andrew Drager says the successful completion of the DeGrussa solar project is a significant milestone for the renewable-energy and mining industry.

“We have managed to overcome the many commercial and technical barriers . . . to make this flagship project a success. We hope these learnings will make it easier for other mining companies to follow a similar path, as well as provide the motivation to do so,” he says.