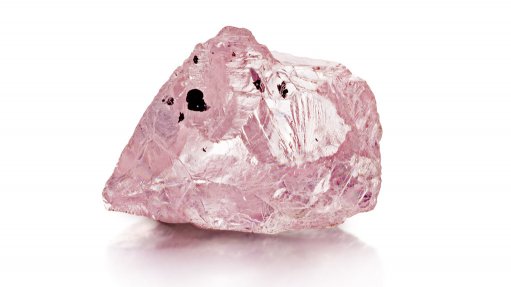 VANCOUVER (miningweekly.com) – A review of 61 diamond finds over the past five years, which were significant enough to warrant press releases by the companies that mined them, shows that announcing the diamond finds publicly keeps market interest high, said diamond investment specialist Paragon International Wealth Management in a press release.

The Toronto-based fund manager advised that advancing technology has also contributed to ‘special’ diamonds being recovered more frequently, and the news flow has helped keep the market buoyed.

Sometimes, the perceived value of the diamond comprises a large proportion of the market capitalisation of the company that mined it. The 1 111 ct ‘Lesedi La Rona’, recovered by Botswana-focused Lucara Diamond Corp in 2015, for example, was estimated at $75-million, or 15% of the company's total value. Similarly, Lucapa Diamond Company, with a market cap of $100-million at the time, uncovered a 404 ct stone in 2016 worth more than $15-million.

Rio Tinto announced the 187 ct diamond recovered from its Diavik mine, in Canada, as the largest ever found in North America. Similarly, a 28 ct fancy pink diamond uncovered by Alrosa was the largest of its kind found in Russia.

“The bigger the diamonds, especially if they are coloured, the better for headlines and investor interest,” Paragon added. “Technology has also played a role. Lucara, for example, recently equipped the processing plant of its Karowe mine with leading technology to enable large diamonds to be identified and recovered whole.

“Gem Diamonds, however, has been less successful with technology at its Letšeng mine, in Lesotho, another source of large diamonds. Gem recently told analysts that its average price per carat included a breakage rate of 80% due to technology limitations,” Paragon said.

Paragon noted that public announcements of significant diamond finds are a helpful barometer for the market. However, while publicly traded mining companies must announce developments that might impact their stock price, they are not necessarily the last word. Some mine operators, like Rio Tinto, do it rarely and others, like De Beers, do not announce them at all.