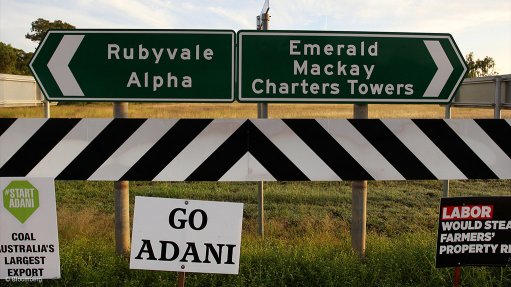 PERTH (miningweekly.com) – Indian major Adani’s groundwater management plan for its Carmichael coal project, in Queensland, has been approved by the Department of Environment and Science (DES).

The approved plan was the eleventh iteration of the groundwater management plan, and was previously independently assessed by the Commonwealth Scientific and Industrial Research Organisation (CSIRO) and Geosciences Australia, which confirmed that the project met strict scientific requirements.

The DES on Thursday said that the assessment process for the groundwater management plan had been “rigorous” and “based on the best available science”.

“In assessing the plan, both Adani and DES took on board advice from CSIRO and Geoscience Australia – the same advice considered by the commonwealth government in approving an earlier version of the groundwater management plan in April this year,” the DES said.

“DES sought further clarification and advice from CSIRO and Geoscience Australia, which it received on June 7. Based on this advice, DES is satisfied that the groundwater management plan sufficiently establishes the main source aquifer of the springs as the Clematis Sandstone.”

The DES has, meanwhile, required Adani to undertake further scientific work over the next two years, to identify any potential contribution for other acquifers, and to strengthen the groundwater management plan.

Adani Mining CEO Lucas Dow on Thursday said that the approval of the groundwater and black-throated finch management plans paved the way for construction on the Carmichael project to start.

“Moving forward, our priority is ensuring the safety of everyone who works on the project and that all construction activity meets the strict environmental requirements we have agreed to meet in our management plans and approvals.

“Over the coming days preparatory activities such as finalising contracts, mobilising equipment, recruitment and completing inductions will continue. These preparatory actions will enable us to then start construction activities including fencing, bridge and road upgrades, water management and civil earthworks on the mine site. The level of construction activity will then steadily increase over the coming weeks,” Dow said.

“The Adani Carmichael mine is one of six in the Galilee basin that could create tens of thousands of jobs in construction and operation and deliver billions of dollars in royalties over their working life span.”

Macfarlane welcomed the decision by the Queensland Premier to ensure that the Coordinator-General plays an overarching role for the approvals process for resources projects, noting that the projects in Queensland were subjected to rigorous approval processes to ensure they proceed in a way that benefits the state and delivers world-leading environmental outcomes.

“The Adani project has undergone eight years of planning and assessment at both the State and Commonwealth level. Everyone should accept this ruling and let the project proceed. Queenslanders have sent a very clear message that the stalling tactics of activists must stop.