By: Terence Creamer     2nd September 2011 Power-intensive companies in South Africa are beginning to openly express concern about the current tariff trajectory, which they claim could undermine existing investments and forestall yet others; Power prices aside, there have been some developments on the beneficiation policy front this week;... →

By: Terence Creamer     26th August 2011 Potential renewable energy developers are currently sifting though bidding documentation released by the Department of Energy earlier this month; Billions at stake as a High Court judge applies his mind to the complex Sishen iron-ore rights matter and Umgeni Water has started to consider... →

By: Martin Creamer     19th August 2011 We see India’s hunger for South African coal growing somewhat; greener building techniques and we look at the issue of gold and a US presidential decision taken by America many years ago, we see that there is still some kind of impact and I find it quite interesting the story involving Nixon.  →

By: Martin Creamer     12th August 2011 South Africa’s biggest gold miner is keen to take a journey to the centre of the earth to liberate 100-million ounces of deep gold; government is going all out to give new impetus to its R860-billion public investment programme and we look at South Africa in terms of aeronautical research. →

By: Martin Creamer     29th July 2011 South Africa is preparing to launch its own unmanned air vehicle (UAV) early next year; South Africa’s biggest iron-ore miner is expects to spend up to R30-billion on its biggest expansion ever; and Surging gold is side-lining platinum and may hit an all-time record of $1 800/oz by Christmas. →

22nd July 2011 A waste dump in Limpopo that is being turned into a perspective treasure trove; Brazil and South Africa teaming up to develop a surface-to-air missile and Rockwell Diamonds is going all out to boost its South African ownership. →

15th July 2011 A stunning new South African vision statement can be expected on the 11th day of the 11th month of 2011 – at 11 o’ clock; South African steel is being used in the UK’s tallest sculpture to mark next year’s London Olympics and Southern Africa must stop ‘squandering’ its coal and begin... →

By: Martin Creamer     8th July 2011 South Africa, which hosts 80% of the world’s manganese, is planning to expand its exports; South Africans are building a massive new gold mine in the DRC and a diamond mine in Sierra Leone and Foreign investment in Botswana is on the rise to help the country emerge as a new regional energy hub. →

By: Martin Creamer     1st July 2011 Six African Chambers of Mines will complete an empirical study on mine nationalisation this month; South Africa’s mine taxing beats Botswana’s mine ownership, a study as found; and South Africa is talking to Swaziland about building a new railway line to boost coal exports. →

By: Martin Creamer     23rd June 2011 The final countdown has begun for the launch of the next phase of South Africa’s pioneering Gautrain; South Africa’s economic growth rate is falling way behind that of Sub-Saharan Africa and America is funding a new Southern African rail initiative aimed at promoting intra-African trade. →

By: Martin Creamer     10th June 2011 Major American companies are turning their backs on African gold because of new US legislation; A tough new UK bribery laws and that will impact on South Africa and South Africa is going to be outlining its ambitions for broader continental integration at a summit this weekend. →

By: Martin Creamer     3rd June 2011 R38-million is being spent a month on the world’s largest shaft-sinking contract in Rustenburg; South Africa’s iconic diamond company De Beers has opened its first store in China and Top South African companies are braving the frozen Arctic north in search of diamonds and precious metals. →

By: Martin Creamer     27th May 2011 Police plan to microdot household items in two million South African homes in the next year; International interest is being shown in a new South African rail-fault technology and Namibia plans to convert their destructive encroacher bush into electricity. →

By: Martin Creamer     20th May 2011 The global air transport community is livid about South Africa’s plans to lift air charges by 129%; Chinese investors are homing in on South Africa’s precious metals mines and Johannesburg’s own billion-rand broadband project could lower the costs of doing business in the Golden City. →

By: Martin Creamer     13th May 2011 The South African gold-mining industry is being shaken by the claims of silicosis sufferers; a Rustenburg platinum company is going a head with a R13-billion expansion programme and a new push is under way to make engineering attractive to South African youth. →

By: Martin Creamer     5th May 2011 Africa’s newest telecommunications satellite is safely in orbit; South Africa’s first space satellite doing following all the criticism and the broadband bonanza that South Africa is experiencing at the moment. →

By: Martin Creamer     29th April 2011 Houses are being built with material recovered from polluted Mpumalanga mine water; Pick n Pay is ‘picking’ the sun rather than Eskom for its future electricity supply and Johannesburg is one of 20 global cities where revolutionary new school tuition may be introduced. →

By: Martin Creamer     22nd April 2011 An avalanche of global interest has come down on South Africa’s nifty new electronic mining register; South Africa’s Harmony Gold intends building a R20-bn mine in Papua New Guinea and Minerals Minister Susan Shabangu is set to be rooting out law-breaking miners, and reoffering their resources to... →

By: Martin Creamer     14th April 2011 South Africa’s soaring iron-ore business has been given another world-beating boost; The Western Cape is looking to the oil and gas industry to enrich its new Industrial Development Zone and Russia has set up a new fund to stimulate mineral exploration in South Africa.  →

By: Martin Creamer     8th April 2011 South Africa is the real-life lab for new German mining equipment; South Africa receiving a measly $400/t for product that it could sell for $100 000/t and Tuesday marks the 50th anniversary of a human being entering space for the very first time. →

1st April 2011 One of the world’s richest coal discoveries has been made in neighbouring Mozambique; A South African gold miner is beating all the odds in the war-torn Ivory Coast and A South African mine bought for R1 a year ago is now worth hundreds of millions of rands, thanks to rocketing antimony prices. →

By: Martin Creamer     24th March 2011 Russians have ploughed R1,5-billion into a new black-controlled manganese mine in the Northern Cape; Foreign investors have provided R4-billion in funding for Bakgatla community’s platinum mine in the North West and Transnet plans to spend R110-billion on much-needed rail, port and pipeline... →

By: Martin Creamer     18th March 2011 Investors are planning to plough R4-billion into a new coal mine in the impoverished Limpopo; London investors have approved a multi-billion rand capital expenditure on Southern African diamond projects, one a brand new mine and explorers are turning their attention to Africa as the price of... →

By: Martin Creamer     11th March 2011 South Africa-linked companies investing heavily in shale gas; the intake of engineering students is on the rise and claims of a “brand new” South African platinum find are still unconfirmed. →

By: Martin Creamer     4th March 2011 The black-owned mining company Merafe wants the government to put an end to the export from South Africa of raw chrome ore; South Africans are planning to build a new copper mine in the Democratic Republic of Congo (DRC). Are they trying to compete with Brazil and The government is walking the... →

By: Martin Creamer     25th February 2011 Mining titan Anglo American is planning to invest R34-billion in South Africa in the next few years; South Africa’s Gold Fields is building five new gold mines on four continents and More mining will have to take place in the next 20 years than has taken place in the last 10 000 years, to meet... →

By: Martin Creamer     18th February 2011 South Africa is set to pull jobs out of its R846-billion infrastructure spend; The building of a Trans-Kalahari railway line to Walvis Bay is gaining fresh impetus and South Africa has massive manganese mining potential that only the government can unlock. →

By: Martin Creamer     10th February 2011 China is expected to increase its gold reserves beyond the Fort Knox level – a big boost for South Africa; Platinum is a great South African treasure – but the world warns that we could lose it all because of mismanagement; South Africa’s new real-time mining title system is a huge step forward. →

21st January 2011 From cars to cables, the microdot is the hot new crime fighter; a new move is afoot to have South Africa’s taxis manufactured locally and There are now only six months to go before the Gautrain projects takes its final lap. →

By: Martin Creamer     14th January 2011 Wits University has achieved a great breakthrough – it is able to turn garbage into electricity and also petrol and diesel, at a profit; Patrice Motsepe must have been watching and listening, because his company is taking steps to generate its own electricity at metal smelters in Machadodorp and... →

By: Martin Creamer     10th December 2010 A new Constitutional Court ruling gives special new status to South Africa’s near-mine communities; Despite the strident calls for beneficiation, South Africa’s raw-material exports soared to new heights in the first half of this year; and no less that 380 entities are keen to plough money into... →

By: Martin Creamer     2nd December 2010 Wits University this week opened a world-first laboratory that is targeting the mine design of the future; Ventersdorp has been in the news for different things, but it seems that the small farming town is banking on a sparkling new diamond future; and there is a shortage of bitumen that is... →

By: Martin Creamer     19th November 2010 Experts want coal to be declared a strategic mineral in order to put an end to its wasteful use; The government is promising to treat the upcoming State mining company in exactly the same way as it treats private-sector companies and South Africa's biggest gold miner says that it is on the cusp... →

By: Creamer Media Reporter      12th November 2010 Foreign investors are shrugging off calls for mine nationalisation and voraciously snapping up investment opportunities; Yet another private-sector company is preparing to generate its own electricity; Because there is no long-term power path certainty, gold projects are falling by the wayside -... → 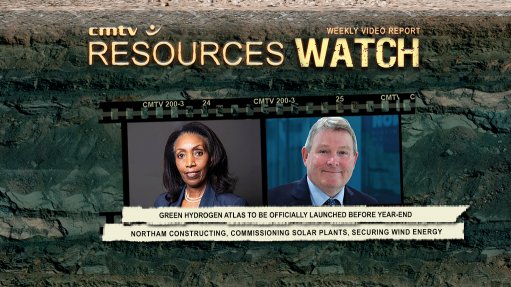 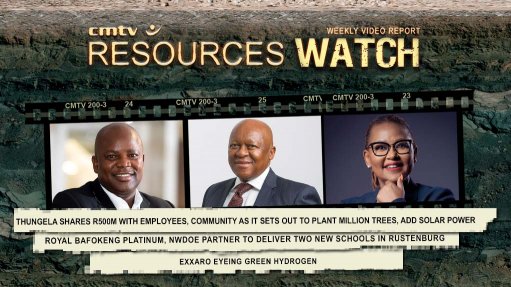 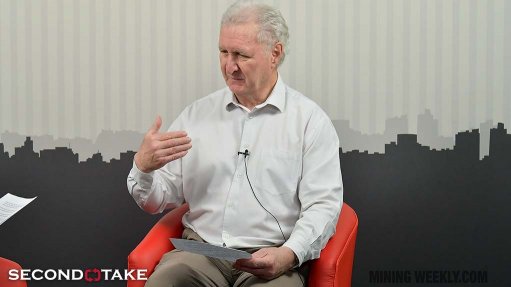 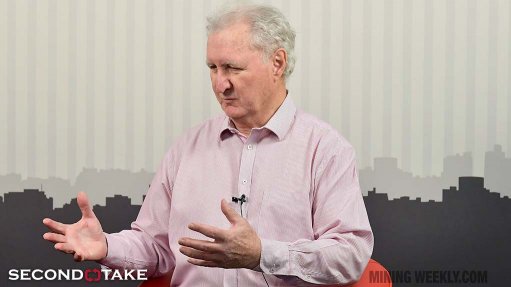