7th November 2001 Plans to list Pakistan’s only copper-mine project on the Alternative Investment Market (AIM) this year are on hold until fighting ends in neighbouring Afghanistan, Mincor Resources said. →

7th November 2001 The BHP Billiton today announced a record attributable profit of $608-million for the quarter ended September 30, an increase of $19-million or 3,2% compared to the combined figure in the corresponding period last year. →

6th November 2001 Unusually low freight rates across much of the world are playing an ever more important role in the international coal trade. →

6th November 2001 Mining company BHP Billiton said it hoped a 25-day wage strike at its Samancor unit would soon be resolved after a key union said it may end the strike today. →

5th November 2001 The diamond industry edged closer to agreeing ways to curb illegal exports of so-called ‘blood diamonds’ from war-torn Africa but reservations by the US still hung over a possible deal. →

Innovative fuel-drop for Aussie mine

5th November 2001 International petroleum firm Shell Engineering has designed and constructed a 750m vertical fuel drop into the Mount Isa mine, one of the world’s largest underground hard- rock mines. →

5th November 2001 South African suppliers of engineering equipment, services and skills are set to reap significant benefits from the R278-million acquisition of engineering-solutions company Bateman Project Holdings (Batepro) by an international consortium of private investors, to be concluded by February →

5th November 2001 South Africa’s Western Areas said it will keep its 50% stake in the huge South Deep gold project and proposes to make a cash payout to shareholders. →

Innovative fuel drop for Aussie mine

2nd November 2001 International petroleum firm Shell Engineering has designed and constructed a 750m vertical fuel drop into the Mount Isa mine, one of the world’s largest underground hard- rock mines. →

2nd November 2001 While the dust may have settled above-ground since a shake-up in the local coal industry led to the genesis of Eyesizwe, South Africa’s fourth-largest coal company, underground the company is working up a storm as, within the next decade, it prepares to grow its production from 18,5-million... →

2nd November 2001 Zambia’s Konkola Copper Mines said it would increase copper production in 2002 by 20% from a projected figure of 240 000 tons this year despite a downturn in global prices. →

Normandy deal could save Anglo $25m/y

2nd November 2001 South Africa’s AngloGold said it saw no reason to raise its bid for Australia’s Normandy Mining but would be willing to do so if new value was uncovered. →

Another zinc operation to close

1st November 2001 Canadian miner Hudson Bay Mining and Smelting said it will close its Ruttan zinc-and-copper mine in northern Manitoba next year because of low metal prices, a slowing global economy and a poor economic outlook. →

By: Terence Creamer     1st November 2001 Although steel and mining group Iscor has confirmed a formal approach for its mining business, it is unlikely that any moves will be made until after the conclusion of unbundling process on November 26. →

1st November 2001 Canadian miner First Quantum is moving rapidly towards a decision to expand its treatment facilities at Zambia’s Bwana Mkubwa mine to 30 000 tons of copper cathode a year. →

1st November 2001 Delegates at a three-day conference on ‘blood diamonds’ in Angola will seek a plan to block the trade in conflict gems that has thrived despite United Nations (UN) sanctions, the Angolan government said. →

By: Terence Creamer     31st October 2001 Trade and Industry Minister Alec Erwin has strongly defended as trade-rule compliant a recently-announced deal through which South Africa’s largest steel company, Iscor, has secured an undivided 6,25-million tons a year of iron-ore from its associate Kumba Resources. →

31st October 2001 The Algerian mining industry issued a tender for the exploration and development of a gold deposit in the area of Tiririne Hanane. →

30th October 2001 A five-year hydrocarbon management contract with the Jean Gobele project in Guinea has been awarded to the Shell NEWC (North, East, West and Central) African Mining Team. →

Gold-panning championship to be held in SA

30th October 2001 South Africa has won its bid to host the 2005 World Gold-panning Championships – and will be the first country in Africa to do so. →

30th October 2001 Copper treatment and refining charges are likely to fall in the near term as the concentrate market enters a temporary deficit, said Tony Warwick-Ching, principal consultant: copper at CRU International. →

30th October 2001 Mining giant Anglo American is set to spend R1,2-billion by year-end on the procurement of services from small and medium enterprises (SMEs) in the empowerment area, an improvement on the recorded R1,046- billion it spent in 2000, reports Nick van Rensburg, manager of Anglo's enterprise... →

30th October 2001 Diversified miner BHP Billiton on Monday appealed against a court order which would allow workers at its South African aluminium and manganese units to join strikers at its ferrochrome plants. →

By: Terence Creamer     29th October 2001 Fledgling mining house, Kumba Resources, is planning to pursue a range of black economic empowerment (BEE) initiatives in an effort to consolidate its position as the largest South African-domiciled diversified mining company when it is listed on the JSE Securities Exchange at the end of next month. →

29th October 2001 Demand for platinum jewellery in India, the world’s largest consumer of gold, is likely to vault to some six tons in the next five years compared with a few kilograms currently, Platinum Guild International (PGI) said. →

29th October 2001 The development of a continuous-mining system by President Steyn Gold and Brandrill has now reached the stage where steps are being taken to facilitate commercial implementation. →

26th October 2001 After suffering a setback earlier this year with the closure of Via D'oro, the Free State jewellery cluster is again launching a concerted effort to become a jewellery-manufacturing force. →

Important notice to users of the Apple App versions of Mining Weekly, Engineering News and Polity 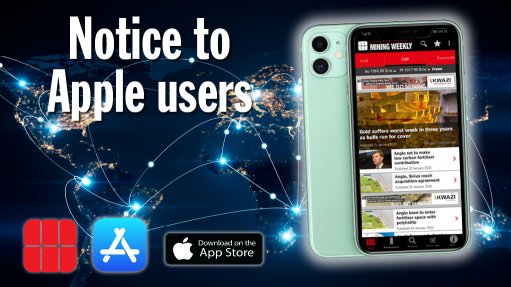 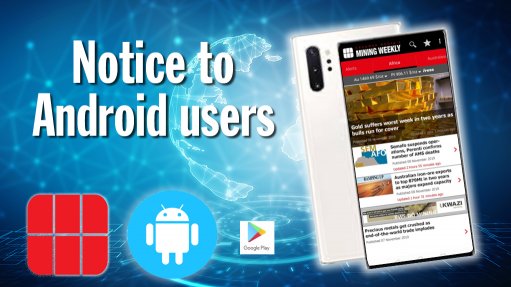