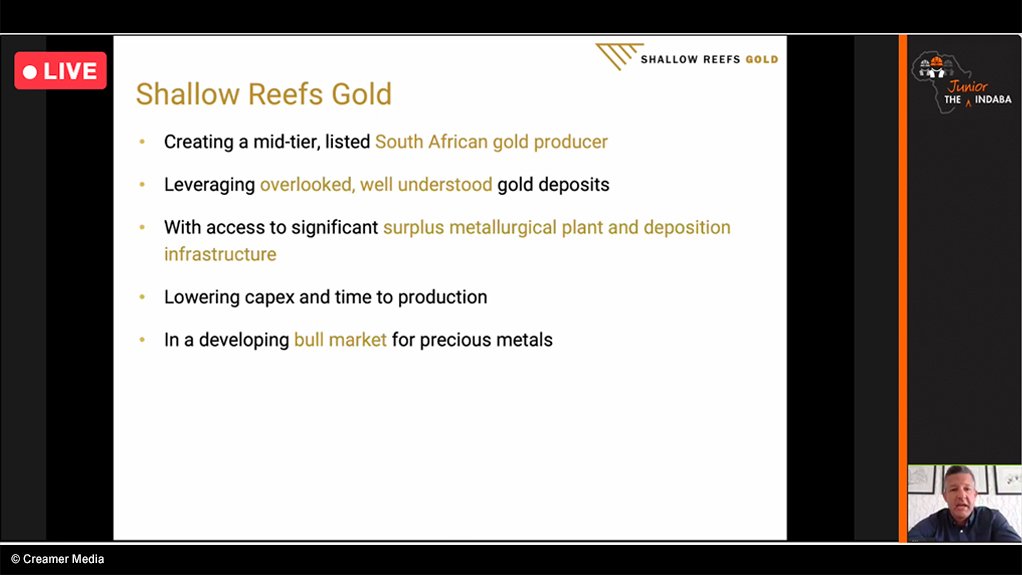 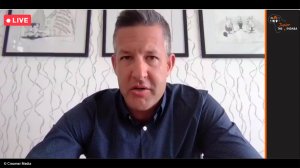 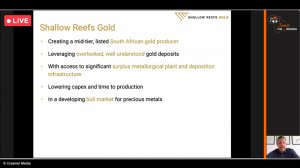 JOHANNESBURG (miningweekly.com) – New midtier gold aspirant Shallow Reefs Gold is in the process of being built in South Africa to mine the shallow reefs of South Africa’s historic Witwatersrand Gold Basin.

Shallow Reefs Gold is targeting 200 000 oz/y gold production from virgin reef over the next decade from a pipeline of “well-known, high-quality shallow gold deposits” in the Witwatersrand Gold Basin and there is a firm belief that South Africa’s significant endowment has the capacity to create growth, jobs and community upliftment at a time of desperate need as a country.

Being looked at are five deposits. Right now, Shallow Reefs Gold has a portfolio of others, all above 1 200 m, involving a 21-million ounce-plus resource at 4.7 g/t, most of it National Instrument (NI 43-101) or Samrec compliant, with one of the assets having a nigh two-million ounce proven and probable reserve at 4.3 g/t.

“We fully anticipate that we’re going to see a continued acceleration of the gold price, both in US dollars and in emerging market currencies. We’re seeing an incredibly strong emerging bull market in precious metals and we’re seeing huge pressure on the rand,” said Shallow Reefs Gold’s Mark Gilbert, the CEO of Nupen Staude de Vries and former MD of Macquarie Bank in both South Africa and Europe. He was addressing day two of 2020 Junior Indaba Online, covered by Mining Weekly.

“This is not purely a South African-based trend. This is happening across the continent. All emerging markets are struggling with currency pressures right now,” he said, adding that real tangible assets such as gold, platinum, copper and mining assets – “anything that is not denominated in its fundamental form in currency” – were likely to outperform materially over the medium to long term.

“In our opinion, this represents a huge opportunity for South Africa, potentially the largest economic windfall of our lifetimes for mining companies. We’ve missed the 2008 commodities boom, largely due to the political environment. In our opinion, we cannot miss it again. We’re going back into another boom market, particularly for precious metals, but again for all real assets. As a commodity-rich economy and continent with significant need for economic growth, this is a windfall that we cannot afford to miss," Gilbert said.

“In South Africa, we’ve got some of the best underground mining people on the world. We’ve got the skills and the resources. The critical third leg is capital. I’ve personally spent a huge amount of time outside of the country trying to raise capital. It’s not easy, but we believe the winds are shifting simply by virtue of economics.

“The risk and reward equation is moving in South Africa and Africa’s favour, in our opinion, and again we’re starting to see that in the share price performance of our listed miners. All parties need to come to the table – government, unions, mines. If we do, I believe capital markets will reward South Africa because the economics will just simply make sense and at the end of the day, economics trumps.

“On gold, we need a new strategy for tackling the Wits. We have to view the Wits through a different lens. In South Africa, if you find a five-million-ounce gold deposit with a grade of 4 g/t in situ, it is considered uneconomic. In the rest of the world, if you find the same deposit, you’ve got a listed mining company,” Gilbert pointed out.

“A lot of it is regulatory, the environment and the narrative, but geology and economics don’t change. So, those deposits are as mineable in South Africa as they are anywhere else in the world.

“South African gold mining has developed down two paths. We see ultradeep-level mining at Mponeng and South Deep and others. They are technological marvels and profitable at these gold price levels but with massive sunk capital behind them and hence absolutely committed to their strategy, and it is the right strategy for that mining capital. The marginal capital deployment to continue those mines to extend their lives makes sense.

“In the second route, we’ve seen surface mining at Mine Waste Solutions and DRDGold both doing unbelievably well in the retreatment of dumps – but there’s an enormous chunk of ground in between those two and it's a vast, overlooked set of shallow, virgin gold deposits.

“A lot of these deposits are well known, drilled and explored and have shafts in them. So, we continue to look for new deposits and we overlook the ones that we have already and for me that’s the big opportunity. These deposits are incredibly well understood, geologically and metallurgically. They’re extensively drilled and modelled and another huge advantage is that they are close to under-utilised existing infrastructure.

“There’s pretty much dormant and tailings depositions, fully licensed across the Witwatersrand Gold Basin. It’s available for tolling and purchase and that goes a huge way to lowering capital costs compared with having to go to Zambia and Botswana and have to build roads and power.

“The strategy of Shallow Reefs Gold, our company, is to acquire and develop the target portfolio of one-million-ounce-plus mineable gold deposits. We want to operate above 1 200 m below surface, we’re looking purely at virgin orebodies that have deposits greater than 4 g/t run-of-mine. At today’s money, that’s R4 000/t revenue, even if you assume operating costs of much deeper level mines. We’re looking for access via trackless decline infrastructure where possible, close to existing plant and tailings infrastructure,” Gilbert said.

There has not been any junior producer listed in South Africa for some time, although Shallow Reefs Gold is aspiring to mid-tier status: “The challenges are incredibly well known, so we’re not naïve to those facts,” Gilbert said.

A number of the gold assets that Shallow Reefs Gold is trying to acquire right now from the majors were drilled extensively, they had shafts sunk in them, but they were never brought to account because when this was done in the late 80s and 90s, the majors just never publicly revealed these assets as it was not a requirement.

“So, we’re acquiring the assets and securing them,” added Gilbert, who said that the next phase would be to raise a small amount of money to put those through a NI 43-101, Jorc compliance process, and carry out quality assurance and quality control (QAQC) of the existing data in order to list. The most likely exchange on which Shallow Reefs Gold would list, he said, was on the London Stock Exchange or the Toronto Stock Exchange in mid-2021.

“That’s the strategy right now,” said Gilbert, who added that private funding had been lined up to bring the assets up to listable status without having to do any drilling other than QAQC drilling to confirm the standard.

The success story being emulated by Shallow Reefs Gold is that of Modder East gold mine, a 1.2-million-ounce, 3.9 g/t in situ Black Reef deposit 350 m below surface, which was turned to profitable account by current Sibanye-Stillwater CEO Neal Froneman, despite the gold grades being well below those of the Witwatersrand’s celebrated deep-level mines.

“The very simple equation is that the shallowness makes all the difference,” Gilbert said.

In preceding presentations, reference had been made to the difficulty exploration companies had in attracting investments to fund exploration.

“I’m not sure that’s absolutely correct. I think we’re in a liquidity and cash glut globally. The key question that has to be asked is why is that money not coming into mining assets in, specifically, Africa,” said Gilbert.

“Globally, debts have been increasing faster than revenue. The debt load globally has become completely unsustainable. We used to talk about trillion dollar deficits on an annual basis, but the Unites States ran an $836-billion deficit in June alone.

“So, the rate of debt is increasing exponentially. The year 2008, when I was the managing director of Macquarie Bank South Africa, was a critical decision point. Governments fundamentally had three choices in front of them. They could follow a programme of fiscal and monetary consolidation, raising taxes and cutting spending but that is an unpalatable decision for politicians as it tends to get them unelected quickly.

“They could have defaulted on their debt obligations. Again, governments are addicted to debt and we’re seeing those challenges now coming home to roost in South Africa, or they could attempt to inflate away the debt burden by printing money.

“I was managing director of Macquarie Bank Europe at former US Federal Reserve chairperson Ben Bernanke’s at Jackson Hall in September 2009. He announced quantitative easing on the Friday and I resigned on the Monday to go and buy a gold mine,” said Gilbert.

“So, since 2008, we’ve seen global Central Bank balance sheets increase from just over $3-trillion to close on $22-trillion as of July this year – a seven-fold increase, and that is literally money printing out of fresh air, and we’re seeing over 17% compound annual change in the money supply,” Gilbert said.

“And it’s happened many times before. The Covid crisis has shown us that we have chosen not to abandon the  expansion of credit but quite the opposite was true. When I started in 2008, the gold price was just on R200 000/kg and we’ve seen nearly a 500% return compounding at close on 14% a year. That has been very definitely reflected in the gold prices of South African gold producers, specifically between 2019 and 2020,” Gilbert said.

Asked by Swanepoel to comment, Mergence Corporate Solutions director Peter Major commented that not only South Africa’s past mining skills but also its past financial skills were able to deal with even falling gold prices, compound its efficiencies and return a good rate.

“We did that for 100 years and we did it with a flat gold price from 1880 to 1920. We didn’t need a falling rand and a rising gold price and we made our gold mines good investments, and this country took advantage of the gold price going from $20/oz to $35/oz back in 1932, because the environment was conducive.

“There’s even bigger problems bringing in foreign money for a gold mine in South Africa. We know the assets and the miners are here but we don't have a policy and a police force and army that can protect the person who puts his money in the country, especially in a gold mine.

“Gold mines are open season for the Department of Mineral Resources and Energy (DMRE) and definitely for the communities and the Zama Zamas (informal miners). I wish Shallow Reefs Gold luck. I think it could be done if everybody plays ball – the government, the police and the DMRE,” said Major.