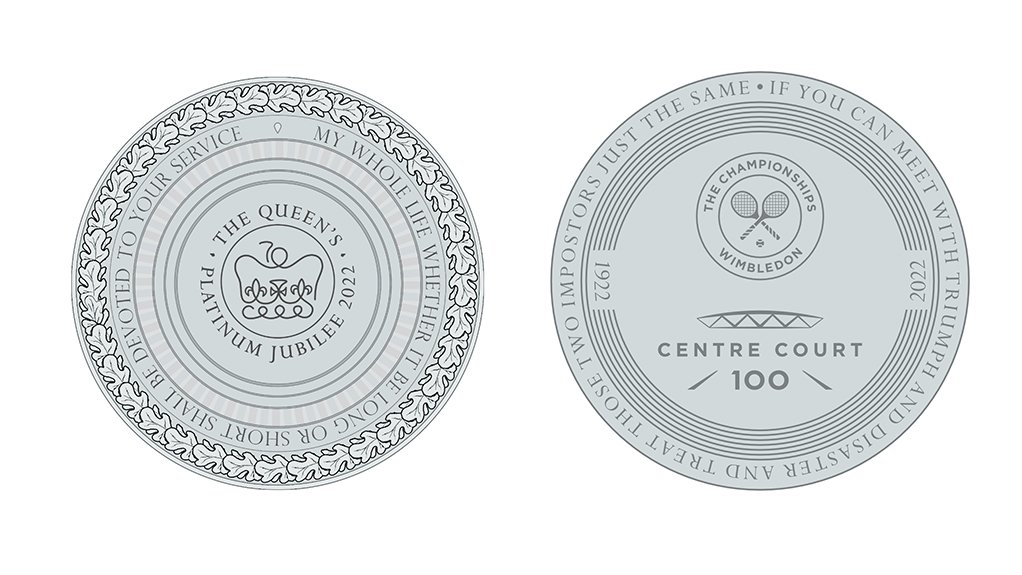 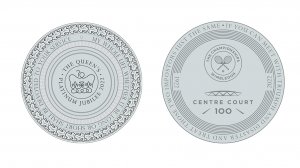 JOHANNESBURG (miningweekly.com) – In the year of the Queen of England’s platinum jubilee, the coins to be used in the Wimbledon ladies’ and gentlemen’s singles finals coin toss will be made of platinum for the first time in the championships’ history.

This follows the unveiling by the UK Royal Mint in March of its largest ever platinum coin to coincide with the year of Queen Elizabeth’s platinum jubilee.

The Wimbledon toss coins have been specially designed by bespoke jeweller Heirloom London in collaboration with the All England Club to commemorate both the Queen’s platinum jubilee and the centenary of Wimbledon’s Centre Court at the All England Club’s Church Road Grounds.

“This wonderful symbolic gesture will add a special element to proceedings this year at the championships, in a year of double celebration,” All England Club chairperson Ian Hewitt stated.

Made from 95% fine platinum, the coins have dimensions of approximately 43 mm x 3 mm, with each gram of their 70 g pure platinum representing a year of service from Her Majesty.

They are being presented to the championships by the World Platinum Investment Council (WPIC), the members of which are South Africa’s Anglo American Platinum, Impala Platinum, Northam Platinum, Royal Bafokeng Platinum, Sedibelo Platinum and Tharisa.

The obverse, ‘heads’, side of each coin carries the official emblem of the Queen’s platinum jubilee and has been inspired by the themes of service, endurance and strength. The design incorporates a quotation from Queen Elizabeth’s speech made on her 21st birthday on 21 April 1947 – ‘my whole life whether it be long or short shall be devoted to your service’ – as well as an oak leaf motif inspired by the royal badge of the House of Windsor.

The reverse, ‘tails’, side of each coin is inscribed with the famous Wimbledon Roundel, as well as its centenary mark, specially designed for use in centre court’s centenary year. The centre court allusion continues with the use of the inspirational Rudyard Kipling quote, ‘If you can meet with triumph and disaster and treat those two impostors just the same’; words that are famously inscribed above the players’ entrance to centre court.

WPIC, as a global market authority on platinum investment, expressed delight at being able to showcase platinum in this way.

“It is, of course, the pre-eminent precious metal chosen to symbolise a 70th anniversary, a fitting tribute for the most important and memorable of occasions.

“Beyond that, platinum serves our planet by improving air quality and paving the way for hydrogen, particularly green hydrogen, the next generation, zero-emissions fuel – and its associated uses,”  WPIC CEO Paul Wilson stated in a release to Mining Weekly.

Platinum is the metal that is unlocking the global hydrogen economy, with hydrogen poised to become a mainstream, sustainable fuel which will play a central role in decarbonisation; over 30 countries already have road maps or strategy documents setting out their intentions in this regard.

Owing to its catalytic properties, platinum is fundamental to the technology that enables the hydrogen economy; it is used in the production of green hydrogen from wind or solar power and in fuel cells for zero-emission fuel cell electric vehicles.

Thirty times rarer than gold, around 76% of the world’s reserves of platinum are located in South Africa.

Platinum’s high melting point, high density, ultra-stability and extreme non-corrosiveness make it crucial to many industrial and manufacturing processes, yet it is used to fabricate the finest jewellery in the world.

Platinum is also an investment asset that reflects its value across the demand spectrum from industrial to precious metal. It is included in investment portfolios via physical bars and coins, on-line bullion accounts, physically-backed exchanged traded funds and through futures contracts.

One of platinum’s most important uses is as a catalyst – the presence of even a small molecule can speed up chemical reactions, reducing process energy needs and improving yields.

Platinum, which enabled the first-ever autocatalysts in the 1970s, remains a key component in vehicle emissions control.

Queen Elizabeth’s platinum jubilee coin has a face value of £1 000, diametre of 150 mm and features a flagship Britannia design.

“This is our first 2 kg coin in platinum and this piece is designed specifically for the investment market,” said Royal Mint precious metals director Andrew Dickey at the unveiling.

The coin’s release comes amid a strong start to the year for the Royal Mint, which experienced a 182% rise in demand for its platinum products in the first five weeks of this year, compared with the same period in 2021.

Investment in bullion bars and coins continues to be a sector of demand growth for platinum, driven by the North American market in particular, which grew by 9% in 2021 to a decade high of 264 000 oz, achieving a market share of 80%.