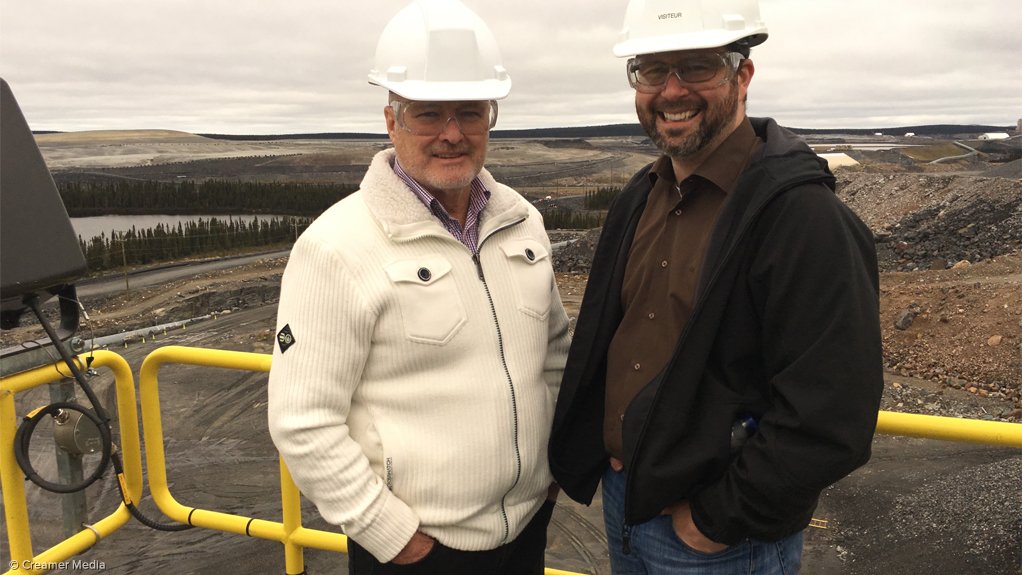 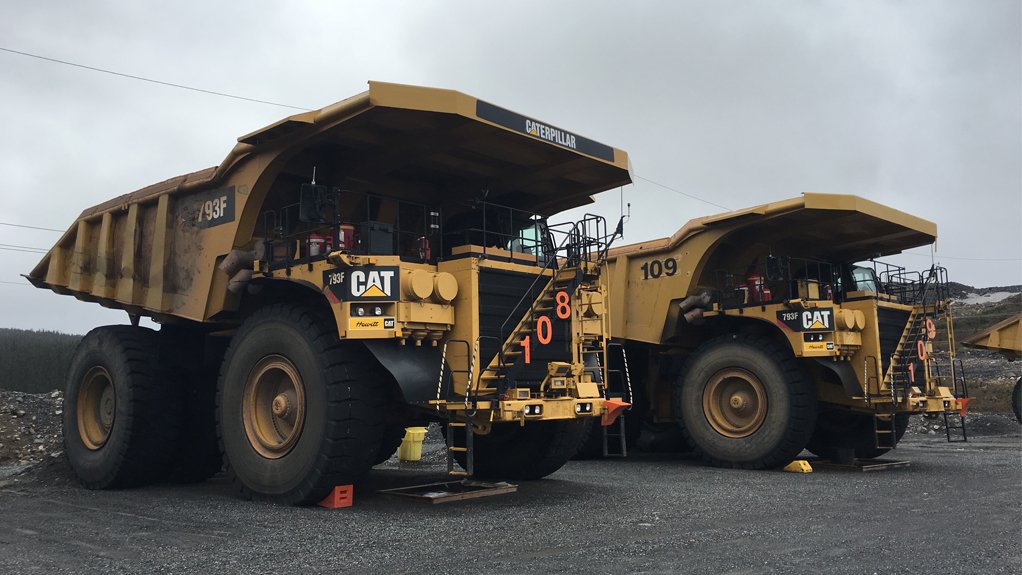 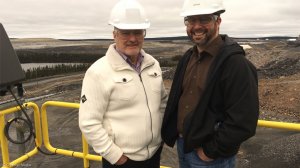 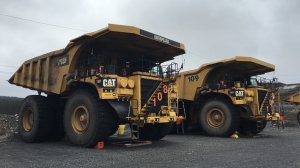 MONTREAL (miningweekly.com) – Despite the price outlook for the steelmaking ingredient iron-ore crawling sideways at best in 2016, TSX- and ASX-listed junior Champion Iron is preparing to restart its recently acquired Bloom Lake mine, near Fermont, Quebec, as soon as markets improve.

Under the leadership of chairperson and CEO Michael O’Keeffe, Champion subsidiary Quebec Iron Ore had on April 11 closed the C$10.5-million acquisition of Cliffs Natural Resources’ Bloom Lake assets and the Quinto claims, located opposite its flagship Fire Lake iron-ore project in the famous high-grade Labrador Trough mining district, straddling the provincial borders of Newfoundland and Quebec.

In contrast, Cliffs had in 2011 bought the mine for about C$4.9-billion from Consolidated Thompson.

On a sponsored tour of the more than 45 km2 Bloom Lake property this week, Mining Weekly Online observed significant infrastructure in place that would make for a rapid restart when a market recovery had gathered pace.

Bloom Lake had been placed on care and maintenance since December 2014, when the mine could not compete with collapsed ore prices, which fell from a record high of $180/t to $50/t three years ago. Cliffs had placed Bloom Lake and several other associated subsidiaries under Companies’ Creditors Arrangement Act (CCAA) protection in January 2015, in an effort to try isolate losses and protect shareholders.

However, iron-ore had this week lost nearly all of its year-to-date gains, as ore with 62% content fell to $48.18 per dry metric ton, after posting the biggest monthly loss in about five years in May. This had left prices that topped $70 in April, at less than $5 above 2015’s year-end level.

Market analyst Wood Mackenzie had also recently forecast iron-ore prices would be about $49/t on average during the second half of the year. Pricing for the bulk commodity was expected to remain volatile for several years until iron-ore and steel mill overcapacity had been worked off.

On Thursday, the world’s largest steel producer ArcelorMittal told news agency Reuters that it was suspending a significant expansion of its Mont-Wright iron-ore mine, located next to Champion's Bloom Lake asset, owing to poor market conditions.

MEASURED APPROACH
Champion had already identified the potential to improve mine capacity at Bloom Lake, O’Keeffe stated, noting that previous operations had historically produced a maximum of six-million tonnes a year of iron-ore fines, at 66% iron. At this grade, Bloom Lake’s product fetched a premium to the standard 62% iron index price.

“Champion would look to increase this to over seven-million tonnes a year, at a similar grade, chiefly through the implementation of a new mine plan, as well as improved recoveries,” he advised.

O’Keeffe took up the position of Champion’s chairperson after the merger with Mamba Minerals in 2014, and he added the title of CEO of the company later that year.

Before championing the potential of Canada’s Labrador Trough, O'Keeffe – a former Glencore executive – led the development of Riversdale Mining with its large-scale Benga and Zambeze mines, in Mozambique, from a junior with a market capitalisation of A$7-million until it was acquired by Rio Tinto for A$4.1-billion. During the period at Riversdale, O'Keeffe raised about A$780-million for Riversdale.

The CEO said that Champion had approached Cliffs in connection with a potential acquisition of the Bloom Lake mine and Quinto claims at least two years ago, even before activist investor Casablanca had launched and won its proxy contest with Cliffs, whose new management was more in favour of focusing on the company’s core US iron-ore pellets business.

Champion had closely monitored the development of the Bloom Lake mine and, since December 2014, the company had completed financial and technical due diligence and prepared a financial model that reflected the pricing assumptions, production improvements and cost reductions required to achieve profitable operation, O’Keeffe explained.

“We believe there is capacity to reduce the care and upgrade costs at the Bloom Lake mine, which would reduce the overall required capital. Discussions with leading commodities traders have also confirmed offtake interest with the backing of steel mills, to the extent that the company has confidence that future Bloom Lake production could be pre-sold,” he advised.

With about $20-million cash in the bank, the TSX- and ASX-listed company could sustain care-and-maintenance activities at the mine for about 20 months, at a cash burn rate of about $1.2-million a month, according to O’Keeffe.

On top of the mining equipment Champion acquired for the first phase of revised operations, several pieces of heavy equipment still under CCAA management were seen standing on the property. These included about 12 heavy haulage trucks with capacities of about 240 t each, two electric shovels and a drill rig, which would become the property of Champion if they were not moved after two years.

REFINED STRATEGY
Champion’s plan entailed keeping the mine in good order with a current staff complement of 42. During previous operations under Cliffs, the mine employed about 500 workers.

Champion VP for engineering David Cataford explained that the company had developed a plan that would enable production to resume at Bloom Lake by improving output and significantly reducing operating costs.

Improvements in the mine plan would mainly focus on lowering operating costs, while upgrades in the processing plant will deliver an increase in recoveries through changing the recovery circuit that had previously made use of outdated spiral technologies. While the new mine plan would aim to lift output, it was expected to slightly reduce the life of the mine, although it would also reduce the strip ratio and produce higher iron head grades.

Cataford stated that Champion expected to achieve significant reductions in mining costs, crushing, processing and tailings costs and site support logistics and shipping costs, with the potential to bring operational free-on-board costs per ton down substantially from the previous levels.

According to Cataford, Cliffs had spent about $600-million on a second-phase development that was never completed, including the purchase of a 3.8 km conveyor belt from the crusher, located next to the openpit, for the plant that would become the backbone of the improved operation. All equipment required to complete the second phase was already on site, some of it not even unpacked.

“We are only focusing on fixing the first-phase plant for now. While the second phase is about 70% complete, we will prove that we can run a relatively small, sustainably profitable operation,” O’Keeffe commented.

The Bloom Lake mine also had access to fully commissioned and operational land-based transport infrastructure that included a rail load-out facility and 36 km of railway connecting with the Quebec North Shore and Labrador Railway, which would enable delivery of the ore at a competitive future cost to the Port of Sept-Îles, the company advised.

The quality of the 580-million tons of pit reserves at Bloom Lake was typically also free from impurities and the deposit’s flexibility for having purer hematite ore to the west, and more magnetite-rich ores to the east of the deposit, would improve the company’s ability to service expected strong demand for these ores by steelmakers around the world.

Champion had also acquired 29 homes and two motels that could house up to 700 fly-in workers in the nearby town of Fermont.

Meanwhile, Champion also continued to advance the Consolidated Fire Lake North project, located to the south of Bloom Lake, which hosted more than 3.4-billion tonnes of iron. A 2013 prefeasibility study, which focused on the so-called East-Pit and West-Pit deposits, estimated that the C$1.4-billion Fire Lake mine could produce 9.3-million tonnes a year of concentrate over 19.6 years.