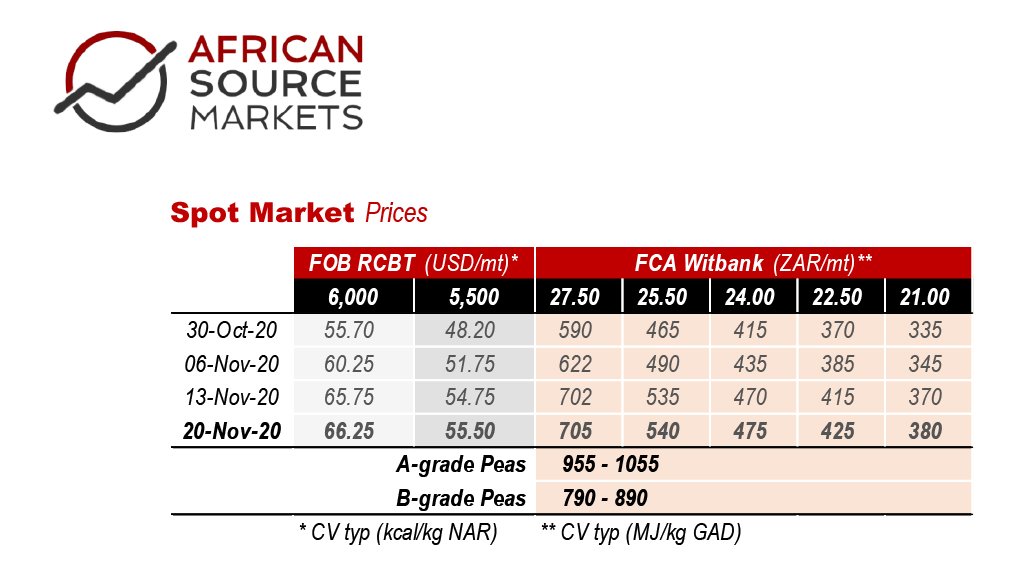 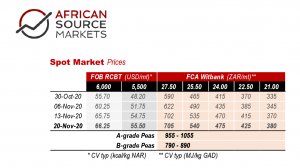 Coal markets had a volatile week, as Chinese import restrictions may be lifted, whilst severe weather is affecting Newcastle port loadings. RB1 prices rallied slightly although the ZAR continues to strengthen, despite further sovereign credit downgrades by Moody’s.

Chinese officials are considering starting to restrict the further development of coal-fired power plants from the 14th five-year plan for 2021-2025. With half of China’s coal capacity less than 10 years old, and around 100 large plants already under construction, there is no need for more if the country wants to avoid stranded assets under Xi Jinping’s carbon neutrality plans by 2060.

Meanwhile, Japan is enjoying lower coal demand amidst increasing nuclear plant availability, although a cold winter could see a higher than expected coal burn. The latest insurance and investor group calling for an end to coal is the United Nations-convened “Net-Zero Asset Owner Alliance”, representing over $5-trn in assets under management. Their research shows that by 2030, around half of global thermal coal capacity will be loss-making.

In South Africa, as Eskom mulls the closure of several of its RTS stations, the lastest G20 report on Climate Transparency indicates that SA needs to reduce emissions to below 348 Mt CO2e by 2030 and to below 224 Mt CO2e by 2050 to be within a 1.5°C Paris-aligned “fair-share” pathway.

Short term trend momentum (MACD) is running nicely towards its previous peaks around the 4-5 level now. It should reach this within the next 2 to 3 weeks, at which point the market could be considered “overbought”.

However, price action is lacking in vitality and we are nowhere near the previous price peaks of last year. Perhaps we will not peak this year and a less volatile market will emerge in 2021, with more of a sideways drift in price, as momentum slowly erodes back down again?

Either way we should continue to see sustained price pressure to the upside for now, although short term corrections are possible to slow the upwards move.

Early next year may prove to be a fortuitous time for miners to lock into forward price sales, considering that the forward curve is flat to slight contango for 2-3 years
out.