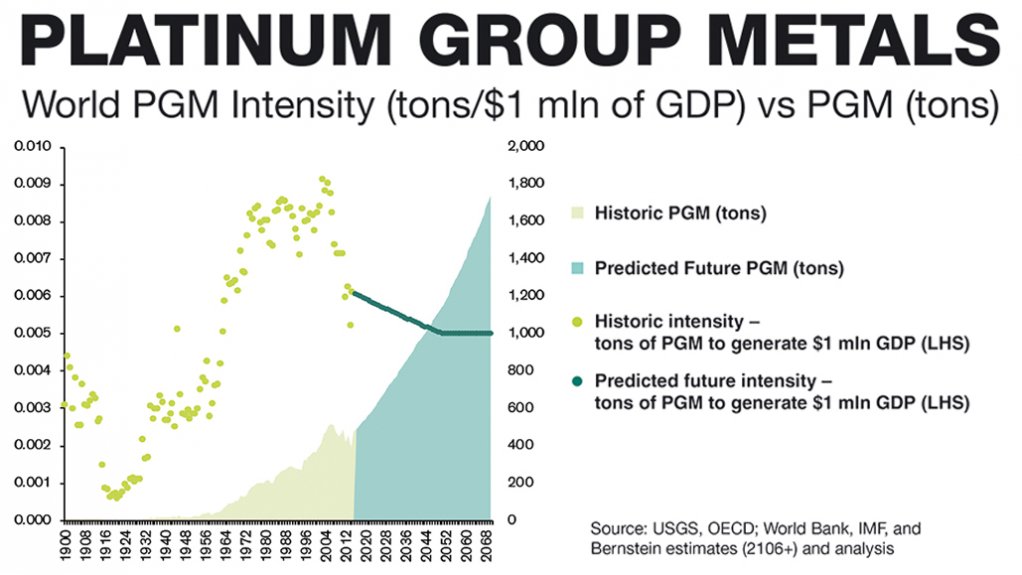 JOHANNESBURG (miningweekly.com) – If you want a fuel cell, you need platinum, is one of the multiplicity of points Bernstein investment company makes in a major work just released, which shows growing and ongoing demand for platinum group metals (PGMs) and provides ample reason why metals and mining matter more than ever.

In the 413-page work, which provides core lessons and a 50-year bullish forecast, analysts Bob Brackett and Danielle Chigumira, with contribution from Vijay Bhasin, find that with every 1% growth in gross domestic product, mined volumes should increase by 2%.

“Mining is extremely important, and the industry has replaced prospectors with satellites, miners with automation and massive scale, and robber barons with well-run companies that have sound and profitable businesses to invest in.

Described as being exposed to exciting themes, mining is declared profitable and well behaved, with enough cyclicality and catalysts to create interesting entry points, with environmental, socioeconomic and governance (ESG) offering the chance for ‘global ESG’ — to participate in the energy transition— and the chance for ‘local ESG’ – to participate in influencing companies (in a sector with a legacy of mistakes and missteps) to take the opportunity for real and lasting improvement.

One hundred years of metal consumption and price data for 78 commodities is analysed and a 50-year bullish forecast provided. In the process, it has been learned that:

In terms of addressable markets for commodities, petroleum and coal (thermal + steam) markets sit at the top with $1 000-billion annual revenue. Steel, iron-ore, gold, aluminium, copper, and cement belong to the $100-billion club.

Fortunately, the sector is blessed with broad and detailed disclosure of economic studies to investors, with far more detail than one finds, for example, in the oil and gas sector or chemicals sector, the study notes.

First, from an accounting standpoint, the most valuable asset a mining company has are its reserves and resources, and yet they are not directly incorporated onto the balance sheet and, thus, additional disclosure is important for investors.

Second, a mine is a complex combination of geology, engineering and economics and, thus, requires more disclosure than, say, opening a franchise.

Third, the historical legacy of mining includes a taint of distrust.

The study finds earnings before interest, taxes, depreciation and amortisation (Ebitda) to be the most critical metric for investors to consider.

The mining sector, it states, earns a 14% return on capital investment (ROCE) in the long run, with Ebitda margins of close to 40% and Ebit margins close to 30%.

Copper and iron-ores have the best long-run Ebitda margins with aluminium the worst. Iron-ore and metallurgical coal have historically earned the best ROCEs, with zinc, copper, nickel and aluminium underearning.

Buoyant demand is predicted for platinum group metals (PGMs), with growth persisting going forward. World PGMs per capita is also shown as keeping pace with GDP well into the future.

Platinum, Sibanye-Stillwater CEO Neal Froneman told Bloomberg last week, has only just started to re-rate and it will continue, with no reason why it should not eventually trade at $2 000/oz and probably even higher.

“I think people will wake up to the fact that platinum is mispriced, and I think when that happens, it’s going to be a scramble, and we obviously want to be there and to say that we are producing all the PGMs in a way that is as green as possible,” Pallinghurst managing partner and co-founder Arne Frandsen commented to Mining Weekly in a Zoom interview this month.

The hydrogen infrastructure being developed in many countries is initially for trucks, which are seen as the perfect lever for an eventual stable hydrogen ecosystem.

Platinum-catalysed hydrogen fuel cell trucks, using green hydrogen, generate absolutely zero emissions and this clean technology is seen as the way to transform cities and roads environmentally. Beyond mobility, hydrogen is also being increasingly seen as a potential replacement for metallurgical coal in the production of steel and something that will, in one form or another, play a role in every nook and cranny of global industrial, commercial and residential human activity.

The forceful coming to the fore of fuel cells has emphasised the reality of fuel cells not being possible without the use of platinum, and proton exchange membrane water electrolysis also being impossible without PGMs. Hence the extremely positive PGM demand projection being reiterated by this comprehensive and timely Bernstein document.

In the electrolysis process water is split into oxygen and hydrogen. The hydrogen produced is stored in containers specially designed for handling gases and delivered to filling stations, where it is offered for sale to the public through a dispenser.

The gas is converted on board the vehicle into electricity for propulsion by means of a platinum-catalysed fuel cell. The vehicle emits only water as steam and the cycle closes.

Battery electric vehicles such as municipal buses and trucks are being converted into hydrogen fuel cell vehicles by China, which aims to supply one-million hydrogen vehicles by 2030.

“China already has a very well-established infrastructure to charge batteries and run battery electric trucks. But in the north, it’s very cold and we know battery electric vehicles don’t work well in the cold at all. The north also has a lot of solar and wind energy and if they use that solar and wind, it makes the fuel cell trucks and cars very appealing,” World Platinum Investment Council director of research Trevor Raymond revealed in a Zoom interview with Mining Weekly.