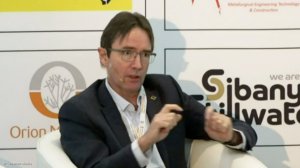 JOHANNESBURG (miningweekly.com) – A deep understanding of the critical drivers of high-risk greenfields exploration by junior resource companies is needed in South Africa, where exploration of a low-risk brownfields kind by major mining companies dominates.

“You can’t hope to attract venture capital funded juniors to invest in your country if you don’t understand how their business model works,” Minerals Council South Africa CEO Roger Baxter said during his keynote address on day one of the 2022 Junior Indaba covered by Mining Weekly. (Also watch attached Creamer Media video.)

At that stage, the investors do not yet have a deposit to explore, even though they have raised millions of dollars, and "want to go out there and shoot the lights out".

If any extra conditions are imposed on them at that early stage, it will make it extremely difficult for them to do their exploration and to find a viable deposit.

Thereafter, as more time is spent proving up the deposit or doing the initial exploration in finding a deposit and then proving up of that deposit, the risk and the costs begin to lower progressively.

“I think we, as a country, haven’t yet got to the stage of fully understanding what really drives junior greenfields venture capital exploration from a country-level perspective.

“The reason I make that point is that 90% of all the exploration that happens in South Africa is by the majors. Only 10% is by venture capital funded juniors.

Baxter stated that the Minerals Council would achieve more for the country’s minerals sector by proactively assisting, offering help and constructive input to the Department of Mineral Resources and Energy (DMRE) to resolve constraints than engaging in public criticism and battles.

He noted that little would be achieved through an antagonistic relationship with the regulator and the Minerals Council, representing 78 member companies and associations generating 90% of South Africa’s annual mineral production, preferred to play a constructive, partnership role in addressing the industry’s concerns to find sustainable solutions.

The approach did not mean there were not robust engagements with the DMRE or that litigation was not an option.

The acknowledgment in the DMRE’s exploration implementation plan that its cadastral system was dysfunctional, that it was taking too long to process prospecting and mining right applications, and that stricter use-it or lose-it measures must be applied over these rights to prevent sterilising of mineral deposits were significant concessions by the department. The acknowledgment that there must be a tax incentive, like Canada’s flow-through shares, to stimulate exploration investment is positive, he said.

These concessions would be a major first step in addressing and fixing the constraints that had contributed to South Africa staying stubbornly below 1% of global exploration expenditure for a decade and well off the 5% high of 2003, he said.

“We are not sitting here just criticising the government. We are saying, you have a problem, it’s your problem and it’s our problem. We will play a role in trying to sort it out,” he said, noting the Minerals Council and its members were deploying experts to assist the government. It has offered to fund the purchase of a transparent, off-the-shelf cadastral system.

“Is it perfect? No, it’s not, but it’s far better than having an antagonistic bunfight over these issues,” Baxter said, adding that the Minerals Council had deep reservations over the DMRE’s recently gazetted exploration strategy, which the Minerals Council had no role in drafting, and it had concerns about the exploration implementation plan, which was a document it negotiated with the department and the Council for Geoscience.

“The Exploration Strategy is out of synch with the Exploration Implementation Plan, and it does not find resonance with the Minerals Council’s views,” said Baxter. “The plan is a step in the right direction, but we now need to take it to the point where we reduce time frames and apply smart tape instead of red tape.”

Among concerns about the exploration implementation plan were the high level of ministerial discretion, no recognition that exploration tenures must be more than 15 years to attract venture capital-funded investments, and the introduction of meritocracy to be used as the basis to determine the granting of prospecting rights instead of the first-come, first-served system.