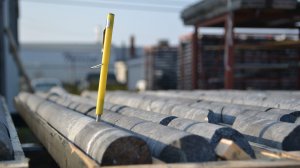 Toronto-headquartered explorer and developer Vanadium One has enlisted the support of commodities major Glencore for the development of the Mont Sorcier iron and vanadium project, in Quebec.

Glencore will assist in arranging funding to deliver a bankable feasibility study (BFS) and has entered into an eight-year offtake agreement for the eventual vanadium-rich iron concentrate that the mine will produce.

At least $10-million will be required to complete the BFS, of which Glencore will facilitate the arrangement of $8-million, with funding to be secured before year-end.

“We believe this partnership offers shareholders not only a way to expedite the development, but also the best opportunity to maximise the value of future production, utilising Glencore’s worldwide reach, thus unlocking the robust potential we see at Mont Sorcier as outlined in our preliminary economic assessment (PEA),” said president and CEO Cliff Hale-Sanders.

The 2020 PEA outlined a C$457-million project, based on a traditional openpit mining scenario with magnetic separation processing to produce about five-million tonnes a year of vanadium-rich iron concentrates, with low levels of impurities.

The PEA calculated an after-tax internal rate of return of 33.8% and a net present value, at an 8% discount rate, of C$1.7-billion.

Hale-Sanders added that Vanadium One’s preference remained to find a strong technical and financial partner to help maximise the value chain as Mont Sorcier is brought to production.

“That said, we have the very capable technical nucleus to commence our journey.”