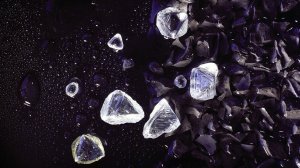 VACUUM SECURITY There is scope for using vacuum conveyor technology in specialised applications, such as diamond conveyance, for greater efficiency and security

It is often more beneficial to use vacuum technology for material conveyance in mineral and metal processing plants, compared with traditional conveyors, as material is sealed inside an enclosed pipe, preventing potential spillages.

Hencon VT has been supplying this technology to diamond corporation Namdeb, a joint venture between diamond giant De Beers and the Namibian government, for its mining operations in Namibia since 2012.

“When it comes to high-value materials, security is essential, therefore, limiting access to the material during processing is crucial,” he says, adding that traditional conveyors are not necessarily secure and increase the risk of material losses and theft.

Further, De Oliveira notes that traditional conveyors take up more space and are often challenging to install inside a processing plant, where space is limited, whereas vacuum technology enables conveying in small, as well as high-up spaces.

However, vacuum technology for the conveying of bulk materials is not a viable replacement for conventional conveyors, which can handle larger quantities of materials and do so more cheaply than vacuum conveying technologies.

Technology Improvement Hencon VT is capable of equipping its vacuum equipment with monitoring devices that log a machine’s position, operation and faults, providing telemetric information about how long the machine has been operating.

The company is in the early stages of refining this technology to include reporting functions that relay information on how much material a machine is collecting, how many operating hours remain until maintenance is due and what parts need to be ordered for replacement.

De Oliveira anticipates that this technology will be ready within the next 12 months – depending on the results of the to-be-confirmed test periods.

Meanwhile, Hencon VT is further developing its Robot Mole technology, which is used to clean spillages under conveyors or other low-access areas at mines and processing plants, to include a hydraulic-driven version.

The Robot Mole is currently only available in an electric- or diesel-driven version, with the machine equipped with a vacuum unit, which operates up to a 50 m range.

De Oliveira avers that a hydraulic-driven version of the Robot Mole is best for smelter applications, where interference with magnetic fields poses a problem.

He adds that the testing is being done at a smelter in Richards Bay and Hencon VT aims to launch its hydraulic-driven Robot Mole before the end of the year.