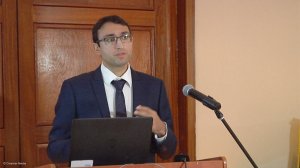 Unctad and the Food and Agriculture Organisation of the United Nations have produced their third report in a series of biennial reports on themes and issues relevant to commodity dependent countries, with this year’s Commodities and Development Report 2017 focusing on the various linkages between the international commodity markets and economic growth and development. (Also watch attached Creamer Media video).

Speaking at the Industrial Development Corporation’s corporate office in Sandton, Csordas outlined how virtually all the countries of Africa were more than 60% dependent on primary commodities and that commodity dependence was on the increase worldwide.

He highlighted how volatility on international commodity markets unsettled growth and how price collapse created far-reaching growth and development disruption.

While at the macro level the fall of government revenues undermined fiscal balance and threatened the continuity of public developmental programmes, at the micro level the drop in the purchasing power of the most vulnerable segments of the population threatened their food security.

“It seems that commodity prices are not going to be increasing by much by 2030. The only exception is crude oil,” Csordas told the media conference attended by Mining Weekly Online.

Against the backdrop of commodity prices remaining relatively low, it was critically important for commodity countries to mitigate the risks associated with commodity dependence.

Among the many case studies on how countries have used or abused their resources is the stark contrast of the way Botswana made its diamond industry drive development and how Sierra Leone did the exact the opposite – and also how inequality increased in Zambia despite copper prices hitting their highest-ever levels.

Csordas emphasised the importance of inclusive growth and pointed to the example of Zambia’s copper boom doing nothing to reduce inequality and poverty.

It was absolutely essential for commodity countries to have resilient economies, which meant saving during commodity price windfalls and using that money to maintain development programmes throughout the periods of low commodity jolts.

It was also essential for economies to diversify horizontally and vertically, add value, expand linkages between the commodity sector and the national economy and invest in social protection, health and education.

As for good governance, that is a basic prerequisite for any country wanting the private sector investment.

Ultimately, the Unctad report said, structural transformation could come about through the successful implementation of the 2030 Agenda of Sustainable Development, of which the SDGs are the core.

• Also see latest comments of Deputy President Cyril Ramaphosa on the CR17 Siyavuma website ahead of next weekend’s important national elective conference of the African National Congress, which states that South Africa must urgently break the ongoing deadlock on the regulation and transformation of the mining sector.
“South Africa enjoys world-class mineral resources – but these are not being properly utilised. It is imperative that we begin to attain higher levels of mining exploration and investment, which will assist us in creating jobs and boosting export revenues,” Ramaphosa writes.