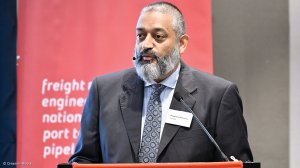 Transnet acting CEO Mohammed Mahomedy outlines the reason for the group receiving yet another qualified audit during the 2018/19 financial year, as well as the dramatic rise in irregular expenditure to R49-billion. Camerawork and editing: Darlene Creamer 30.9.2019

State-owned freight logistics utility Transnet received yet another qualified audit for its 2018/19 financial year and also announced a dramatic rise in irregular expenditure to R49-billion, after locomotive contracts valued at R41.5-billion where added to the figure, which stood at R8-billion at the end of March 2018.

Acting CEO Mohammed Mahomedy stressed, however, that all the locomotives contracts included in the irregular-expenditure amount had been concluded prior to 2015, while the vast majority of the additional irregular expenditure reported had not occurred during the year under review.

Transnet insisted, too, that significant progress had been made to establish adequate controls, particularly in the area of procurement.

The group also attributed its latest “adverse” audit opinion not to the rise in irregular expenditure, but to the posture adopted by its external auditors, SizweNtsalubaGobodo, with regards to tender prequalification criteria previously used by Transnet.

Acting CFO Mark Gregg-Macdonald said the tender prequalification issue, which had been flagged late in the audit process, related to criteria used by Transnet, which if deemed irregular, made the contract irregular and any spending under that contract irregular.

Transnet, which used the criteria to meet Competitive Supplier Development Programme requirements set by government, had since discontinued the practice. Nevertheless, the irregular expenditure associated with the criteria has been calculated to be R1.9-billion of the R49-billion.

SizweNtsalubaGobodo deemed the criteria to be inconsistent with South African legislation, a position that Transnet was disputing. Transnet had initially hoped that external mediation from the National Treasury, which was supportive of Transnet’s stance on the matter, would settle the matter.

However, with the stipulated six-month deadline for the release of results post-year-end approaching, Transnet, which has already delayed the release of its results twice, decided to publish the qualified results and continue with efforts to resolve the dispute in the coming months.

The results themselves were mixed, with volumes and capital-expenditure (capex) falling, but revenue and net profit rising.

Capex fell to R17.9-billion, reducing investment by the group to below the R20-billion-level for the first time in several years and shifting the expenditure balance firmly towards replacement capital, rather than growth capital.

Mahomedy indicated that capex should recover to between R20-billion and R25-billion during 2019/20, but stressed that the figure would be “dynamic” and that Transnet would only invest on the basis for “validated demand”.

Revenue increased by 1.6% to R74.1-billion during the year, while profit for the year increased by 24.7% to R6-billion. Cash generated from operations increased by 0.7% to R35.2-billion.

Mahomedy said Transnet had secured all the funding it required to the end of March, 2019, having raised R6.2-billion during the 2018/19 financial year, increasing its total borrowings to R127.7-billion.

“We expect that Transnet will continue to generate strong cash flows and maintain affordable debt levels without any government support,” he concluded.