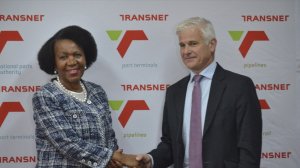 Black-owned and woman-led Kalagadi Manganese and State-owned Transnet have cemented a partnership that will allow for the transportation of an initial one-million tonnes a year of beneficiated manganese in the form of sinter.

The contract will earn Transnet in excess of R3-billion and volumes may increase to three-million tonnes a year.

The Manganese Export Capacity Allocation Agreement (Meca 2) contract includes the transportation, storage and loading onto a vessel of manganese destined for the export market.

The five-year contract will further allow Kalagadi an allocation of both rail and port capacity through the different manganese export channels for the international markets.

Kalagadi Manganese has participated in the Meca programme since inception, mainly through providing forecasts to Transnet for capacity determination purposes.

Kalagadi founder and chairperson Daphne Mashile-Nkosi on Tuesday said she was pleased that Kalagadi had finally reached agreement with the State-owned entity after 12 years of engagement.

“This contract . . . will offer us an opportunity to move up to three-million tonnes a year of product from the Kalagadi mine and sinter plant, in the Northern Cape, through to ports in the Eastern Cape,” she elaborated.

The partnership supports the creation of over 1 250 direct job opportunities through various parts of Kalagadi’s value chain and these will make a contribution of R6.2-billion a year to the country’s gross domestic product, Mashile-Nkosi added.

She elaborated that the partnership with Transnet spoke directly to Kalagadi’s goals of “providing a guaranteed and trusted environment for Kalagadi’s exports”, which are secured from global and domestic economic uncertainties.

“As an entity, we want to be an active contributor to the country’s mission of retaining the position of being the leading exporter of high-grade beneficiated manganese, and this contract gives us the opportunity to make that dream a reality,” said Mashile-Nkosi.

Transnet chief customer officer Mike Fanucchi said this was an indication that Transnet was serious about the integration of its operations to suit the customers’ needs.

“When we [started] with the Meca process, and the integration of our service offering, we only had two manganese companies participating in the export manganese markets,” he explained, adding that this number has since increased.