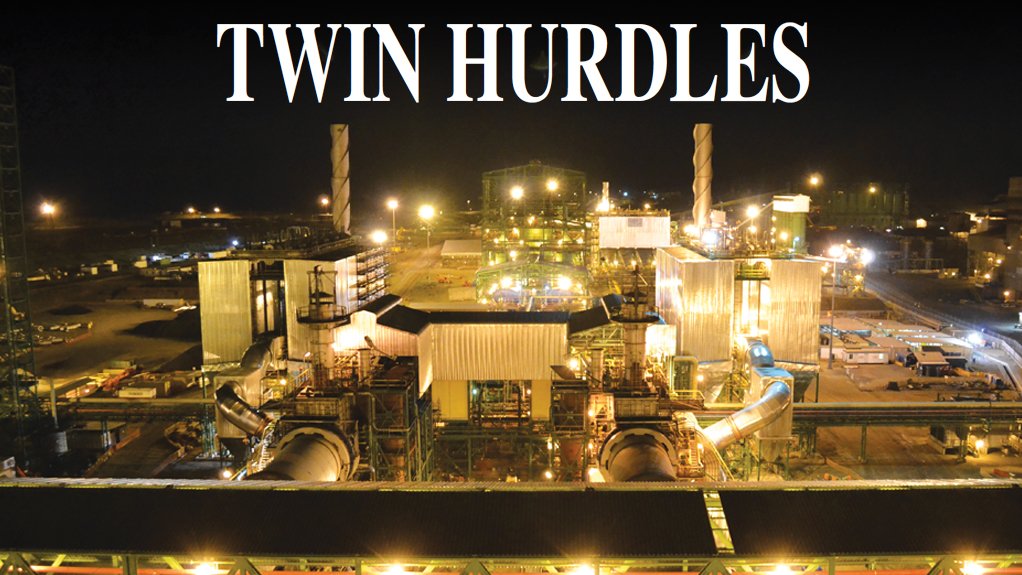 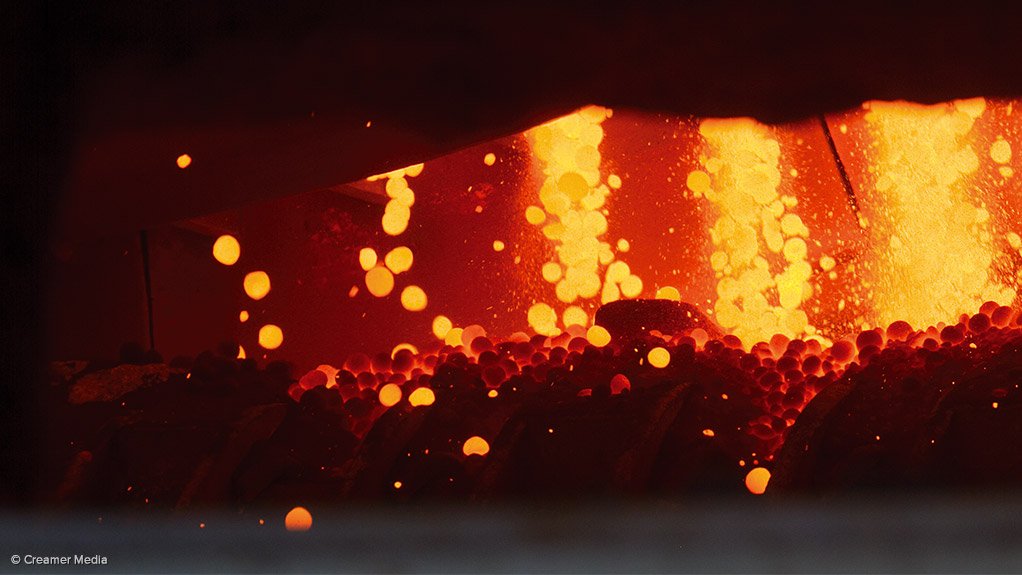 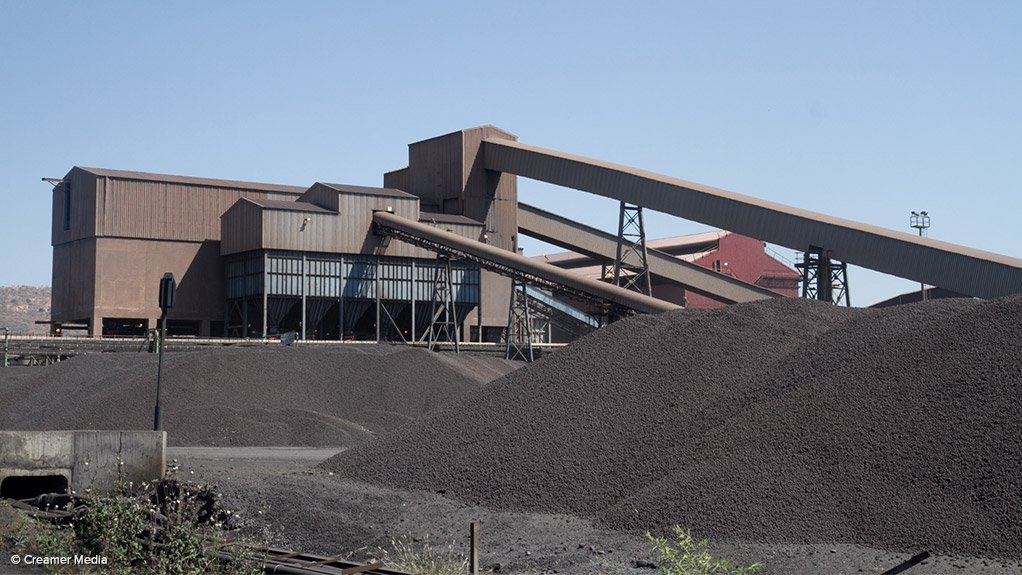 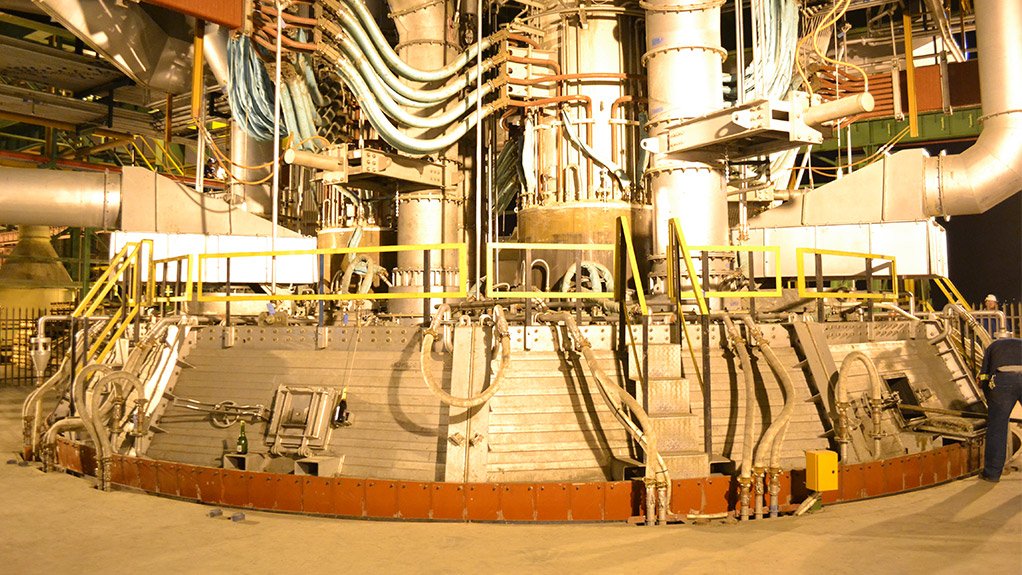 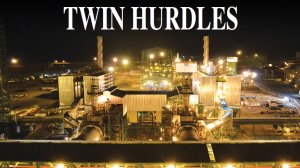 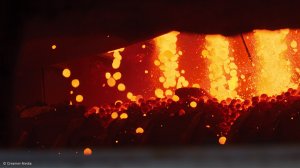 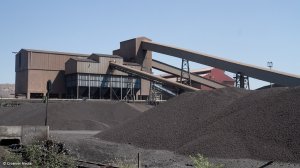 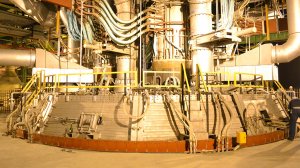 Photo by Duane Daws
CHROME SMELTING The energy consumption of DC arc furnaces have dropped significantly from 4.8 MWh/t to between 3.4 MWh/t and 3.6 MWh/t
Photo by Duane Daws
LEADING THE CHARGE Estimated chromite production for last year reached about 30-million tons, with South Africa leading the charge at 14-million
PREMUS FURNACE Merafe Resources’ Lion Ferrochrome 1 and 2 plants which are using this technology to the maximum extent to reduce energy consumption

Despite South Africa’s rich chromite endowment, the low chromium oxide (Cr2O3) grades in its orebodies and the high cost of electricity are significant barriers to the country becoming the dominant player in the global industry.

Barcza was giving a keynote address at the Southern African Institute for Mining and Metallurgy’s Chrome Colloquium at State-owned research organisation Mintek’s Randburg facilities, in Johannesburg, last month. He noted that South Africa and Kazakhstan, which collectively boast a shipping-grade chromite reserve of about five-billion tons, accounted for over 95% of global chromite resources.

China consumed the bulk of South Africa’s chromite output in 2016, accounting for about 75% of the locally mined ore, a significant proportion of which is produced from the tailings and middlings of platinum-group metals (PGMs) production along the upper group two (UG2) reef.

Barcza pointed out that the amount of chromite along the UG2 reef was dependent on where on the reef mining took place, with middlings and tailings with chromite grades ranging from 3% to 40%, which could be processed to produce Cr2O3 grading 40% to 42%.

However, he noted that chromite pre- reduction research had found that, in South Africa, finely ground chromite that was in close contact with carbon could achieve reductions of over 80% in about ten minutes at temperatures between 1 400 ºC and 1 500 ºC.

Chromite reduction in strongly reducing conditions with carbon was feasible when used in conjunction with the argon oxygen decarburisation (AOD) process, Barcza asserted, explaining that the process was primarily used in the production of stainless steel and made it possible for the lower-grade chromite in South Africa to be used to make stainless steel.

He noted that there was an important difference between iron and chrome reduction, as significant amounts of iron needed to be reduced before chrome started to reduce. “The Premus smelting technology has used that relationship to develop, initially, the CMI plant, in Lydenburg, Mpumalanga, and ferrochrome producer Merafe Resources’ Lion Ferrochrome 1 and 2 plants, which are using this relationship to the maximum extent to reduce energy consumption.”

Barcza highlighted that there were signifi- cant differences in the characteristics of the chromite found in Kazakhstan and South Africa’s chromite. Kazakhstan chromite is significantly richer in magnesium and much lower in iron, with a chrome-to-iron ratio of about 1.5, compared with South Africa’s 4.

He pointed out that laboratory tests conducted by Mintek found that Kazakhstani chromites, even though they appeared to be have a higher refractory index, reduced more rapidly at similar temperatures than South African chromites. “The activation energies show that the reduction of Kazakhstani chromite is four times better and yet there is no prereduction.”

Smelter Process Options During the colloquim, Barcza and his colleague, Mintek consultant Mike Freeman, presented their preliminary findings on the technoeconomic feasibility of three smelting processes to determine the best option to improve South Africa’s competitiveness.

Barcza suggested that preheating chromite fines to between 900 ºC and 1 000 ºC could be the best way to address South Africa’s rising electricity costs. Freeman later pointed out that the price of electricity in Kazakhstan is significantly lower than in South Africa, at $46/kWh, compared with the local price of $65/kWh.

Barcza noted that, in future, the trend could be to employ dc furnaces with suspension preheaters. In the first phase of a greenfield development, hoppers could be installed below the preheaters to feed fixed or bubbling fluidised beds. “If a chromite has the characteristics to be preheated to between 900 ºC and 1 000 ºC in a fairly simple unit that is integrated into the feed system and has the redundancy to fall back and feed directly into the furnace, you will have a very high level of furnace availability,” he said.

However, the most energy efficient, but also the most capital intensive, smelting technology is the Premus rotary kiln, which, Barcza explained, promoted prereduction in the kiln at about 1 400 ºC and reduced chrome to the required level, ensuring the greatest level of efficiency.

“However, compared with Premus technology, a dc arc furnace with preheating to 900 °C consumes 3 MWh/t, which is not a light year away with a process that is effectively a lot less capital intensive; so, the efficiency has increased by almost 60% from the original figures,” Barcza pointed out.

He noted that the two aspects to improve operating efficiency in South Africa’s chromite industry are higher preheating temperatures using a fuel source that is available from the furnace itself and the development of advanced prereduction technology to increase levels of metallisation.

Prereduction technology that could achieve this included composite micropellets with fluxes integrated with a dc or possibly an ESS furnace. He explained that ESS technology differed from other calcine-smelting processes, as it combined fossil fuel preheating and solid-state prereduction of the oxide-containing feed materials with a minimum amount of electrical heating to produce molten alloy and slag in a single furnace.

“There are companies in South Africa and internationally that have patented technology that looks at open-bath smelting and then feeding material into it that can be highly reduced. By using a slope instead of a rotary kiln, it is possible to achieve prereduction by using the combustion energy from the furnace, as with a rotary kiln.

An ESS furnace is being installed at Mintek and should be ready to run in August this year.

Market Conditions Production of chromium-rich ferrochrome, which is predominantly used to fabricate stainless steel, has been dominated by China over the years; however, Barcza noted that South Africa was the leading ferrochrome producer for the first six months of 2016.

He suggested that this should be the norm rather than a break from the status quo, as China should not have any competitive advantage with a resource that accounts for less than 1% of the global chrome resource.

In a videoconference call during the collo- quim, commodities market analysis firm Core Consultants MD Lara Smith asserted that UG2 chrome ore had “fallen off a cliff” after dropping to $60/t in April, subsequent to a period of “steady and at times fast-paced increases”.

She highlighted that China was critical to understanding the market price direction, as the price of chrome ore directly impacted on the price of ferrochrome and stainless steel. “Benchmark prices are typically set these days with one eye on Chinese spot market transactions.”

Smith explained that a general rule of thumb was to expect a period of restocking and higher prices when chrome stocks fell to between 1-million tons and 1.2-million tons and that, when stocks climbed above 1.6-million tons, “you should start taking some precautions; chrome ore stocks are now nearing 2.5-million tons and we should be terrified and expect some market correction”.

Smith explained that the collapse of the chrome ore spot price had a knock-on effect on ferrochrome, with benchmark prices falling $0.11/lb, or 6.7%, to $1.54/lb in the second quarter of this year, ushering in a period of restocking by China, whose stocks started falling in mid-2016, reaching its trough by September that year.

“In the first two months of this year, there was a period of restocking, which lent support to chrome ore and ferrochrome prices, but this restocking period did not end and, by the end of April [this year], stocks [reached] two-million tons from under one-million tons in December last year,” said Smith.

By May, Chinese chrome stocks had soared to 2.3-million tons, while ferrochrome stocks across Chinese plants fell by 15% month- on-month. “The fact that there were no chrome ore stocks to speak of at the plants showed us that, while ore imports kept on coming, producers weren’t buying,” she explained.

Smith asserted that ferrochrome producers were “producing hand-to-mouth”, looking to meet fixed contractual obligations rather than pursuing any gains on the spot market, adding that this was “the perfect setup for a fall in prices and, indeed, this is what happened”.

Meanwhile, during the first quarter of this year, China’s stainless steel output rose by over 19% year- on-year to 6.2-million tons, which Smith linked to higher chrome stockpiles in April that further impacted on prices.

However, Smith pointed out, by May, there had been a drawdown in stainless-steel stock increases, resulting in lower demand for raw material and, subsequently, impacting on the price of raw materials.

“Consequently, we have found that the production of ferrochrome is fairly low, owing to not only plentiful stainless-steel stocks but also [stricter] environmental assessments in China, which threaten to continue for most of this year,” she said, adding that, in a move to dodge high-end electricity tariffs, Chinese plants planned to cut production to preserve profit margins.

“If we consider that spot market transactions tend to drive benchmark settlements, then this – coupled with chrome ore stocks trending higher and, as of the second week of June, being at 2.46-million tons, compared with 2.3-million tons in May – means that demand has literally fallen off a cliff,” she asserted.

Smith highlighted that even European spot market transactions were well below second- quarter benchmark prices and, based on this and the steady rise of Chinese chrome ore stocks, she expected a major decline in ferrochrome benchmark prices over the next two quarters to restore some kind of market balance.