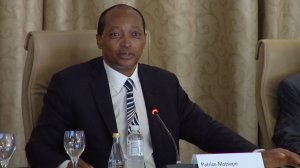 Speaking at question time after ARM reporting a basic earnings loss of R254-million in the six months to December 31, the ARM founder spoke of the importance of the mining industry building community trust and goodwill through creating employment, education and upskilling, including at senior level employment. (Also watch attached Creamer Media video).

Proper training, he said, would ensure that recruitment was strictly merit based, with communities being made fully aware of the losses suffered if mines were forced to close through a lack of profitability.

Motsepe was speaking a day after he attended a mass meeting at the company’s troubled Modikwa platinum mine in Limpopo province, on which R734-million had to be written off in the six months to December 31.

Companies that failed to do so in "this highly politicised environment in South Africa", would end up having problems.

Along with the biggest mining companies in the world, ARM is a member of the International Council on Mining and Metallurgy, which involves a commitment to stakeholder engagement.

“What we have to accept is that we’re going to be impacted by the legislative, regulatory as well as the policy environment. As CEOs and as business leaders, we have neglected this and it is going to negatively impact on our global competitiveness, and we cannot allow that. We are going to have to engage very, very seriously,” he told investors, analysts and journalists at the presentation, attended by Creamer Media’s Mining Weekly Online.

He described the current capacity of the business constituency to influence policy as zero at best.

Part of the starting point in engaging with communities should be that 100% fulfilment of what the communities want is impossible to achieve and should not be targeted.

But continual education of communities is a must and giving in to tender, contract and dividend demands, even during periods of lossmaking, is a must not.

The business community needed to understand that the politicians will throw them under the bus rather than lose community votes.

Certain fights would have to take place during which it had to be emphasised that the most successful economies in the world were those that provided an environment for investment and entrepreneurship.

“We have been such a disaster in presenting our case as to what is good for business in this country,” he charged.

Impairment at Nkomati nickel was another big contributor to ARM’s basic earnings loss in the six months to December 31, when headline earnings rose by 234% to R1 693-million, or 893c a share.

ARM’s net debt to equity ratio of 15.4% at year-end was boosted by a R1.5-billion post-year-end dividend from Assmang.

The jump in headline earnings stemmed largely from the strong performances of the ferrous division and Two Rivers platinum mine.

At Modikwa unit costs for every platinum group metal ounce increased by 7% and at Two Rivers by 9%.

Capital expenditure fell 15% to R209-million, much of it spent on the Black Rock project.