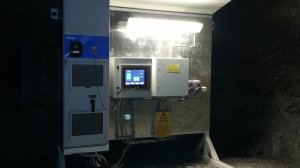 VENTILATION CONTROL Arctic Vent Control is suitable for use in the harsh African mining environment, which is characterised by hot, dry and dusty conditions
CONTROL POINT The hardware of Arctic Vent Control enables the operator to control the mine’s ventilation system

Sweden-based automation and control hardware and software solutions company Gefa System is aiming to collabo- rate with an underground-mining company in South Africa to pilot its ventilation systems software.

Gefa System senior systems developer Joel Sannebjörk says the company has a “concept that works well” and that it is just a matter of finding the right interest in the South African market, which Gefa System plans to use as its entry point into the country and rest of Africa.

The primary ventilation software developed by the company is Artic Vent Control, which can be used to control and monitor fans and ventilation systems. The system includes control modules, operator dialogue and alarm functions; it also creates reports to analyse energy consumption and emissions data.

Sannebjörk says an advanced, energy- intensive ventilation system is necessary in underground mining to ensure a safe and efficient working environment; however, Arctic Vent Control reduces energy intensity as it is modular, scalable and easily integrated into existing systems and software.

“Gefa System can provide a unit to control existing fans and data to existing supervisory control and data acquisition systems through most standard solutions,” he says.

The main functionality of the system is intelligent main and auxiliary fan control, which can be installed in stages. Additionally, the system offers door and temperature control.

The main advantages of Arctic Vent Control include its flexibility, simple operation, improved efficiency and Web-based platform, as well as the low capital investment required to set it up. It can be operated autonomously if communication is lost because it is a decentralised system.

Arctic Vent Control is suitable for use in the harsh African mining environment, which is characterised by hot, dry and dusty conditions. “Our equipment has a record of surviving magnetic dust in iron mines and has an ambient operating temperature of up to 50 °C.”

Sannebjörk also assures local mining companies that the servicing and maintenance of locally installed Arctic Vent Control systems will be hassle-free. “Our system is built with parts from companies that have a well- established presence in South Africa.” This enables Gefa System to incorporate locally preferred and available brands of equipment such as ac drives that are used widely in South Africa.

The company can also provide the training and documentation necessary for a specific mine’s personnel to conduct the regular maintenance and servicing of equipment.

“Arctic Vent Control can be connected to the Internet, enabling Gefa System to perform various tasks, from simple troubleshooting to complete reprogramming of the control software from its offices in Sweden,” he says, adding that because Sweden is in the same time zone as South Africa, the company will be able to conduct services during local office hours.

He notes that the company continuously iterates and improves on the current version of Arctic Vent Control to take advantage of new developments in technology, adding that Gefa System understands that each mine has its own set of challenges. “Thus, we are always working with consultants to make changes to the system to suit different situa- tions.”

Sannebjörk “strongly encourages” underground mines to partner with Gefa System. “Experiencing the benefits of ventilation on demand with Arctic Vent Control is not as complicated as one might think.”