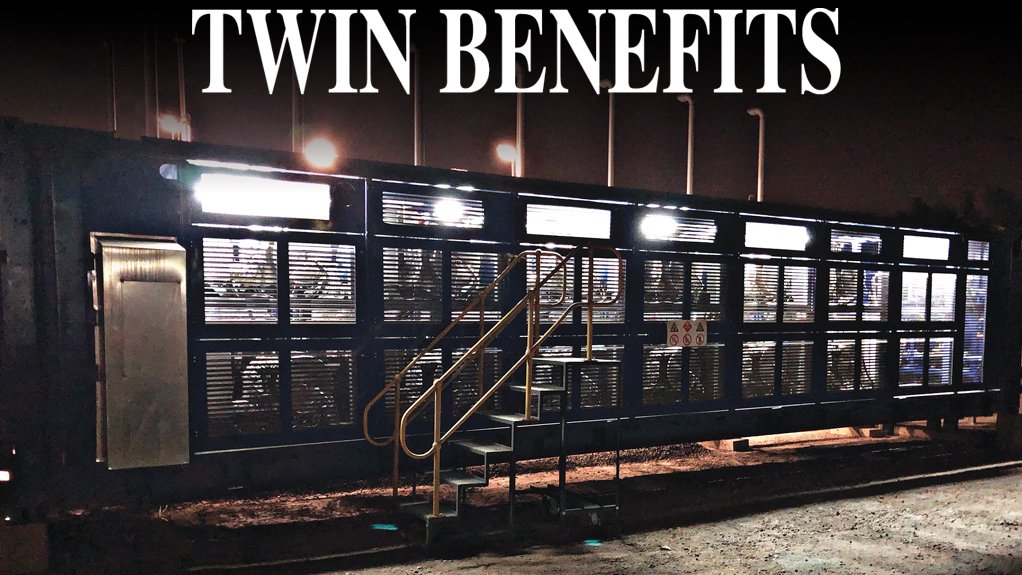 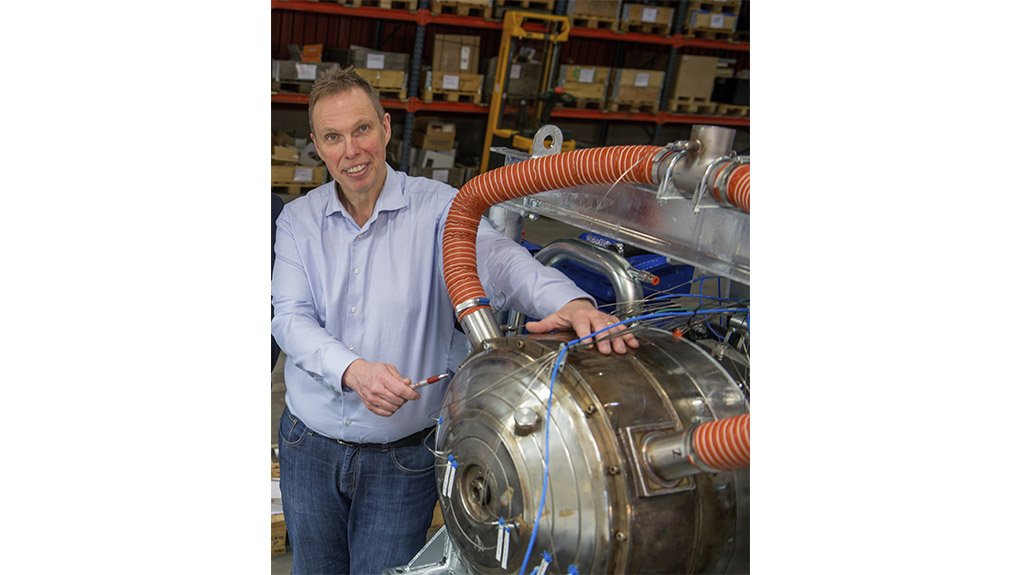 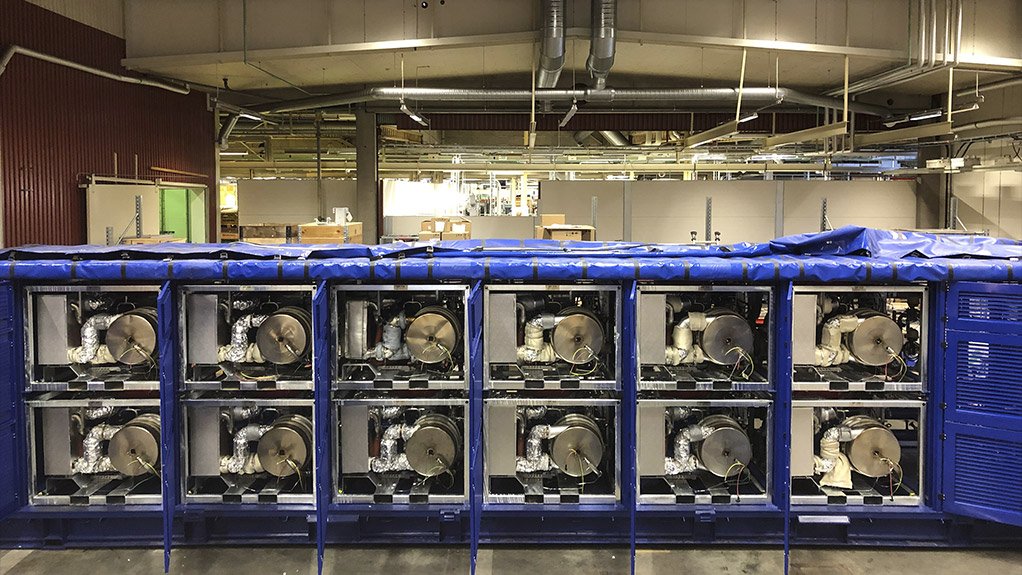 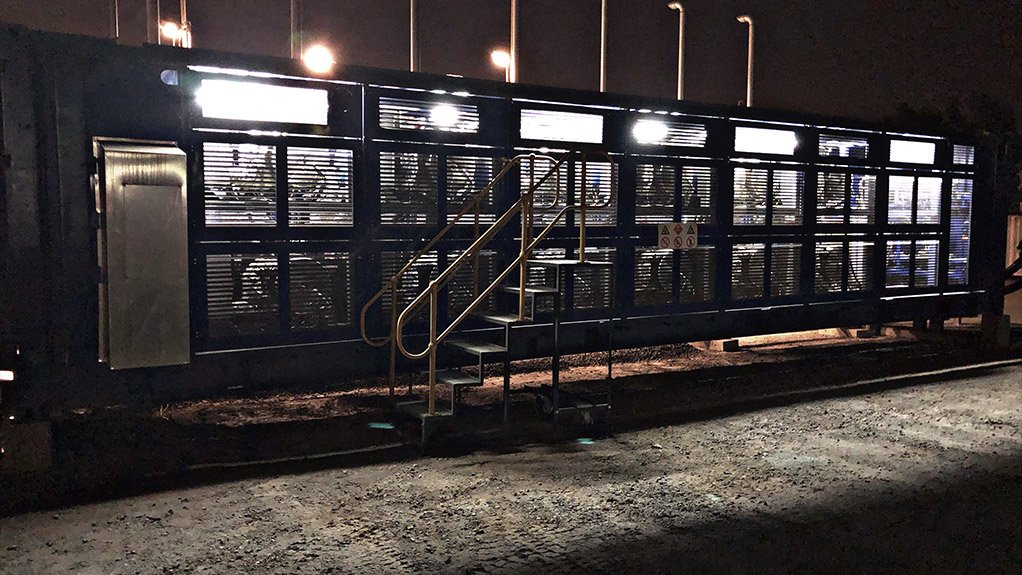 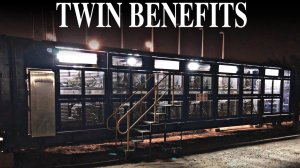 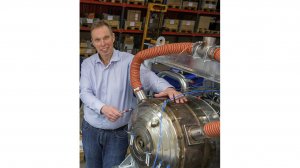 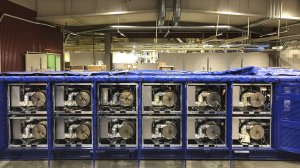 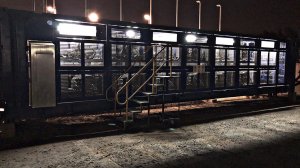 As a considerable user of electricity, South Africa’s ferroalloys smelting industry is significantly affected by intermittent electricity supply and the high tariffs charged by State-owned utility Eskom. The industry is also frequently targeted by campaigners chafed by the environmental pollution it causes.

But an innovative technology from Swedish clean-tech company Swedish Stirling could provide a solution to this dual challenge of costly, intermittent power supply and environmental pollution.

The container is placed next to facilities where the combustion of residual gases takes place and converts the energy in the gas into electricity. The solution, therefore, recycles energy that is wasted in the smelting process.

Swedish Stirling founder and CEO Gunnar Larsson tells Mining Weekly that about 50% of the energy used in modern metal production is converted into residual gases and flared. The PWR BLOK harnesses energy from that gas, thus reducing the amount of electricity that an operation draws from the grid by 15% to 18%.

Reduced electricity consumption results in local generation capacity not being as strained – hence, the risk of interruption should also be lower.

Citing data from independent certification company Lloyd’s Register, Larsson says that the BLOK is the cheapest way of generating electricity currently, with greater carbon dioxide (CO2) savings for every rand invested, compared with any other type of energy source.

While the PWR BLOK technology can be used in all industries that produce flare and residual gas, South Africa’s ferrochrome industry is particularly ideal for this technology.

The South African ferrochrome industry is the initial target market for the PWR BLOK and has been identified as highly important for Swedish Sterling, Larsson says.

Firstly, the company has been active in the country since 2011, boasts a strong local network and is well known in the industry.

Secondly, the price of electricity in the country is high and supply is unreliable, which provides “the PWR BLOK with a very clear value proposition”, says Larsson.

Thirdly, players in the ferrochrome industry are well aware of the large amount of energy that is wasted and that there is considerable scope for significant savings and less dependence on grid electricity if some of that energy could be harnessed.

Currently, the country’s ferrochrome industry generates vast amounts of residual gases that are simply burned, while the cost of electricity constitutes almost one-third of the industry’s total production costs.

Energy consumption is one of the highest cost components of ferrochrome production, constituting more than 25% of average global production costs in 2019, according to research and consultancy company Roskill.

Larsson notes that many producers have tried to recover the energy using internal combustion engines, as well as gas and steam turbines, but most solutions have underperformed or have been too expensive because flare gases are typically of a variable composition.

However, the Stirling engine, with its external combustion, is almost insensitive to the type of gas that is burned or the quality of the gas in question, thus allowing for the conversion of these residual gases into climate-smart electricity using the PWR BLOK.

Larsson notes that this technology is more cost effective than other forms of energy, as the estimated levelised cost of electricity generated using the BLOK is about €20/MWh, while South African ferrochrome producers pay about €60/MWh.

Larsson indicates that the PWR BLOK has the potential to raise the profit at the bottom line by five percentage units.

South Africa generates 87% of its electricity from fossil fuels, according to Eskom. The reduced electricity consumption made possible by Swedish Stirling’s technology would entail a reduction of 3 500 t/y in CO2 emissions for each PWR BLOK installed, notes Larsson.

Swedish Stirling’s first project in the country entailed the supply of a PWR BLOCK 400-F system to vertically integrated specialist alloys producer Afarak, which it installed at its Mogale Alloys processing plant, in Krugersdorp.

This was the first such system to be used in the country.

The system has reduced Mogale’s energy costs and improved the plant’s environmental footprint, while functioning as an alternative energy source to offset the unreliable supply from Eskom.

“We received the order from Afarak Mogale only three months after we had launched PWR BLOK in September 2017 and it was obvious proof to us that we were onto something big.

“This project with Afarak also aroused a lot of interest and curiosity [in] the industry and this paved the way for us to introduce ourselves and present our solution to others,” states Larsson.

Mining Weekly reported in July that Swedish Stirling had signed an agreement that granted it exclusivity in negotiating the installation of, initially, up to 25 PWR BLOK 400-F containers at a 9.9 MW power generation facility at Glencore’s ferrochrome smelter in Lydenburg, Mpumalanga province.

The agreement is subject to definitive agreements being concluded between the parties and Glencore obtaining all the required internal approvals.

Glencore is an entrenched player in South Africa’s mining industry, boasting a strong presence in the coal and ferroalloys sectors, and is also a major contributor to the local economy.

One of the world’s largest commodities companies choosing to invest in such a large commercial project served as a true quality rating for the Swedish environmental technology industry, Larsson said in a statement announcing the agreement in June.

“We now have the opportunity, on a large scale, to prove commercially that PWR BLOK is the cheapest way of producing electricity . . . and that the technology provides greater CO2 savings per invested euro than any other type of [technology].”

Commenting on the Glencore agreement in August, Glencore indicated that the partnership was another example of the company’s ongoing commitment to supporting a transition to a low-carbon economy by incorporating technological innovations.

On completion and once fully operational, the facility will reduce CO2 emissions from the smelter by more than 80 000 t/y – the equivalent of almost 17 000 cars being taken off the road – owing to less electricity having to be bought from the national grid, which is mostly powered by coal-fired plants.

It will produce 9.9 MW at maximum capacity, enough to power almost 2 000 households, and generate carbon credits that can be traded to offset carbon emissions.

“The Swedish Stirling technology we’re rolling out at our Lydenburg smelter has the same effect on the climate as renewable electricity, generating power at lower prices than those of the market, while not increasing CO2 emissions,” Glencore stated.

Citing the cost of power as an increasing consideration across its local operations, Glencore noted that, by investing in clean energy-generating technology, it could pass on these savings to clients.

“We can produce ferrochrome at lower cost for our clients, who, in turn, use it to produce stainless steel,” the company highlighted.

Moreover, the technology would enable it to generate its own electricity at the Lydenburg smelting operation and supply it back to the smelter network.

“It’s another step in integrating sustainability into all our operations and helping to make responsible and sustainable mining a reality,” the company said.

Swedish Stirling’s current focus is the South African ferrochrome industry. It estimates the market potential for this industry to be about 550 units of its technology. The company will prioritise this industry before targeting other markets, says Larsson.

Swedish Sterling has initiated discussions with all ferrochrome producers in South Africa.

Moreover, aspects of the PWR BLOK technology might also be produced in South Africa, says Larsson.

While it is still too early to explore expansion into Africa, Larsson believes that the company’s experience in South Africa would facilitate this.

“When I founded the company in 2008, the major driver . . . was, and still is, that we will write Swedish industrial history . . . However, I never thought our first commercial breakthrough would be in South Africa,” he enthuses.