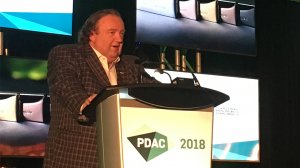 The company relies on its somewhat quirky-yet-imminently-effective strategy called 'Suds', which is an acronym for "shut up and drill stupid", chairperson Sean Roosen told a packed audience of miners and financiers during the recent Prospectors and Developers Association of Canada 2018 convention, in Toronto.

Osisko has had a colourful history, coming full circle from exploration and development, to royalties and financing, and back to exploration and likely development again. It had left its mark in Canadian mining history after it discovered, financed, built and operated the Canadian Malartic mine against odds heavily stacked against it.

The company has transformed from a junior explorer that made the Canadian Malartic discovery in 2003, to a major gold producer in short order, before being forced to sell the mine to the current 50:50 owners Agnico Eagle Mines and Yamana Gold, because of a hostile bid by major Goldcorp, to gain control of the significant asset in 2014. The company was sold for C$4.3-billion, after an initial offer of C$2.7-billion.

At the time, the company spun out its royalties vehicle Osisko Gold Royalties, which had since grown to become the fourth-largest royalties streaming firm, with a portfolio of more than 130 royalties, streams and offtake agreements.

Over the company's 15 years of activity, it has discovered more than 80-million ounces of the yellow metal, a feat few – if any – juniors can boast.

Roosen stressed that the Osisko group of companies is fundamentally backed by exploration and drilling.

One of Osisko's most outstanding achievements was that it was able to finance and build the $1-billion Canadian Malartic mine on time and on budget, which was a phenomenal feat for a single-asset junior at the time. The endeavour has created a 4 134% return for its stakeholders between 2003 and 2014, he noted.

The quality of the Canadian Malartic asset is exemplified by the continued success the current owners are having with growing the resource through drilling, which Roosen said is a good thing, since Osisko Gold Royalties continue to hold a 5% royalty on the asset.

Osisko is taking an active role in exploration expenditure, by investing in the next generation of gold mines through its royalty vehicle and subsidiaries. According to Roosen, royalty companies have now become worth more than the two top miners, reflecting the increasing importance of this pre-production financing mechanism.

Last year, the company accounted for about 75% of all drills turning in Canada, with its 24 rigs turning at Windfall Lake. For this year, Osisko Gold Royalties expects to see more than 800 000 m of exploration on the underlying royalty assets, building on 1.6-million metres drilled on its portfolio since 2016. This represents resource upside for shareholders at zero cost.

SECTOR FOCUS
Roosen, which is a staunch supporter of value creation through the drill bit, lamented the current state of the gold mining industry, with fewer dollars going into the ground in search of replacement reserves.

Between 2012, when the industry spent about $10.5-billion on exploration, and 2015, exploration budgets had fallen by more than 60%, with the declining trend continuing into 2016 and 2017. Exploration budgets are forecast to rise this year for the first time in years.

"Exploration expenditures are extremely cyclical, but also critical," Roosen stressed, noting that while machine learning can assist in processing huge amounts of data efficiently, there is no substitute for drilling to find new resources.

The industry is finding fewer quality deposits, as all the low-hanging fruit is gone, while increased mistrust from the financial sector has resulted in fewer dollars being made available for exploration programmes. The general mining environment has also, in recent years, become increasingly challenged by geopolitical risk, social acceptability, large project capital requirements, low grades and project execution risks.

He believes there is an impending need for more syndication and cooperation in the industry as a viable means forward. Peak production is expected around 2019/20, even when considering the projects that may, or may not get developed, which points to the structural decline of the gold mining industry going forward.

The trend has been exacerbated by generalist investors rather sinking their discretionary funds into current hot opportunities in the burgeoning billion-dollar North American medical and recreational marijuana industries and the booming technology sector.

Further, a growing global trend among institutional investors to switch from actively managed funds to passive and index-linked funds had tapped even more exploration money from the exploration industry. "I've even tried myself, but have never been able or heard of anyone able to get an appointment with a quant computer to listen to investment ideas," he quipped.

Roosen also warned that Canada is losing ground, as more projects and interests are sold to foreign buyers. This, he said, will hurt the country in the long run.