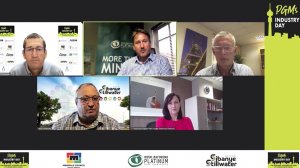 It follows Sibanye and Impala Platinum's sponsorship of research by BASF into platinum substituting palladium. This was, Froneman said, not to create platinum demand: “That it does automatically. But you’ve got to look at these metals in a basket and you’ve got to get the basket back into balance,” he emphasised.

Questioned by panel chairperson and mining luminary Bernard Swanepoel on Sibanye’s commitment to PGMs marketing, Froneman affirmed Sibanye’s belief in market development, which, he said, was evident from the company’s recent signing of a long-term strategic alliance with Johnson Matthey, as well as its work with BASF.

“We spend our own money and we’ve created very significant platinum demand from the substitution of palladium with platinum.

“The next bit of, let’s call it investment, we’re going to make is substituting rhodium with the surplus palladium. That to me is meaningful,” said Froneman, who reiterated his company’s belief in the strategy of market development

“In AP Ventures, specifically, we have more than 15 companies now actively participating in the hydrogen economy. So, in that hydrogen space we feel quite bullish and we heard Minerals Resources and Energy Minister Gwede Mantashe talking about our hydrogen truck, and I think that’s not the only very important role that we play in developing the hydrogen technologies for heavy duty applications.

“I think there’s advocacy in there and it’s integral to our own carbon neutrality roadmap. And then, we’ve got the continuous in-house development, where we are actively seeking new applications of our metals,” Viljoen said.

Diversification of the risk of having all the eggs in one international combustion engine or ICE basket was being created by Amplats studying its participation in different markets and its development of new markets.

She cited the example of Amplats working with Lion Battery to develop the utilisation of palladium in batteries and pointed out that PGMs use in food security and medicine was also being advanced to ensure that the company had a diverse range of markets.

Battery electric vehicle entry notwithstanding, Amplats felt quite comfortable that PGMs demand remaining strong in the short-to-medium term and investing in the next phase of the future of PGMs was integral to the company’s strategy around market development.