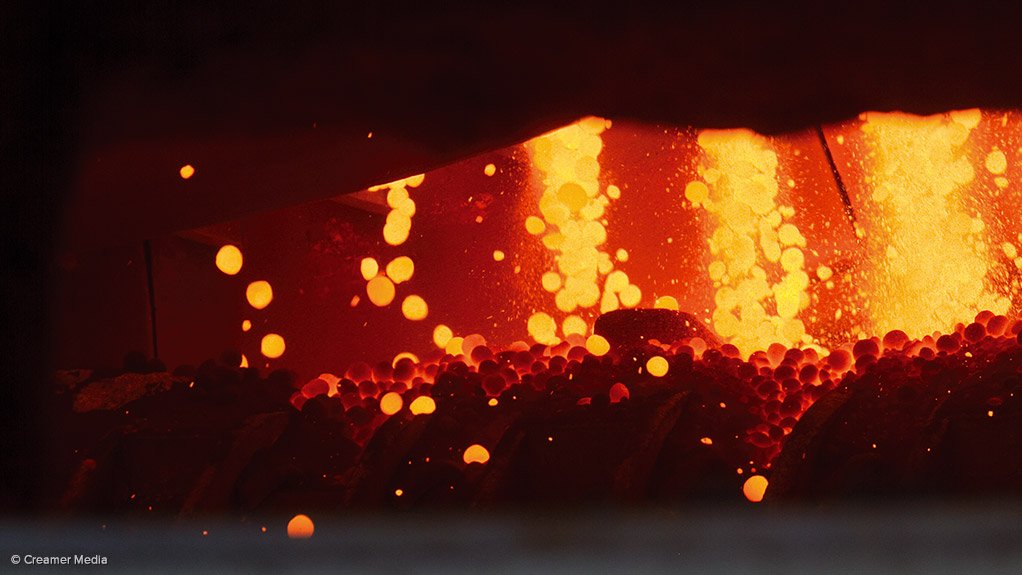 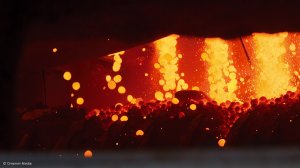 JOHANNESBURG (miningweekly.com) – Ferrochrome and chrome ore prices recovered from rock bottom in the first quarter of last year to levels twice and four times higher respectively in 2017, a year in which a shortage of electricity supply has ceased to be a constraining factor, ferrochrome company Merafe reports.

Despite market volatility in the 12 months to December 31, coupled with the challenges and cost pressures faced by the South African ferrochrome industry, the company, headed by CEO Zanele Matlala, reported the second highest headline earnings in its history – and goes into the new year with a strong demand outlook.

Matlala said in response to Mining Weekly Online that higher ferrochrome and chrome ore prices are expected to continue for the first quarter of 2017, which she described as being indicative of a market still in deficit.

“This is our highest ferrochrome revenue ever and this is also the highest chrome ore revenue ever,” Merafe FD Kajal Bissessor told a conference call in which Creamer Media’s Mining Weekly Online participated.

The JSE-listed Merafe Resources shares in 20.5% of the Glencore-Merafe Chrome Venture’s earnings before interest, taxation, depreciation and amortisation (Ebitda), which increased by 29% from the prior year to R5 702-million in the 12 months to December 31.

Merafe’s revenue rose 29% and its headline earnings per share soared 53% to the highest level in the last five years.

“One needs to strike a fine balance to see what can be done. But all in all, we’re very grateful that there is adequate electricity available,” Zaayman said.

The Energy Regulator has, moreover, approved a 2.2% electricity tariff increase from April 1, which is significantly lower than the increases of the two preceding years.

After more than a decade of ongoing investment in a suite of projects, the Glencore-linked Merafe is in harvest mode.

The projects have included the low-energy Lion smelter complex, the Bokamoso and Tswelopele pelletising and sintering plants, upper group two (UG2) plants and the Wonderkop acquisition.

Merafe – in which the State-owned Industrial Development Corporation is a major shareholder – last year put its diversification plans on hold for another three to five years.

The Lion ferrochrome smelter, owned and operated by the Glencore-Merafe Chrome Venture, uses 37% less electricity and considerably less coke than conventional ferrochrome processes to produce the equivalent volume of ferrochrome.

Instead, all four furnaces collectively use some 4 800 MWh a day, Mining Weekly Online learnt during a visit to the smelter.

The efficient use of energy is the key source of the competitive advantage that places both phases of Lion – known as Lion I and Lion II – in a cost-leadership position.

Efficiency is enhanced through pelletising to cope with increasing volumes of fine chrome ore, in-house training programmes to overcome skills shortages, the proximity of the Port of Maputo, the use of more cost-effective upper group two (UG2) chromite ore recovered from platinum tailings, as well as radically reduced use of expensive coke.

The UG2 ore is sourced from the nearby Mototolo mine, a platinum joint venture between the London-, Hong Kong- and Johannesburg-listed Glencore, black economic-empowerment partner Kagiso Tiso and Anglo American Platinum.

The bulk of the smelter’s ore arrives by road from the Glencore-Merafe Chrome Venture’s Thorncliffe and Magareng mines, which are some 25 km away, and the final ferrochrome product leaves by road in an area not served by rail.

Lion II has doubled the 360 000 t capacity of Lion I to give the Lion smelter a combined capacity of 720 000 t/y of ferrochrome. Lion II was built at a capital cost of R4.9-billion and includes the Magareng mine.

The Glencore-Merafe Chrome Venture owns and operates a number of chromite mines and 22 ferrochrome furnaces, with a combined installed capacity of 2.34-million tons of ferrochrome a year.

Thirteen of these furnaces, situated at Rustenburg, Wonderkop and Lydenburg, use a combination of conventional semiclosed submerged arc furnace and Outokumpu pelletiser technology.

The 396 000 t/y Lydenburg operation pioneered the Premus process ahead of its adoption at the Lion project.

In the first quarter, ferrochrome and chrome ore prices hit rock bottom but started recovering from the second quarter.

By the end of the year, ferrochrome prices had more than doubled and UG2 prices more than quadrupled.

However, on average it weakened 15% for the year.

The Chinese economy, on which the ferrochrome and chrome ore markets are heavily dependent, grew by 6.7% year-on-year, underpinning pleasing growth in stainless steel production.

The company reported cash from operating activities at a healthy R501-million, which prompted the declaration of and a final dividend of R100-million.

Lion II operated fully for the whole year and refurbishments were done early in the year when demand was slower and has allowed for increased production in the winter months as demand was picking up.

On the labour front, the western mines’ three-year wage agreement of 2014 is up for renegotiation in the second half of this year, with the eastern mines’ agreement expiring in 2018.

Production costs were managed well below inflation, despite above-inflation electricity and labour costs, higher UG2 input costs and the impact of the weaker rand on imported items.

The main reason for the good cost performance were low-cost volumes from Lion II, overall higher production volumes and various cost-saving initiatives across the operation.

China, which produced 64% of global stainless steel, showed the biggest growth of 13.3%, followed by the US at 6.7%, India at 6.6% and Europe at 1.8%, driven by strong performance in electronics, automotive, machinery and equipment.

China showed the highest growth of 9.4%, accompanied by growth from the European Union, the Americas and India.

First quarter ferrochrome prices reached historical lows of US$0.54/lb, but signs of recovery emerged in the second quarter and by the end of 2016, prices had more than doubled to US$1.35c/lb, driven by a surge in Chinese stainless steel production.

Global ferrochrome production increased by 4.9%, China increasing by 11.8% and Kazakhstan by 19.2% owing mainly to new capacity.

South Africa, on the other hand, registered a ferrochrome production decline of 3.2% owing to the exit of three producers in 2015.

Chrome ore stocks at the Chinese ports were estimated to be 1.5-million tonnes at the end of 2016.

Like ferrochrome, chrome ore prices hit rock bottom in the first quarter with UG2 prices dropping to $80/t. However, by December UG2 prices had recovered remarkably to around $400/t, a 400% increase, driven by increased demand from mainly China and supply constraints, Matlala told mining analysts and journalists in the conference call in which Bissessor described the results as being “nothing short of exceptional”.

Ferrochrome sales volumes were up 18% to a record 437 000 t, which Bissessor put down to “the huge effort by the marketing team in a tough market”.

Whereas the net ferrochrome prices were down 7%, the price recovered significantly in the last quarter, with realised December prices 88% higher than the year’s lows.

Ferrochrome revenue at R4 923-million and chrome ore sales at 372 000 t were the highest ever.

Ninety per cent of the after-tax profit was earned in the second half of 2016, boosted by 33% higher ferrochrome prices and a doubling of chrome ore revenue on 60% higher volumes and 69% higher prices.

Cash generated from operating activities was significantly down on 2015 owing to a lot of the 2016 revenue being earned in the last quarter. With 90- to 120-days debt return, cash will largely be collected in the first quarter of 2017.

It has total net debt at Merafe level of R409-million, which reduced by R38-million year-on-year.

The company, which is left with significant headroom of R774-million, remains committed to reducing debt and increasing dividends.

Going forward, a minimum of 30% of headline earnings will be declared as dividends.

In addition, special dividends will be declared if there is surplus cash not required by the business.

Merafe expects sustaining capex to be in the region of R300-million a year going forward.

“It is higher than previously, which is mostly to do with the fact that we have more plants and the plants are getting older and also inflation comes through in that line so we think sustaining capex going forward will be at the R300-million a year mark,” Bissessor explained.

Matlala cautioned, in response to Mining Weekly Online, on the sustainability of the current US$1.65c/lb European Benchmark ferrochrome price, but because it was set at the end of the year, it remains the price for the first three months of the year.

On the capacity to up supply should demand pick up, Matlala said Merafe produced at around the 82% level of installed capacity, which leaves room for a supply increase.

Also, towards the end of 2016 a furnace in Rustenburg was restarted, which has put all 22 furnaces to work.

On the preference of supplying ferrochrome over chrome ore, Matlala reminded that the venture’s main business is that of adding value to chrome ore by beneficiating it into ferrochrome.

“At the end of the day, we are in the business of ferrochrome so the chrome ore that we export is only what we don’t require in our operations,” she said.

On what management can do to lock in current high ferrochrome prices, Matlala said that the company currently does not hedge and left price determination to the market.

“We control what we can and that’s on the cost side,” she said.

On the significant drawdown in stock levels in 2016, Bissessor said the intention is to begin building stock ahead of the next winter because of the higher winter electricity tariffs and targeted stock levels of three to four months.

On the ferrochrome spot market, Bissessor said only a small percentage of sales are at the spot price.

On plans for mergers and acquisitions, Bissessor said currently there were no plans to diversify but should ‘dripping roast’ opportunities arise, they would be considered.