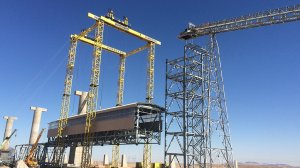 Using strand-jacking technology as a heavy lifting method in mining and construction projects is a key focus for international heavy-lift specialist Vanguard, which tells Mining Weekly that applying this technology is proving to be an economical solution, also enhancing worker safety and performance quality.

Vanguard engineering manager Ron Wiggill stresses the advantages of this method in facilitating closer quality control, as monitoring the quality of the construction of the structures is easier at ground level than doing so when working at heights.

Safety is enhanced because the strand jack is always mechanically secured, with the load that can be kept in suspension for extended periods if necessary, Wiggill says.

“Moreover, large aerial structures can be built at ground level and lifted into position when complete, thereby reducing the risks, time and expense of working at heights,” he avers.

Project Application Wiggill notes that a Vanguard strand jack lifting solution resulted in significant cost savings for a mining major in Zambia in May 2014, as well as more recently for a mine in Namibia in August.

The company was requested to assist with lifting and placing four preassembled sections of a stockpile conveyor gantry into position 30 m above ground for the mine in Namibia. The initial request was to execute these works using large cranes, with the final construction being done at height; however, Vanguard conceptualised and engineered an alternative project solution using four strand jacks, each with a 70 t capacity, Wiggill notes. In the Zambia contract, strand jacks with a lifting capacity of 400 t were used.

Vanguard contracts manager Roger Rousseau points out that using this technology for the engineered project solution “was also more economical, as the cost of deploying large cranes for an extended period is very high and uncompromising in the face of any unforeseen delays in schedule”. Four sections were lifted – with three weighing 115 t each and one 150 t, including a tripper car – with each gantry section being 50.4 m in length.

The conveyor gantries were connected to and lifted by the strand jacks using high-tensile steel cables, known as strands. The lifting was computer-controlled using intelligent software that operated the four jacks in unison within minute tolerances. To construct the framework in which the jacks could operate, four lattice towers were erected and connected horizontally by two pairs of header beams, one pair on either end of the load.

Two traversing lift platforms, which each carried two strand jacks, were individually placed on a pair of header beams. This arrangement also allowed for the lateral movement of the load to the required position. “For this application, we engineered additional lattice structures and compression beams for the specific 43 m tower configuration required, and link joints to connect the header beams to achieve the 22 m horizontal span required between the towers,” Wiggill explains. The equipment was mobilised from Vanguard’s Johannesburg yard to site, where it was assembled. He notes that the client was unfamiliar with strand jacking prior to this project and, therefore, extensive engagement on the concept was necessary. “Many in the industry prefer to use what they know. It was, therefore, pleasing to successfully implement this concept within client deadlines and budget,” Rousseau acknowledges.

Wiggill agrees, further highlighting that a key advantage of the technology is that strand-jacking equipment can be transported in containers, which is quite useful at more remote mining and construction sites, where large cranes are not readily available and costly to establish. Strand jacking is also suitable for situations in which lifts are dimensionally large and cumbersome to handle, where loads have several lifting points, where more than one crane is required to lift, where loads are not equal in weight and need to be kept horizontal during the lift and when extreme accuracy is required during the lift and/or placing of the load, he adds.

“If designed correctly, the structures onto which the conveyor gantries are being placed or connected to, can also be used as the lifting structure onto which the strand jacks are mounted, as was the case for the Zambia contract. This saves unnecessary mobilisation and design of lattice portal structures to lift off of, thereby making the lifting process more efficient,” says Wiggill.

Rousseau, however, acknowledges that, while strand jacks have been used worldwide for some time, their versatility and benefits are not as well known in steel construction in Southern Africa.

Wiggill agrees, adding that few industries understand the concept, while a general belief posits cranes as the only lifting method available. He therefore suggests that the best way to market strand jacking is to continuously educate the market on the capacity, diversity and benefits of this particular technology.