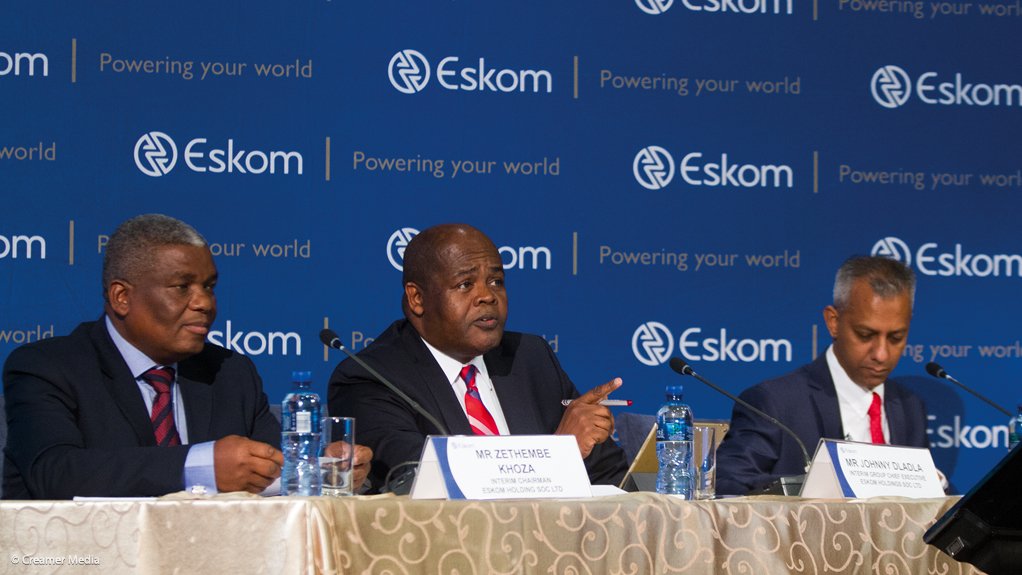 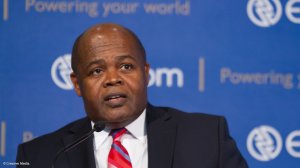 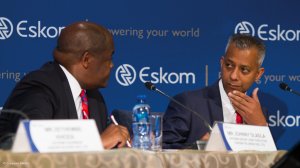 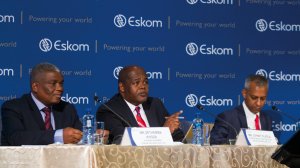 South Africa’s worst kept corporate secret was confirmed on Wednesday, when Eskom reported a sharp fall in after-tax profits to R888-million in 2017, from over R5-billion in the previous financial year. However, the results were all but overshadowed by serious allegations of corruption and maladministration at the utility, which has become the focal point of claims of State capture by a predatory elite.

The results were also presented against the backdrop of renewed anxiety over the financial health of the State-owned company – an enterprise that has already received material direct support from the taxpayer and which is currently relying heavily on a R350-billion government guarantee to raise capital, most recently from the China Development Bank.

Interim CEO Johnny Dladla opened his presentation, which was followed by a marathon question and answer session, by acknowledging the reputational degeneration afflicting the organisation and promised to prioritise interventions that would address conflicts of interest and allegations of corruption.

He announced that he had instituted an independent investigation of the controversial McKinsey/Trillian contract, which had seen Eskom paying McKinsey R900-million and Trillian R495-million, despite it never having entered into a direct contract with Trillian, which has ties with the controversial Gupta family.

Dladla, who indicated that Eskom believed Trillian to be working as a McKinsey subcontractor, promised to disclose the contents of the investigation once it was complete. He also reported that McKinsey had been suspended as a supplier and was “no longer on the premises”.

Responding to the announcement a McKinsey spokesperson said: “We mutually agreed to suspend our work with Eskom on 10 July. We wrote to Eskom confirming this. The decision to suspend work was mutual, as both parties are undertaking their own investigations into this matter. We have agreed to cooperate with Eskom’s investigation."

However, McKinsey denied that it ever had a subcontract with Trillian either for the work on Eskom's corporate plan or the turnaround programme. "McKinsey never entered into a contract with Trillian for work on Eskom's turnaround programme because, following our due diligence review, we had concerns about its ownership. We clarified this in a letter to Eskom in March 2016, in which we informed Eskom that we had terminated plans to work with Trillian as a supplier development partner on the programme."

McKinsey said it was never asked to approve any payments made by Eskom to Trillian on Eskom's turnaround programme. "Any such payments would have been reviewed and approved by Eskom, based on its assessment of the work performed by Trillian. We have been informed by Eskom that payments made to Trillian for its work on Eskom’s turnaround programme were audited by a third party, retained by Eskom."

Chairperson Zethembe Khoza confirmed, meanwhile, that disciplinary proceedings had, finally, been instituted against previous interim CEO Matshela Koko, following a June 23 report by Cliffe Dekker Hofmeyr and auditor Nkonki confirming conflict-of-interest issues relating to Koko’s stepdaughter, Koketso Choma. Choma was a shareholder in Impulse International, which received Eskom contracts valued at around R1-billion from a division overseen by Koko. The charges were drafted and dispatched to Koko, who has been on leave from Eskom since late June, this week.

The utility would also subject itself to an investigation by the Special Investigations Unit (SIU), after Public Enterprises Minister Lynne Brown confirmed this week that a request for such a probe had been delivered to both President Jacob Zuma and Justice and Correctional Services Minister Michael Masutha. She expressed the hope that the necessary Presidential proclamation would be signed soon.

The Minister described the SIU probe as a “deep dive” into all allegations that had emerged from several previous investigations at the utility since 2007. However, she told Engineering News Online that the primary focus would be on allegations of maladministration and corruption that had persisted since 2010.

Eskom was also preparing itself for Parliamentary inquiries during August into some of the allegations, including claims of corruption surrounding a R650-million prepayment to Tegeta, which enabled the Gupta-linked mining company to buy the Optimum mine out of business rescue in 2016.

Questions were also being asked about an arbitration settlement of R577-million against Tegeta, in light of Eskom’s original R2.1-billion claim against the previous owner of Optimum, Glencore. Glencore placed the mine into business rescue partly as a result of the letter of demand, but also because of the “onerous” nature of the contract to supply the Hendrina power station at R150/t. It subsequently emerged that Mineral Resources Minister Mosebenzi Zwane had participated in a trip undertaken by Tegeta officials to Switzerland to negotiate the transaction.

Besides the discounted arbitration settlement and the prepayment, Eskom also placed a contract with Tegeta to supply the Arnot power station from the Optimum mine after failing to reach agreement with Exxaro on an extension of the cost-plus contract at the Arnot colliery, which would now be closed. Eskom also confirmed for the first time at the result presentation that it had approved a R1.6-billion guarantee to facilitate the Optimum purchase, which was subsequently cancelled.

However, Khoza said the board had found no justification to suspend Anoj Singh as the company’s CFO, despite the fact that he had been involved in both the Tegeta and Trillian matters and notwithstanding reports of ties to the Gupta family, both while at Eskom and during his tenure as Transnet CFO. It has been reported that Singh travelled to Dubai on more than one occasion as a guest of the Gupta family.

Singh reported that he was in the process of preparing a “tell-all” document offering details of the visits and promised to release full details to the public in the coming few weeks.

“[The Dubai trips] are something I have been dealing with in the last couple of weeks . . . and I am in the process of preparing a document that I will be sharing with the board, the Minister, the Portfolio Committee on Public Enterprise, as well as the Standing Committee on Public Accounts relating to those matters. So I would ask that the board, as well as the media give me some time to complete that document and, once it is complete, we will share that with all the relevant stakeholders, including the media,” Singh said. He also denied that he had ever accepted a bribe.

Separately, Transnet has appointed Werksmans Attorneys to conduct a board-led probe into allegations of corruption relating to its purchase of locomotives for China South Rail (CSR).

In addition, court proceedings were also under way involving the Eskom’s previous CEO Brian Molefe, who resigned under a cloud last year, but was reinstated for a short period after Brown rejected a planned R30-million pension pay-out, which was subsequently shown to be in breach of Eskom’s own pension fund rules.

‘EMPHATICALLY’ NOT IN FINANCIAL DISTRESS

Khoza, Dladla and Singh dismissed recent media reports that the company was in severe financial difficulties and down to it's "last R20-billion", with Dladla responding to a question as to whether it was in distress with an “emphatic no”.

Singh added: “Based on the information we have at our disposal, I don’t think we can be classified as being in financial distress and one of the key indicators . . . is that these financial statements, which includes a report of the internal auditors, do not raise any going-concern issues relating to Eskom.”

Brown, meanwhile, insisted that Eskom was in a "better financial position than it was a year and two years ago".

Notwithstanding the fall in net profit, Eskom reported a 14.4% rise in earnings before interest, taxes, depreciation and amortisation (Ebitda) of R38-billion and a 7.9% rise in revenue to R177-billion.

Questioned whether Ebitda was the best measure of performance in the context of the utility’s high debt levels, which rose to R355-billion at the end of March 31, 2017 Singh said that the ratings agencies all focused on Ebitda rather than net profit. He said they paid particular attention to the multiple of Ebitda to debt.

Net profit had fallen, Singh said, as a consequence of a rise in its asset base, as it introduced generating units at Ingula, Medupi and Kusile. “Those assets have a much higher asset value and, therefore, there is an increase in depreciation.” Interest costs could also no longer be capitalised as the plants were brought into operation, which had resulted in a rise in interest costs.

Depreciation rose 22% to R20-billion, while net financing costs rose 82% to over R14-billion. Eskom also reported a 13% rise, to R33-billion, in employee-related costs.

However, Singh stressed that Eskom had no immediate intention of approaching the National Treasury for further support, indicating that it still needed to seek clarity from Finance Minister Malusi Gigaba on what “soft support” was envisaged for the utility.

In releasing a 14-point-stimulus plan for the South African economy last week, Gigaba said Eskom was experiencing “hardship” and indicated that support would be forthcoming. Eskom believed this related to the possible use of the Government Support Framework Agreement, which guarantees support for the State-owned utility in meeting its obligation to buy electricity from renewable-energy independent power producers. However, it would need confirm the position with the National Treasury in the weeks ahead.

Eskom again reported a fall in electricity sales volumes, which declined 0.2% last year, despite a 12.1% rise in international sales to the rest of the region. Industrial and agricultural demand fell by 3.7% and 5.7% respectively, which Eskom attributed to lower ferrochrome demand and the drought conditions during the period, which reduced pumping by farmers.

Domestic power consumption had declined by 0.5% a year on average since 2006, led by large power users, where the fall in consumption was calculated by Eskom at 1.7% a year over the past ten years.