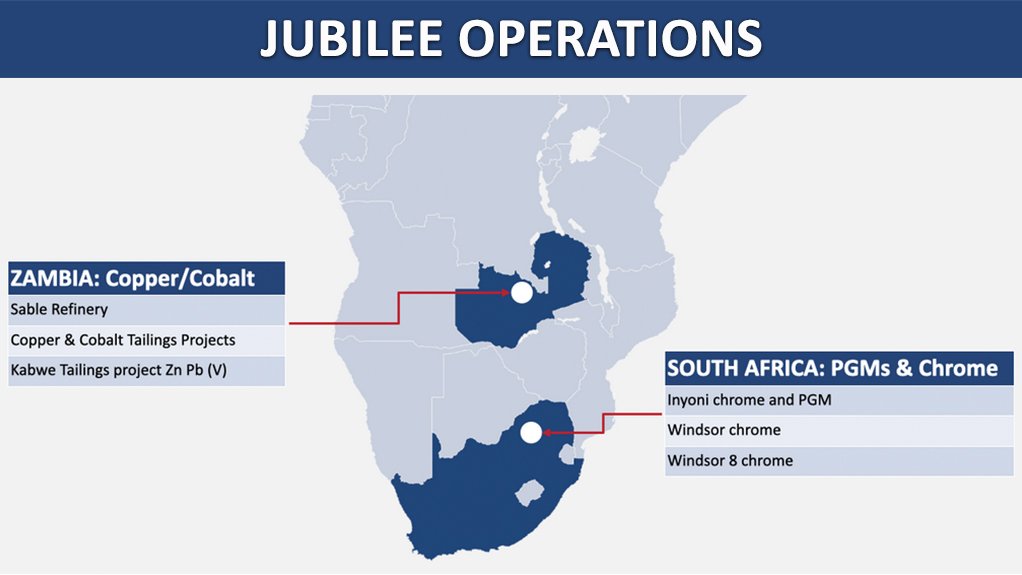 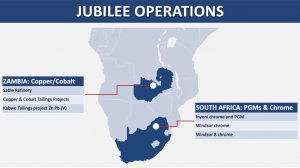 JOHANNESBURG (miningweekly.com) – Diversified metal recovery business Jubilee, which is rolling out an investment of R786-million in South Africa and Zambia, has offered employment and contractor opportunities to more than 800 people in Zambia, most of which are long term, the company stated in a release on Monday.

In Zambia, the London Aim and Johannesburg AltX company is targeting copper and cobalt through its Project Roan concentrator commissioning and Sable Copper and Cobalt Refinery, while in South Africa, its new and expanded Inyoni Operations is exceeding chrome and platinum group metals (PGMs) throughput targets.

“Crucially, and in line with our goals to promote sustained, inclusive economic growth, the Southern Copper Refining Strategy has resulted in significant job creation, with total jobs filled in Zambia reaching near 800 during the last 12 months,” Jubilee CEO Leon Coetzer, who spent 16 years with Anglo American Platinum, stated in the release to Mining Weekly.

With the completion of the construction of Project Roan, accelerating investment into the Northern Refining Strategy targeting the Luanshya, Kitwe and Mufulira areas of Zambia is also in sight.

Chaired by Colin Bird – formerly of Anglo Coal – and vice-chaired by Dr Mathews Phosa – Mpumalanga province’s first Premier in 1994 – Jubilee is on course towards achieving its PGMs production target of 44 000 oz/y through its 100%-owned Inyoni alone and is targeting 1.2-million tonnes of chrome concentrate a year.

On a chrome by-product credits basis, Jubilee’s net first-quarter cost of producing an ounce of PGM was $433/oz excluding transport costs of $198/oz.

While extracting financial returns, it rehabilitates environments scarred by the surface footprint of historical mining operations, solving air and water pollution issues associated with those installations.

Minimising the environmental footprint of mine tailings contributes to the fight against climate change and the reduction of the mining industry's carbon footprint.

Jubilee’s portfolio across South Africa and Zambia provides exposure to not only PGMs, chrome, copper and cobalt, but also lead, zinc and vanadium, and the recovery circuits for these metals are planned to be incorporated at the Sable Refinery, Jubilee states on its website.