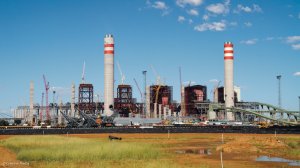 State-owned power utility Eskom is in very real danger of a ratings downgrade, with the energy system on knife-edge at the moment, warns Professor Anton Eberhard, a member of the National Planning Commission (NPC).

South Africa has been plunged into an energy crisis, which Eberhard says is the worst in 40 years. Outages have been commonplace despite peak power demand falling below 2007 levels and actual electricity use far below forecasts.

Maintenance problems and four-year delays in the construction of Medupi and Kusile, in Limpopo and Mpumalanga respectively, are putting immense strain on the system.

“In the past three years, we’ve lost the equivalent of an entire coal[-fired] power station through deteriorating plant availability. Of 87 coal-generating units, 32 need major surgery and three are in a critical condition,” Eberhard told delegates at the WINDaba, in Cape Town, on Tuesday.

Eskom has conceded in Parliament that it cannot guarantee electricity supply security for at least another five years.

Outlining the NPC’s Energy Vision and Plan for South Africa, he suggested that serious and urgent action was needed, particularly on the gas master plan, adding that the economics of the new Mozambique gas pipeline needed to be explored, as well as deep offshore drilling.

Eberhard said the contribution of renewable energy was very important, particularly as solar prices had fallen 68% within the last three years, with a 42% drop in the price of wind energy.

The WINDaba has brought together several hundred people who are keen to strengthen their stake in the wind energy industry.

“If demand is lower, then we only need nuclear in 2037. It calls into question why all the focus on nuclear at this stage?”

“If electricity demand will be lower and nuclear prices are above $6 500/kW, then rather go for gas and other options,” suggested Eberhard, mentioning that the latest nuclear plant in the UK cost $8 150/kW.

Acting CE of Business Unity South Africa Cas Coovadia said he was concerned both about the maintenance of power stations, particularly Majuba, in Mpumalanga, which was only 13 years old, as well as confusing communication around the power outages being experienced at present.

“The silo collapse does point to poor engineering and maintenance. We need to look at maintenance and where the stations are being built,” Coovadia expressed.

He said mixed messages from City Power in Johannesburg and Eskom about outages this week, following the collapse of the Majuba silo, were creating havoc for the business community.

Independent power producer Globeleq GM Mark Pickering pointed out that he was worried that government’s renewable energy programme was not properly institutionalised.

“It can be turned off with the stroke of a pen,” he stated.

Eberhard agreed. “We need to embed this in an institutional system.”