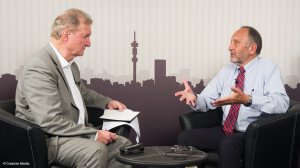 JOHANNESBURG (miningweekly.com) – South Africans, who have been mining for metals for more than a century, were this week urged to farm for metals.

South African-born Stephen Haggerty, a distinguished research professor of Florida International University in the US who spoke to Mining Weekly Online while in Johannesburg, outlined the work that Australians are doing in agromining and prodded South Africa to do the same. (Also watch attached Creamer Media video).

Agromining involves the use of plants to absorb valuable metals from soils that have high metal concentrations, and then to harvest, dry and incinerate the biomas to deliver metal ore.

Plants have a propensity to suck up metals, Haggerty commented to Mining Weekly Online in recalling that the same species of plant that the Swedes used in the Middle Ages to delineate the presence of copper was used centuries later to outline Central Africa’s rich copperbelt.

Now, the Australians are planting these species in mined out nickel belts to suck up the remaining nickel in the soil that is beyond modern metallurgical capability.

“They get nuggets of nickel metal out of it,” said Haggerty – and simultaneously rehabilitate the lands.

Besides nickel recovery, Australians are also using eucalyptus trees to absorb gold in mined-out parts of the gold rush area of Kalgoorlie, in Western Australia.

The eucalyptus trees have the ability preferentially to concentrate gold in the leaves and bark in high concentrations and consideration is now being given to growing eucalyptus trees in many other parts of Australia to recover gold.

“Maybe we should do the same in South Africa,” said Haggerty.

In April, South African geologist Tshiamo Legoale, of the small-scale mining and beneficiation division of Mintek, South Africa’s State-owned mineral and metallurgical research organisation, won the FameLab South Africa competition when she reportedly captivated her audience with a riveting three-minute talk on harvesting gold from wheat crops grown on mine dumps – and then went on to be crowned the FameLab International Champion at the Cheltenham Science Festival in the UK.

In subsequent interviews, Legoale expanded on the absorption of microscopic amounts of gold in the millions of tonnes of material on the mine dumps of South Africa’s gold-endowed Witwatersrand, explaining that gold is absorbed by all parts of the wheat plant except the seeds, allowing for subsequent planting of the seeds and the ensuing harvesting of the cereal as a traditional food crop once its gold-recovery job has been done.

Legoale, who has a degree in geology from University of the Free State, makes the point that phytomining also reduces the exposure of near-dump communities to dangerous chemicals like mercury.

While agromining is regarded as having the potential to provide local communities with an alternative type of agriculture on degraded lands, commercial agromining has not yet become a reality and some believe that to build the case for the minerals industry, a large-scale demonstration may be needed to identify operational risks and provide evidence of profitability.

Interestingly, the Chamber of Mines of South Africa on Wednesday hosted the launch of the Urban Agriculture Initiative in the Johannesburg inner city. The aim of this initiative is to create a vibrant urban agricultural ecosystem by innovatively repurposing disused rooftops and making use of hydroponics and aquaponics to produce agricultural produce for Johannesburg’s inner city communities, an initiative established by the Johannesburg Inner City Partnership.

Although still in its early days, a successful basil crop has been harvested and sold!

Earlier this year, Chamber of Mines president Mxolisi Mgojo mooted the idea of using the vast tracts of lands around South Africa's mines for community agriculture.

Precious metals mining company Sibanye-Stillwater has already catalysed an agricultural project on the West Rand that has succeeded in selling its crops commercially.