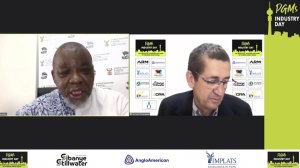 In his opening keynote address to the Platinum Group Metals (PGMs) Industry Day chaired by mining stalwart Bernard Swanepoel, Mantashe said that hydrogen energy was being considered as one of the most plausible choices for alternative energy and as an energy-carrier, owing to the abundance of elemental hydrogen on the planet. (Also watch attached Creamer Media video.)

In this regard, South Africa had established a research, development and innovation strategy on hydrogen, known as Hydrogen South Africa (HySA.)

The strategy, the Minister said, aimed to stimulate and guide innovation along the value chain of hydrogen and fuel cell technologies, which would ultimately position South Africa to derive local benefits from supplying high value-added products, such as PGM catalysts and catalytic devices, to the growing international fuel cells and hydrogen markets. These local benefits included the creation of wealth and new industries, as well as jobs and the development of appropriate skills and human resource capital.

Mantashe said that the South African government was strongly committed to HySA strategy’s ultimate goal of eventually supplying 25% of global PGM-based catalyst demand for the hydrogen and fuel cell industry, based on local technologies.

In this respect, Mintek’s fuel cell catalysts and membranes were currently being commercialised with the aim of supplying the global market.

“We appreciate the work of the various partners who are working towards ensuring that we develop hydrogen fuel cell and lithium battery storage technologies.

"Hydrogen fuel cells have already been successfully deployed to provide electricity in schools and to field hospitals. We now look forward to manufacturing and commercialisation as this will shine the light to the possibility of a new, renewable source of energy while also establishing new uses and markets for the platinum group metals," he said in an official media release.

Work had begun to form an integrated hydrogen ecosystem known as the ‘Platinum Valley.’ This initiative would identify concrete project opportunities to kick-start hydrogen fuel cell manufacturing in promising hubs. The Minister was positive that this would create an opportunity to build a local skills base and lead the country into a new era of energy generation and demand for the PGMs.

"We continue to work with all stakeholders to promote investment through a conducive policy and regulatory framework. This includes efforts to reduce current timeframes for mining, prospecting, water and environmental licences," he said.

Mantashe said the goal was to increase the country’s share of global exploration expenditure to at least 3% within the next five years and he expressed appreciation for the cooperation and work done by all stakeholders in the development of a new competitive exploration strategy.

"This strategy will be the country’s exploration blueprint to attract investment and drive growth in the contribution of mining to GDP. This will be done by identifying barriers that inhibit exploration in South Africa and recommending a set of appropriate interventions to achieve a respectable minimum share of exploration budget from the total global expenditure.

"We believe that we are on the right track with reassurance from the sector in the form of investments realized - particularly from the PGM industry. We welcome, amongst others, the R6.8-billion expansion announcements by Sibanye-Stillwater into their K4 PGM mine and the Impala Platinum investment of R5.7-billion into the expansion of Two Rivers mine in Limpopo.

"Let us continue working together, let us engage to find solutions where there are challenges. Responsible and sustainable mining is everyone’s responsibility, and we owe this commitment to our generation and those to come after us.

"I look forward to more engagements such as these, both virtually and physically in line with the new ways of working that promote efficiency and are time saving. I believe that collectively we can promote and drive the demand for PGMs, create jobs and grow the economy," Mantashe said.

The Minister welcomed the sale of more than 2 000 platinum coins featuring an elephant, attracting investor attention mainly from the US and Asia since their minting in March last year.

“We look forward to the additional coins showing the rest of the Big Five animals to be minted at six-month intervals,” Mantashe said.

Mining Weekly requested Minister Mantashe to explain why the no-licence self-generation threshold has been kept so low. Mining Weekly asked this in the light of Business Leadership South Africa CEO Busi Mavusa criticising the decision by Mineral Resources and Energy to restrict the no-licence self-generation cap to only 10 MW and not to 50 MW, the consensus recommendation of a large number of economists and mining companies.

Mining Weekly: Why is the threshold being restricted to 10 MW when 50 MW would have resulted in billions of rands worth of investment that South Africa needs, plus a lowering of the load-shedding threat?

Minister: You see, in government, when you’re a Minister, you have a boss. Now, my boss is a man called Cyril Ramaphosa. He goes and delivers the State of the Nation Address, and says the cap for no licence will go from 1 MW to 10 MW. Once he issues that to me, that’s a directive. When I go to the department, I say, how do we execute, following the pronouncement by the President. Now when everybody else says 50% or 100%, I don’t take that as a directive. Now, if you want to do some generation for own use, you don’t need a licence. You can go to 1 000 MW if you like, you don’t need a licence. The reality of the matter is that people want 50 MW for access to the transmission and to trade surplus energy. Our argument is that and we’re still arguing with many people, if you say trading with energy up to 50% must not be licensed, then we must withdraw the licence for restaurants and cafes and see what will happen to the economy. Nobody has come back to me. But if you want to generate electricity for own use and you don’t need access to the transmission and you don’t need to trade with the surplus, you can do that without a licence, with no limit. Nobody talks about that. The requirement of self-generation for own use has no limit. Nobody talks about that. And so, you see, she (Business Leadership South Africa CEO Busi Mavusa) is one of the hardest critics of government, very critical to the government sometimes, saying things like they have not done things properly, but fine, that’s how life is. We listen to her…. the regulations remove the licence up to 10 MW, but for self-generation, for own use, there is no limit. I’m repeating that. But people want to generate electricity in the Free State and 'wheel' it to Rustenburg, you see, and they say they must have no licence to do that and we way ‘no’.

The virtual PGMs Industry Day was attended by more than 300 people. In the past, the event was attended by 120 to 150 people, partially constrained by the venue.  “The platform we’re now using is enabling a much bigger attendance,” Swanepoel noted.