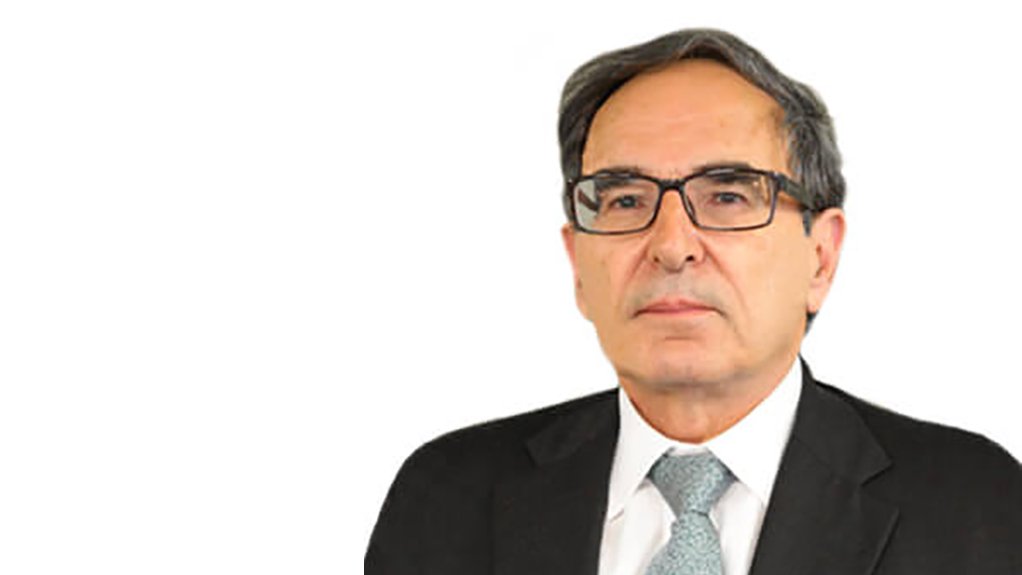 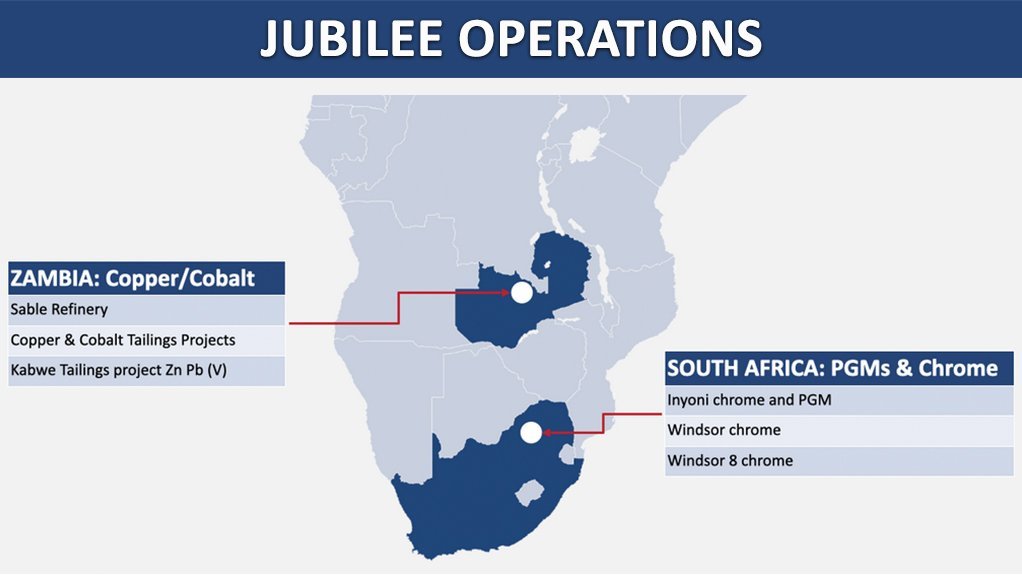 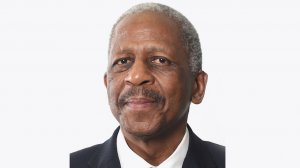 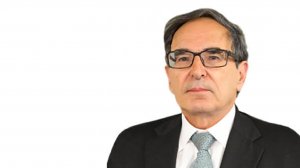 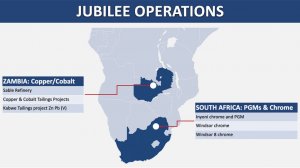 That is the straight-forward view of Dr Mathews Phosa, who was speaking to Mining Weekly in his capacity as the nonexecutive vice-chairperson of the high-flying Jubilee Metals Group plc, a London Aim- and Johannesburg AltX-listed company that is rolling out an investment of R786-million in South Africa and Zambia.

Mining Weekly has watched Jubilee being built from the ground up in the last 18 years. (Also watch attached Creamer Media video.)

In Zambia, Jubilee is targeting copper and cobalt through its Project Roan concentrator commissioning and Sable Copper and Cobalt Refinery, while in South Africa, its new and expanded Inyoni is exceeding chrome and platinum group metals (PGMs) throughput targets.

In line with its drive to expand globally, Jubilee on Thursday announced the appointment of new South American-experienced chairperson Ollie Oliveira, as well as key executive committee changes under the leadership of long-serving CEO Leon Coetzer. Oliveira takes over from outgoing chairperson Colin Bird, who will be returning in a special projects advisory role.

To give focus to its global expansion drive, Pedja Kovacevic has assumed the role of chief strategy officer, and Peet van Coller is the new group CFO.

This is the gist of the question-and-answer Zoom interview with anti-apartheid activist and former Mpumalanga premier Phosa.

Mining Weekly: Jubilee is an eye-catcher but South Africa is very badly short of mining companies like Jubilee, which was prepared to launch from small beginnings in 2004 and then grow determinedly for the benefit of all stakeholders. In your view, what lessons can new mining startups learn from Jubilee’s dogged journey?

Phosa: Jubilee was a mere idea at some point. Leon Coetzer and I started with a company called Braemore. We just had an idea which we took to Mintek. You won't believe it. It took eight years of waiting for that idea to be validated. Tells you a story of good leadership, patience, perseverance, commitment, focus and vision. That's what drove us to be able to wait for those eight years and when it was validated with fanfare, we had to go to London in the cold winter to do a roadshow to the big investors, to sell them an idea, a concept. There was no money on the table. I think the company was only worth R45-million at the time. It was a startup, but we had hope, we had faith and confidence in what we were doing. We were driven by our integrity, honesty, transparency and a willingness to put in as much effort as possible, and to know that no one will get anything for nothing. You need to sweat and toil to create something new for South Africa. There was nothing which you could imitate or emulate. We had to create a new example for South Africa, and today I can say for Africa and for the world.

South Africa is well endowed, but no longer well invested when it comes to mining. You are not only well versed with emerging miners through Jubilee, but you are also very familiar with South Africa’s political and private sector environment. What does South Africa Incorporated need to do to return its minerals potential to far more positive account?

First of all, I need to mention that one of the things we do, which I think government should try and encourage, we build junior miners, black junior miners, and we've built quite a few in the areas where we are in Brits. We're proud of them. We finance them because they don't have capital, but they’ve got assets that need to be monetised. We're doing that to ensure we never run out of feed. We rely on our own feed and the feeds of the small junior miners. I've discussed this with the Minister of Minerals and Energy that unless there's a focus on junior miners, they will not exist. It will just be a pipedream and a good-sounding political speech. South Africa needs to liberalise its mining environment. There are too many regulatory hoops to jump through. I'm a mining consultant. I build mines from nothing. I mean, if you start from when you apply for a prospecting right, you do a geological report, you produce a competent person’s report, CPR, and you get a mining right, you're not there yet. I call it a spaghetti of regulations, which is weighing on the industry and very prohibitive to foreign investors. That's why we need to start being very investor-friendly, and remove the cobweb of legislation, simplify business in the mining sector, and actually across the other sectors as well. The more friendly we become with legislation the better. The wage bills in South Africa are crazy. You can see right now with all these painful, debilitating strikes, with no effort to try and find one another as quickly as possible, with no care for the damage done to the economy. It's not helpful. It’s not only this year, it happens regularly every year. To be swayed by slogans is not going to build the economy. South Africa must create a climate where business and labour can find one another, and conciliation can happen easily. But the legal framework of our country on the mining sector needs an overhaul, overnight.

Also grabbing the copper headlines these days is Zambia. Jubilee itself is in there showing impressive vigour. Why is Zambia attracting far more investment these days and is there anything South Africa can learn from its northern neighbour?

South Africa can learn a lot. We have got plants in Kitwe, Kabwe, Mufulira, all over the Zambian landscape. We're thankful to those who left those mine dumps in the old days through bad technology because now we're able to monetise those dumps and create new jobs and new wealth for Zambia. Zambia’s a new brand on the African continent. It's a brand. It's got a transformational leader who has energy and vision, who understands, as a former businessman himself, that you have to partner with capital, with investors, and show them the picture of your country where investments are possible, and I think His Excellency President Hakainde Hichilema – HH – is doing a great job. He’s a shining example on the African firmament today, who attracts investment with ease. He doesn't make philosophical speeches. He makes simple practical speeches, which a business person would understand, and that's attractive to investors in the world. Zambia has come back. Everybody wants to go and invest in Zambia. Mining companies are tripping each other to get into Zambia, and some of us are encouraging them to go into that country. It’s a great country – great people, peaceful, stable, and the President is leading the charge. I need to compliment President Hichilema for what he is doing for his country, and other presidents must not be shy to emulate his good example, create a climate of stability, rule of law and friendliness to business and to capital – and then the rest will follow.

Are there any other African countries that are showing good potential from a mining investment viewpoint?

There's potential all over. If you take the DRC, in my view there is potential but the intermittent wars in the north create instability. You'll find that most development is concentrated in Lubumbashi, in the south. That country is endowed with the biggest mineral potential on this continent, but it's not being exploited because of political instability. So, we need peace on the African continent, we need democracy, we need the rule of law. People must know when they invest in those countries, they'll be able to take away their profits. That is why you're putting your money in the country, it’s because you want to make profit and politicians need to understand that simple common sense. The DRC has got potential, Botswana is doing well, and Namibia is doing well. I'm happy with Namibia’s stability. Mozambique still has a long way to go. They have a lot of minerals, but they have a long way to go. Lesotho must still find a way of exploiting its minerals – they have, but they must still find a way of doing it. South Africa must reform its regulatory environment and make itself investor-friendly – simple.

In a nutshell, what, in your view, should be the biggest takeaway from this interview?