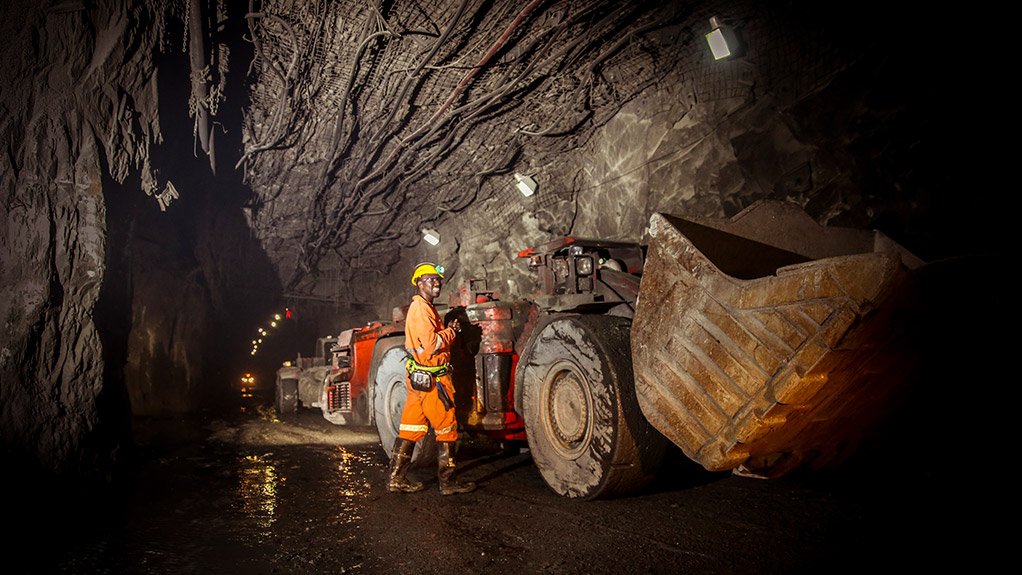 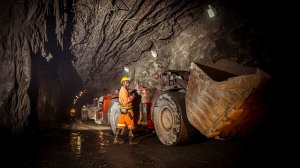 VANCOUVER (miningweekly.com) – Gobal equity markets have been extremely volatile in recent weeks, extending a frantic sell-off of US stocks, which culminated in the steepest plunge for the Dow Jones Industrial Average in six-and-a-half years.

While commodities were not spared from the rout, American multinational investment banking and financial services firm Citigroup says now is the time for investors to add positions in metals. According to Citigroup, demand-led inflationary pressures are a boon for real assets like commodities, as they raise the cost of production and support higher prices, while they are bearish for assets such as bonds.

In particular, Citigroup believes that the solid top-down cyclical case for investments in hard assets such as commodities remains intact.

Goldman Sachs Group shares Citigroup’s optimism, saying recently the environment for investing in commodities is the best since 2004 to 2008.

DoubleLine Capital’s billionaire bond manager, Jeffrey Gundlach, also forecasts that raw materials may be one of the best investment options as they surge during the late phase of the economic cycle.

However, all commodities investments are not equal and some of the most promising mineral deposits are often located in jurisdictions with questionable regulatory approaches that do not inspire investor confidence.

“Money has no conscience and will go to places where it experiences the highest returns for the least risk,” Canada-Africa Chamber of Business president Bruce Shapiro tells Mining Weekly. He is also the president of the MineAfrica initiative, which provides a platform for African mining companies, governments and service providers to get their message out to Africa-friendly invest- ment audiences in Canada and London.

This behaviour has been demonstrated with established miners and a new wave of juniors aggressively consolidating land positions in the most favourable investment jurisdictions such as North America and certain countries in South America.

According to him, a common thread that all developing economies need to grasp better is that there is always an underpinning aversion to risk when considering investment in riskier jurisdictions outside the mature economies of North America, Europe and certain other economic bright spots.

He says investment does not like uncertainty; besides, there are many other countries with fewer problems, less regulatory red tape and more certain policy, and that they are the ones seeing an influx of mining investment for exploration, project development or mine expansion.

A case in point, he notes, is Africa’s most developed economy, South Africa, which currently has legislation on the books that drives investment elsewhere and has a Mines Minister who is the number one defendant in a corruption case. “That does not build confidence among the international investment community,” he notes.

“These are the first places to be shunned when there is uncertainty in financial markets.”

INVESTOR CONFIDENCE
According to TMX Group VP for global business development Rob Peterman, the two main considerations when studying an equity listing are access to capital and liquidity.

“Investors seek clarity about the [rules] regarding disclosures to investors. Canada has formulated a regulatory regime that provides consistency and transparency – two key attributes to attract mining investments,” he says.

Canada’s regime is underpinned by the National Instrument 43-101 tool, applications for which are then prepared by third parties and are then reviewed by geologists within the securities regulatory environment.

The most important aspect is to create investor confidence, Peterman stresses.

According to Shapiro, in Africa, the JSE is one of the few stock exchanges that pass international muster, but, still, in the context of the local regulatory framework, the local market is poorly understood in the outside world, with big questions surrounding liquidity and governance.

However, despite the West being considered in many aspects by market observers as the leaders in mining policy formulation and investment, replicating the leading models is not always suitable for developing jurisdictions, since the various economies are dealing with different issues and social imperatives.

The fact that citizens in developing nations are not all as educated in finance as, for instance, the average Canadian, makes the suitability for successfully implementing something like flow-through share regimes troublesome. “I’ve found that, in these areas, people better understand debt offerings,” he notes.

Canada’s leading independent think-tank, the Fraser Institute, administers its Annual Survey of Mining Companies and ranks jurisdictions around the world based on a combination of their geological attractiveness for minerals and metals and their policy attractiveness. The latest 2016 report showed that Canada had both the best (Saskatchewan) and second-best (Manitoba) mining jurisdictions in the world, while Southern Africa is home to two of the ten worst jurisdictions – Zimbabwe and Mozambique.

Senior director for the institute’s Centre for Natural Resource Studies Kenneth Green points out that what works for Canada does not necessarily work for developing juris- dictions. The latest survey for 2016 demonstrated that miners felt that ‘First World problems’, such as reconciliation and restitution with First Nations and ongoing land claims in Canada, were different issues such as physical security, corruption, employment and labour issues dealt with by miners in these jurisdictions.

According to Green, the primary purpose of the survey is to assist governments in improving their policy objectives for the greater good of their citizens and, as a secondary aim, to help investors better understand the investment risks associated with jurisdictions.

“The one thing investors treasure is certainty in the policies and regulations of a jurisdiction. They don’t have to be perfect, but they have to be predictable and reliable, and they can’t be seen as a risk to the long-term investment that is mining,” he says.

POLICY DEVELOPMENT
In the wake of buoyant commodity prices and a positive market outlook, several African jurisdictions have in recent quarters been signalling sweeping changes to existing mining codes. Among these countries are South Africa, Zimbabwe, the Democratic Republic of Congo (DRC) and Mali.

“Mining is like any other business; it is driven by profit. Investors weigh up risk against return before investing,” he tells Mining Weekly.

Prior to the introduction of the Mineral and Petroleum Resources Development Act (MPRDA), South Africa was a difficult place to operate under the private mineral rights system. The rights were becoming more and more subdivided, Saad explained.

Then, the introduction of the MPRDA resolved this problem and there was an influx of foreign investors. Later, government introduced the Mining Charter. The Minister went as far as announcing at the Investing in African Mining Indaba that it is the duty of investors to comply with the seven or eight ‘pillars’ of the charter, or they risk losing their rights. In addition to that, they have to include a 26% black economic-empowerment (BEE) partner in high-risk exploration programmes.

“Threatening foreign investors is not the right thing to do and the result was inevitable. The investors slowly disappeared,” Saad notes.
The third charter, which is now being challenged in court, requires 51% BEE participation in exploration.

“No investor in their right mind would invest in a country where you are forced to take on a partner who has control over your money. The end result is that foreign investment in any exploration programme in South Africa has dried up, so there will never be an [equity] listing.

“In my opinion, the charter needs to be scrapped and incentives [should be] offered to investors instead. This can either be through tax breaks or the likes of flow-through shares, or whatever. The world is a big place to invest in,” Saad cautions.

Shapiro says he has long been a staunch advocate for jurisdictions to implement flow-through share regimes to blow new life into exploration sectors. According to him, the Canadian government, which boasts one of the most refined tax incentive regimes in the world, has for years been talking to the South African government on implementing a similar incentive scheme.

“Currently, there is little incentive to entice explorers in South Africa, since the legal mesh, the ongoing land claims and extremely volatile labour relations are all risk factors too onerous for many in the investment world. Other than for the advanced infrastructure in the country, why would anyone come to South Africa, if similar mineral opportunities exist somewhere else?”

African jurisdictions also have a duty to demonstrate the rule of law. Shapiro believes that, if Africa can demonstrate the prosecution of corrupt leaders to the full extent of the law, it will, in turn, send a very positive message to the international investment community that transparency and the rule of law are king and ensure improvement in investor sentiments.

“Africa must understand that transparency and the rule of law are key to financial prosperity.”

CSR APPROACH
While Canada’s regulatory approach is arguably the best in the world, by ensuring significant security of investment and the provision of pertinent facts, Shapiro argues it also constrains investment in developing jurisdictions to a degree, as new rules on ethical business practices abroad could hinder investment, owing to increased red tape and costs.

The advanced regulations in the West are increasingly precluding investment in questionable jurisdictions such as the DRC, where forced child labour and military involvement are rampant.

Further, many jurisdiction have ownership limitations or other restrictions imposed on western project proponents, which opens the playing field for the East to swoop in with their less restrictive regulations and conclude deals in African jurisdictions.

“I have for a long time suggested that the World Bank and other international financing organisations introduce a milestone-based approach through which project proponents invest in phases, which will allow for greater investment certainty and risk mitigation. Countries cannot change to democracies with full transparency overnight. This would at least allow for the financing of some projects in less transparent countries,” Shapiro says.

However, he notes that progress is being made on this front and the African Union has created five major economic development regions in Africa, each with its respective chamber of mines to lobby governments on policy issues.

“People tend to lose sight of mining as a long-term investment and any policy changes along the way will change investment perceptions. It’s a hard business and people are risk averse.”

Importantly, corporate social responsibility is one of the best risk mitigating strategies any miner in a developing jurisdiction can implement.

Shapiro points to Africa-focused miner Randgold Resources as an example of how the approach is best implemented to every stakeholder’s benefit. Under the leadership of CEO Mark Bristow, the company is active in several of the riskiest investment jurisdictions in Africa, yet manages to guide for production of between 1.3-million ounces and 1.35-million ounces at a cash cost of between $590/oz and $640/oz for 2018.