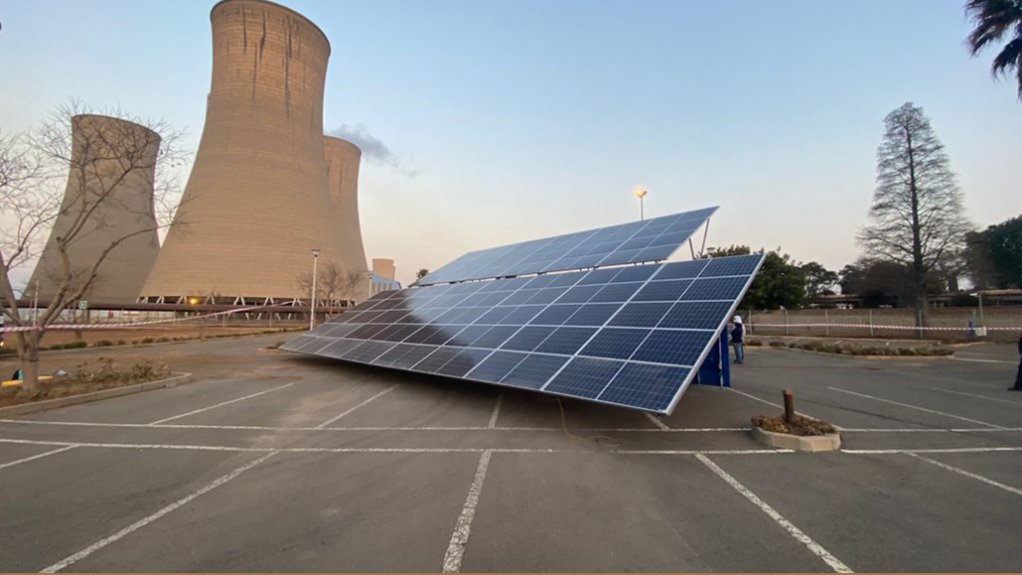 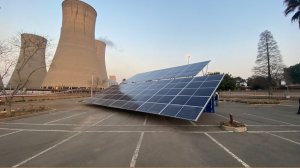 A solar panel in front of the Komati coal station, the last unit of which was shut on October 31

Eskom has announced that the final unit at the Komati power station in Mpumalanga was shut at midday October 31, officially signalling the end of the station’s operating life as a coal-fired generator and the site’s transition to a renewables, storage, manufacturing and training hub – one that could serve as a global reference as several countries consider ways to transition away from fossil fuels while supporting the livelihoods of affected workers and communities.

Komati has been identified as the flagship site for Eskom’s so-called ‘Just Energy Transition (JET) Strategy’, which includes various repowering and repurposing initiatives, including the development of 150 MW of solar photovoltaic, 70 MW of wind and 150 MW battery storage at the retired station.

The utility says the initiatives, which are likely to receive concessional funding support from development finance institutions and developed country governments, are intended to ensure that the existing infrastructure, including the associated transmission infrastructure, support the energy transition and the creation of economic opportunities in the region.

Besides the renewable and storage projects, a containerised micro-grid assembly factory has already been established on site and plans are under way for the creation of the Komati Training Facility in partnership with the South African Renewable Energy Technology Centre of the Cape Peninsula University of Technology, and the Global Energy Alliance for People and Planet to develop the training facility.

The final unit, or Unit 9, was itself commissioned in March 1966 and was the last of nine units to be built at the power station, which began operations in 1961.

Eskom stressed that the shutting down of the unit would not have a significant impact on the national electricity grid or on an intensification of ongoing loadshedding, as Unit 9 was contributing only 121 MW ahead of its closure.

The majority of Komati employees had already been transferred to support and augment skills in other power stations and areas of the business in line with operational requirements.

The remaining employees would take part in the Komati Repowering and Repurposing project and Eskom confirmed that no employees would lose their jobs as a result of the closure.

Komati was previously mothballed owing to the country’s excess generation capacity in the early 1980s, including Unit 9 which was then mothballed in 1989.

The station then featured as part of a return to service programme, which also involved Camden and Grootvlei, with refurbishment commencing on the August 14, 2006. Unit 9 was handed over to the generation division on the December 24, 2008 and re-entered commercial on the January 4, 2009.

“The end of Komati’s coal-fired journey marks the beginning of another exciting journey in the service of South Africa.

“Eskom has developed a comprehensive JET Strategy which places equal importance on the transition to lower carbon technologies, and the ability to do so in a manner that is ‘just’ and sustainable.”