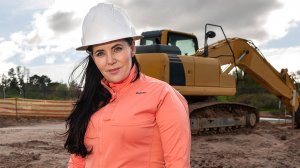 JOHANNESBURG (miningweekly.com) – Shirley Hayes, the founder and CEO of SHiP Copper, into which Big Tree Copper will be reversed when Copper 360 lists on the AltX of the Johannesburg Stock Exchange (JSE) next month, on Monday shed more light on the way forward for what will be South Africa’s only pure copper play on the JSE.

SHiP is a majority women-owned copper company that was founded in 2008. Big Tree Copper, headed by seasoned campaigner Jan Nelson, is already in low-cost surface production of copper through a solvent extraction electrowinning (SX-EW) plant, which the company designed and built innovatively.

“Between the companies, we’ve got scalability, which SHiP brings to the table,” said Hayes.

Big Tree exports one-metre by one-metre copper plate that is 6 cm thick. Each plate weighs about 38 kg and contains 99.89% copper in an area where the copper is said to be exceedingly pure.

SHiP’s orebodies are shallow, and Big Tree has a 15- to 20-year life on the surface material currently being processed. In addition, it is looking at developing the Carolusberg tailings dam, which has about 40 000 t of recoverable copper in it that was mined by Newmont in the old days.

Initial capital required to turn Rietberg mine and plant to account and to develop another concentrate plant on the slag on Big Trees’ operations at the Cape Copper Oxide, Nababeep, would be of the order of R350-million, Hayes calculated.

Openpit pre-development to orebody is already taking place at Rietberg, where a moderately sized 50 000 t a month plant is focused on value rather than on volume. Once Rietberg has been fully developed, which is expected to take about eight months, SHiP will begin development of its Jubilee Wheal Julia openpit complexes, with the additional future funding for the development of more of SHiP’s openpits and other operations coming largely from debt and the balance sheet.

Copper 360 will also hold the Cape Copper Oxide Company and the Okiep Copper Company, and it will hold SHiP. The combined company will own most of the copper district.

Hayes described the offtake agreement with Noble Metals as having very favourable terms as well as considerable flexibility.

Mining Weekly: Are you finding an appetite for investment in copper from local investors?

Hayes: Absolutely, yes. To date, the capital for Big Tree, in which I'm a personal shareholder as well, has come from private high-net-worth individuals in South Africa. Every day, we’re getting phoned by people wanting to know when we’ll list because they want to invest, so there's no shortage of appetite because we will be offering the only pure copper play in South Africa. Our orebodies are on surface or shallow. In the case of Big Tree, it requires no mining so we are on the lowest cash quartile of producers in the world. We have a high margin and we already have, as a result of Coronation’s investment in the company and a commitment to Coronation that we will be paying 30% pre-tax dividend from our profits, a dividend arrangement. We have a fantastic growth profile and we don't have to go anywhere else. It's all in one area. We own a whole copper district. We have copper, we have got scalability, we have got cash flow, and that's why we're getting interest from people that want to invest in the pure copper play like ourselves because there is no other.

Will the copper from SHiP mines be locally beneficiated into copper plate by Big Tree Copper?

There are two processes that we need to differentiate. When we mine the shallow ore, the oxide ore, we produce copper plate through the SX-EW solvent extraction plant. The plant, however, cannot treat sulphides. For the sulphides, we will build concentrate plants that will produce a concentrate of about 35%, which will be sold off. We basically will have two products, two separate products. We can melt the concentrate copper, but to build a big smelter is an order of R1-billion to R2-billion and we're already getting 90% of the London Metal Exchange price for our concentrate, so it doesn't make sense at this stage.

Do you have any plans to make use of the hot Northern Cape sun to generate your own green energy?

Copper makes me smile and the sun makes me smile. Absolutely. We are in the Northern Cape. It's one of those areas where you have strong sunlight for maximum day hours, so we will definitely be looking at that. For me personally, that is the one thing that I will personally drive this company to do and that is to make sure that we will generate power off the grid, as fast as possible.

Give me a bit of your background. You’re deep into copper, you’re the founder of SHiP, you seem to be born with copper and sun. How did this all come about?

I was born in Springbok. It's my backyard. I was mining industrial minerals 100 km north of Springbok, close to the Orange river, for many years and eventually started to do exploration. I just made enough money with industrial minerals to put bread on the table and put aside exploration funding. Then that exploration journey started in 2008. I got my feathers in a row and started to apply for exploration rights. It's ten-plus years later and we’ve developed a cluster mining model on SHiP’s area, where there are a lot of orebodies, and they are all in the vicinity of eight kilometres from one another. Starting to build Rietberg is the next phase of the journey.

As reported earlier by Mining Weekly, Big Tree currently employs 160 people, a figure that is expected to rise to about 300 to 400 people over the next two years.

Big Tree is looking to apply the water available from its processing to agricultural projects in the area, which will create further employment.

Recyclable copper is an electrical conductor second only to silver at a fraction of the cost.