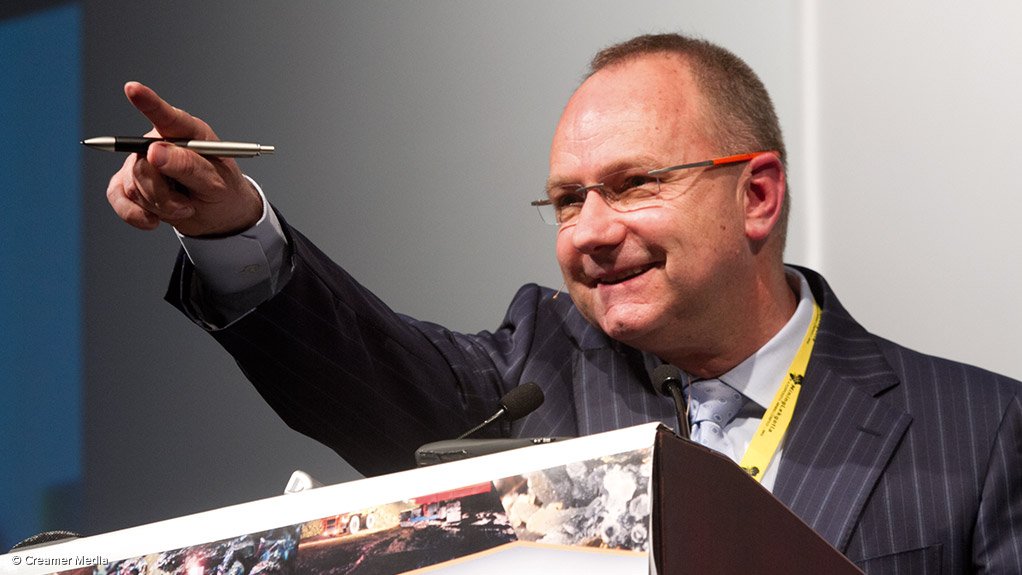 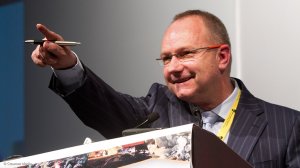 Anglo announced that it would now focus on diamonds, platinum and copper and would exit iron-ore, coal, manganese, nickel, niobium and phosphates.

After announcing a $5.6-billion 2015 loss in the 12 months to December 31, Anglo said it would retain only 16 assets, with diamonds, platinum and copper chosen for their strong consumer orientation and leadership positions.

Anglo is the global leader in diamonds and platinum and has major shareholdings in the Los Bronces and Collahuasi​ copper mines in South America.

“That’s where our focus will be set as we take the business forward,” Anglo American CEO Mark Cutifani told journalists in a conference call from London in which Creamer Media’s Mining Weekly Online participated.

He said in response to Mining Weekly Online that South African assets that would be retained were made up of seven platinum operations and two diamond mines.

Processes were under way for the disposal of metallurgical coal (met coal) in Australia, including the Grosvenor/Moranbah package in Queenland’s Bowen basin, which he emphasised were Australia’s 2015 coal mines of the year.

“The disposals are about change, fixing the balance sheet and making sure we’ve got a great company that goes forward and is not running with one arm tied behind its back,” Cutifani said.

Anglo's open tender process under way for the sale of its South African coal mines would take care of commercial, empowerment, social, labour and electricity-delivery aspects.

“We have a shortlist. Each of the groups on the list is fully empowered and we're in conversations with the government, Eskom and the players involved to make sure we understand what’s required in finalising a transaction that meets the needs of each party.

“I’ll expect those conversations to go through the next couple of months and then we’ll see where we land in working out what the final bid should look like, and how that will fit with each of our key stakeholders."

On the sale of its controlling interest in Kumba, Anglo would immediately discuss with each of its stakeholders how best to take the Kumba conversation forward.

Anglo CFO René Médori told journalists that the company would be evaluating Kumba options this week, one of which was for Anglo to sell down its shares or for a demerger of Kumba into a standalone entity.

Médori anticipated a completion of the Kumba transaction “sometime in 2017”.

“For us, creating a great company is about having great assets, running those assets well and having both market and capital discipline,” said Cutifani, who added that Anglo would be free cash flow positive in 2016 after the benefit of $1.9-bilion improvements on 2015 began emerging.

Another $200-million of forecast capital expenditure (capex) had been cut.

An additional $3-billion to $4-billion was being targeted from the sale of additional assets, which would help reduce net debt to $10-billion by year-end.

The medium-term target was to have less than $6-billion net debt, giving a less than 2.5 times ratio of debt to earnings before interest, taxation, depreciation and amortisation (Ebitda).

Detailed negotiations were under way for the disposal of another ten assets by the end of June.

“The change has been significant and it’s touched every part of the business,” said Cutifani.

The exiting of the 69.7% shareholding in Kumba would be done “at the appropriate time and in an orderly manner” and discussion had taken place with South32 to dispose of the 40% manganese interest in Samancor.

Anglo would be talking to Glencore and BHP Billiton about exiting the Cerrejon coal business in Colombia and the Minas-Rio iron-ore project in Brazil had been declared noncore but would still be brought to completion in the next three years, when its disposal would be reviewed against market conditions in 2018/19.

The auction of the South American niobium and phosphate operations was well advanced.

The strategic focus would be on world-class assets and sustainable positive free cash flow to strengthen the balance sheet.

While there was no doubt that selling assets in the current low commodity price environment was tough, Anglo had received above-forecast prices for the assets that it had sold as part of its first-phase disposal programme.

Disposal plans had to be detailed and a broad enough negotiating base had to be ensured.

While this took longer, it did preserve value and the three Tarmac businesses, two copper assets, Rustenburg Platinum and the Callide coal deal had proved that there was still interest in strategic and financial buys from parties willing to pay fair prices.

“We will take the right time to get the value for each asset and we don’t have to sell any of the assets no longer core to the business and that works in our favour,” Cutifani explained.

Anglo, which currently employs 128 000 people, will be reducing its employee complement to about 50 000 people, mostly as part of its disposal programme.

As it sells assets, its employee complement will be reduced by 68 000 to 60 000 and a further 10 000 jobs will go as part of its own cost restructuring and internal efficiency measures

Cutifani said, in response to queries on the debilitating impact above-ground platinum stocks were having on the platinum price, that above-ground stocks were reducing, Anglo American Platinum (Amplats) had itself taken hundreds of thousands of yearly ounces out of the business.

Amplats had consistently cut all ounces that were not generating cash and that practice would continue, leadership which had been followed by other platinum-mining companies that were losing cash.

In the 12 months to December 31, the company had an Ebitda of $4.9-billion, earnings per share of 64c and below guidance net debt of $12.9-billion, in spite of a 24% decrease in commodity prices.

“We’ve taken more cash costs out of the business. We’ve been able to pull our capital expenditure down and we’ve done better on the disposal process than we forecast in 2014,” Cutifani told journalists.

Sales for the year tallied $10-billion and unit costs were cut by 27% in copper equivalent units.

The company recorded a 60% reduction in fatal incidents over two years and a 70% improvement in environmental incidents.