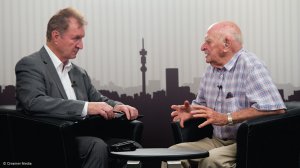 Robinson, who spoke to Mining Weekly Online in a video interview (see attached), says that SBM can be satisfactorily carried out using shock tubes and delayed detonators and would be the equivalent of a 30% increase in the gold price.

“You will resuscitate Welkom, Carletonville and what is left of the East Rand after the Aurora debacle. Even ERPM (East Rand Proprietary Mines) has areas that could be mined,” said the former Sentrachem director of mining chemicals and explosives, who has been associated with the South African mining industry since 1949.

SBM dispenses with the need for roof bolting systems, as the mine roof is not fractured.

“Although you cannot do a blast without some shock waves, SBM’s predominantly going to be a drum roll rather than a big bang.

“With a very simply hydraulic ram, the pile of rocks at the back of the stope is compacted to provide support,” he added.

Only reef will be taken to surface for processing, eliminating the cost of needlessly transporting waste rock.

Haulage and grinding costs are reduced by two-thirds.

SBM, which allows for virtually 100% of the gold to be recovered, would enable the industry to depart from its current position of a significant percentage of precious metal failing to find its way into refined gold bar because of reef being widely scattered during blasting.

SBM involves fracturing rock in such a way that the reef remains intact, and Robinson sees it as an interim step ahead of AngloGold Ashanti’s promising automated raise-boring technology, a fully automated mechanical cutting method that enables mining to continue at great depth.

After retiring in 1990, he formed AC Mining Consulting Services and worked intensively on SBM, which involves fracturing rock in such a way that the reef remains intact.

Equipment for AngloGold Ashanti’s “game-changing” technology, which mines “all of the gold, only the gold, all the time, safely”, is under construction, with the first machines scheduled to become available in the first quarter of 2014.

Figuratively speaking, Robinson is “pretty sure” that SBM could be introduced “tomorrow”.