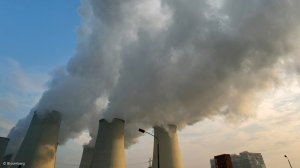 South Africa is the twelfth-greatest emitter of greenhouse gases (GHGs) in the world, as well as the biggest polluter on the African continent, according to German political foundation Friedrich Ebert Stiftung (FES) South Africa director Renate Tenbusch, speaking at a roundtable event on black industrialists in the green economy, held on Wednesday.

Tenbusch noted that the country’s share of global emissions was 1.5% and that it produced half the emissions on the African continent.

“Most of these emissions are released during . . . electricity production,” she stated, citing the National Climate Change Response Policy, tabled in 2011, which documented that electricity generation accounted for 50% of the country’s energy emissions and 40% of total GHG emissions.

“More worryingly, 92% of electricity [in South Africa] is produced from coal. There is a direct correlation between the massive [GHG] emissions and the structure of South Africa’s economy,” said Tenbusch, highlighting the South African economy’s overreliance on the traditional energy and minerals sectors.

She pointed out that the economy was structured around large-scale, energy-intensive mining and the beneficiation of primary minerals, which pushed its energy intensity to above average, with only ten other countries in the world having higher commercial primary energy intensities.

“South Africa’s economy is too energy-intensive and based on the large-scale use of fossil fuels. This strong correlation proves that it is impossible to move to a low-carbon economy without altering the structure of the national economy,” she cited.

Tenbusch further noted that, while most analysts discussed climate change with the limited scope of ecological and environmental degradation, FES was focused on the relationship between environmental destruction and socioeconomic underdevelopment.

She said that democratic societies had to alter patterns of production, investment and consumption to deal with development and that economic restructuring in South Africa had to be anchored in socioeconomic redress.

“Just transitions must be driven by a new sustainable model of industrialisation and this transition should be led by the new African industrialists,” she said.

Tenbusch stated that black industrialists in South Africa should be at the forefront of creating an alternative sustainable economy, not only for the benefit of social cohesion but also out of their own individual interests as entrepreneurs.

Meanwhile, she pointed out that, in 2015, global GHG emissions showed an overall decline for the first time with China, the US and the European Union managing to reduce their emissions.

The reduction of coal-based energy in China was mainly responsible for the decline of these emissions.

However, Tenbusch highlighted that Germany’s decision to reduce GHG emissions and to opt out of nuclear supply has had huge social impacts, particularly for the working class.

THE FOOD, ENERGY & WATER NEXUS
Also speaking at the event, World Wide Fund for Nature project manager Manisha Gulati stated that unless South Africa had a steady supply of energy, water and food, it would not become an inclusive country.

She explained that the food, energy and water nexus stipulated that food could not be produced without electricity and water, and that every part of the country’s water supply chain needed electricity, with 40% of electricity consumption attributed to heating water, in addition to that used to pump water.

“During 2008’s rolling blackouts, the agriculture sector, which consumes a total of 3% of electricity in the country, saw a rising electricity bill of 23%. When farmers were finally able to cope with these hikes, water shortages came in the form of the worst drought the country had seen in a hundred years,” she said.

Gulati added that the current drought had contributed to massive food price hikes and a major shortage of food.

“Before the drought we were exporting maize and sugar, but we are now importing maize, the staple food of most people in the country,” she said.

Gulati pointed out that the price of maize rose 20% last year and would increase by an additional 10% this year. She added that there had been a 30% increase in food prices, owing to the countrywide water shortages.

She also cited the 96c diesel hike in April, which cost the farming sector an additional R950-million.

“Farmers can either pass these costs on to the consumer or shut down their operations. According to the National Development Plan, the agriculture sector will be the largest job creator until 2030, [but] without affordable electricity and water, the country wont be able to manage [these expectations],” she said.

Gulati stated that large tracts of farmland were in danger from expanding coal mines in the traditionally fertile heartland of Mpumulanga, and that, further, out of 19 water management areas, five were experiencing problems. She added that, statistically, the water shortfall would be 1.7% by 2025.

She noted that demand for coal in South Africa was high, coal mines were expanding, and coal-fired power plants were highly water-intensive.

“Coal-fired power plants pollute water that is available to the population. In fact, coal-fired plants have polluted the Olifants river catchment to such an extent that these plants are no longer able to use that water in their own operations,” she said.

Gulati added that, running State-owned coal-fired power plants Medupi and Kusile would take water away from farmers and communities.

Former South African Deputy President Kgalema Motlanthe reiterated Gulati’s points on the importance of access to water, stating that South Africa sourced its water from the Lesotho Highlands, while citizens of Lesotho did not have access to potable water themselves.

He added that the scarcity of potable water in South Africa created health hazards and that, when considering the creation of a better quality of life for South African citizens, ensuring the requisite infrastructure was important.

“Those of us who have access to clean water don’t always understand that it is a rare resource,” he said.

Highlighting South Africa’s more than 3 000 km of coastline, Motlanthe urged black industrialists to explore the adoption of desalination technology, ensuring the critical problem of water shortage in the country was solved.

“[Desalination plants] will create many possibilities and solve so many problems that we are confronted by. Given the length of our coastline, we can end up with a fleet of desalination plants and have a way of pumping this water to the most remote corners of our country,” he said, adding that this, in turn, could create another industry.