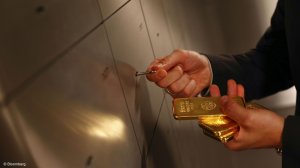 Russia spent more than $40-billion building a war chest of bullion over the past five years. Now, it’s calling it quits.

The central bank announced on Monday that it would stop buying gold starting April 1, but didn’t explain the move. Analysts say Russia already has a lot of gold stashed in reserves and likely doesn’t need more.

Plus, with gold prices near a seven-year high and international investors clamoring for a safe haven, Russian dealers are probably eager to sell. Bullion has become an extremely popular investment in recent weeks as the coronavirus sows fear through financial markets, but some dealers are having a hard time sourcing gold bars.

“The central bank is now signaling to gold sellers that they should redirect their supplies externally,” said Dmitry Dolgin, ING Bank’s chief economist in Russia. “Global demand seems to be high.”

Worldwide panic over the coronavirus outbreak and a flood of stimulus by central banks has ignited demand for the metal. But even though there’s literally thousands of tons of gold bars sitting in vaults around the world, it’s been hard to get metal when and where it’s needed. Gold is usually shipped on ordinary commercial flights, which are being canceled by the thousands.

More gold coming from Russia could ease tightness in the market. Suppliers may turn to chartered flights as a way to reach key buyers, said Eduard Rybkin, deputy head of the precious metals division at Lanta Bank in Moscow.

He said there’s demand from traditional buyers like London, but also places such as India, Turkey and Singapore.

Russia’s relentless gold buying in recent years has been a key pillar of support for the market, putting a floor under prices as investors ditched safe havens and bought riskier, higher-yielding assets. The bullion stockpile held by Russia’s central bank is valued at about $120-billion.

Gold accounts for about 20% of Russian international reserves, which is a high level historically and compared with other central banks.

“The central bank probably doesn’t want to increase gold’s share in reserves, while the size of reserves is falling,” said Tatiana Evdokimova, an analyst at Nordea Bank in Moscow.

The central bank said future decisions about its gold purchases will depend on the state of financial markets, according to a statement.