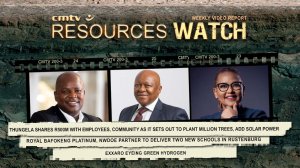 Coal mining and exporting company Thungela, which generated R8.9-billion free cash in the first six months to June 30, is sharing R500-million of it with employees and communities, setting out to plant a million trees to purify water and putting in solar power to reduce its carbon footprint.

Royal Bafokeng Platinum has provided a tangible example of its philosophy of “More than Mining”, by partnering with the North West Department of Education to officially open two newly built primary and secondary schools in Rustenburg, in the North West.