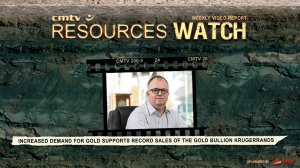 This week, an increased demand for gold supports record sales of the gold bullion Krugerrands.

Fifty years on from the minting of the first gold Kruggerand, demand for the iconic coin remains strong. Ilan Solomons has the story.

Ilan Solomons:
During a recent media visit to precious metal smelting and refining complex Rand Refinery, to mark the coin’s fiftieth anniversary, the company discussed the significance of this milestone and the importance of the Kruggerand to South Africa.

Increased demand for gold has supported sales of the gold bullion Krugerrands with 2017 predicted to yield the highest sales since the 1980s, with an expected 15% to 20% increase on the 1.1-million ounces of the coins sold in 2016.

Rand Refinery marketing executive head Richard Collocott elaborates on how the resurgence of the Krugerrands has made it into the world’s most traded gold bullion coin of all time, beating out its closest competitors, the Canadian Maple Leaf and the US Eagle.

Ilan Solomons:
Rand Refinery CEO Praveen Baijnath points out that the gold bullion Krugerrand represents one of the most remarkable stories from a beneficiation perspective with more than 60-million pieces sold over the past 50 years, equating to more than 1 660 t of local gold used in the process with currently about 25% of all South African gold sold in the form of Krugerrands.

Additionally, in commemoration of the fiftieth anniversary, a one-off limited edition of collectible Krugerrands is being offered in platinum and silver.

The golden legacy of the Krugerrand is also cultivated in the rest of the gold proof coin range with the 5 oz gold coin, as well as the much smaller one-twentieth of an ounce and one-fiftieth of an ounce coins.

However, while celebrating the coin’s half a decade of golden successes, the company and its industry partners have their eyes firmly set on ensuring the continued appeal and desirability of the Krugerrand brand in future, as Rand Refinery highlights.