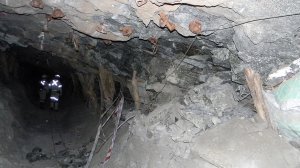 GREATER CONTROL While deep-level mines are still exposed to significant seismic risk levels, these are increasingly being controlled through research and its implementation

There have been major improvements in safety at South Africa’s deep-level mines over the past 19 years because of focused industry initiatives, as well as government- funded research and the implementation thereof, says SiM Mining Consultants director Friedemann Essrich.

“From 1990 to 1996, on average, around six multi-fatality rockburst incidents occurred every year, resulting in about 32 fatal injuries yearly. However, by 2005, multiple rock-related fatalities were almost eliminated and the rockfall- related fatality rate had dropped to close to 0.05 for every million hours worked, leaving other industrial sectors behind.”

Essrich says more recent statistics show that, although deep-level mines in South Africa are still exposed to significant seismic risk levels, these risks are increasingly being controlled through research and its implementation.

Contributing to this trend is the development of smarter rock mass monitoring networks and more meaningful seismic data analyses, he adds.

“It is now current practice on seismically active mines to determine not only the three- dimensional location but also the physical source dimensions and estimates of the stress drop and energy release within minutes of a large event occurring. This information is then distributed to stakeholders on the mine through either text message or email.”

Essrich adds that, where network configuration allows, the actual failure mechanism at the source can be determined from seismograms, leading to an understanding of the nature and the direction of rock mass deformation within the seismic source area.

“This is equivalent to determining how many cars were involved in a road accident, the directions in which they travelled and at what speeds, simply by analysing sound waves recorded at the impact.”

Essrich tells Mining Weekly that the improvements in seismic risk management at deep-level gold mines are as a result of changes in mining methods; introducing more suitable pillars; the abandoning of high-risk practices, such as remnant and pillar extraction; better support technology; and a willingness to adhere to safe practices, especially the strict adherence to recommended standards and designs.

He adds that historically, most of the research and development on rockburst-related incidents was done in deep-level gold mines.

The most concerning aspects for the public are also associated with gold mining districts, such as the seismicity induced by groundwater ingress into old mine workings from the Central and West Rand through to the Klerksdorp area; and “what was likely a sudden slippage” on a regional geological structure below gold miner AngloGold Ashanti’s Great Noligwa mine, near Orkney, in August 2014.

As a consequence, Essrich notes that, in recent years, the focus of rockburst-related research has shifted somewhat to old abandoned mines and the platinum sector, where orebodies similar to tabular gold mines are extracted at increasing depths.

He says the similarities range from hard and brittle rock-mass conditions to the dip and tabular shape of the orebody. However, stress conditions are generally not as severe in platinum mines as they are in gold mines.

Essrich further tells Mining Weekly that the Safety in Mines Research Advisory Committee prioritised the management of increasing seismic risk in the Bushveld platinum mines in 2010. The project, named SIM100301, was overseen by SiM Mining Consultants and it delivered guidelines for the management of rockburst risk in Bushveld mines. He says the outcomes of the project were considered relevant by the mining industry. In addition, the Chamber of Mines’ Rock Engineering Technical Committee motivated for a knowledge and technology transfer project to assist the mines in implementing the guidelines contained in the final report.

Further, SiM is becoming more involved in mine seismology training in the platinum sector, offering a range of courses, varying in duration from three days to several months. “The latter provides participants with an opportunity to complete practical assignments and a seismology project before being examined on their knowledge and skills levels.” Essrich tells Mining Weekly that the most fascinating aspect of the rockburst research in the Bushveld is the way in which in-stope pillars behave under the moderate, often horizontal stress conditions prevalent in the area.

“Whether a pillar, which was designed to yield in a controlled manner, can fulfil its role depends on . . . factors such as the in situ pillar size, its shape and position, the rock type and any disturbances in the pillar, as well as the dimensions of the gully and siding.” Essrich says these factors also determine whether it is the pillar that is more likely to fail or the rock above and below the pillar.

“There is still a lot of work to be done. What we know for certain is that literally all significant seismicity reported from the Bushveld mines is associated with pillars on the Merensky reef, and not the upper group two. The understanding of all relevant causes of pillar bursting is essential to eliminating this risk,” he concludes.