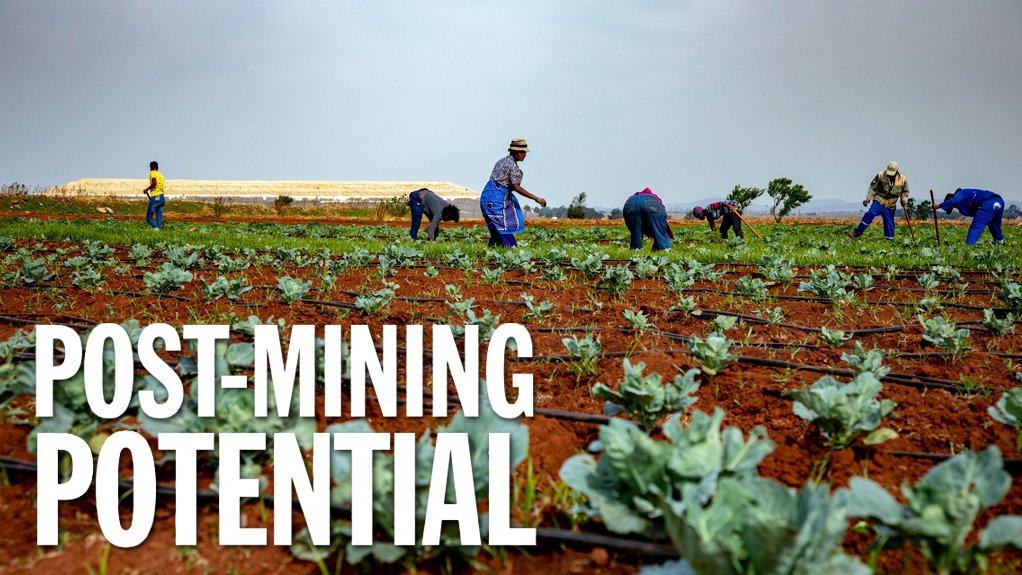 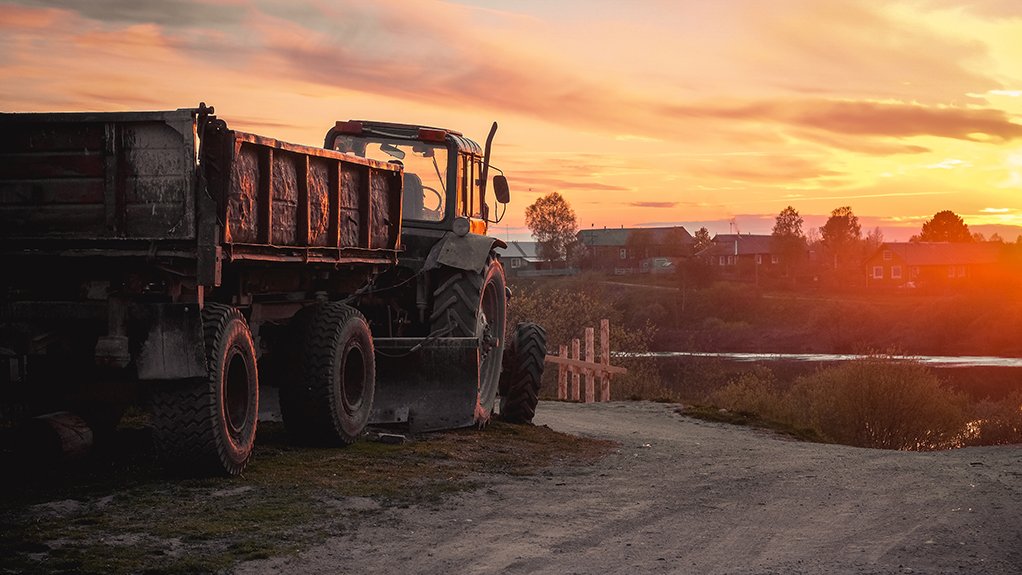 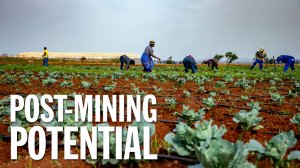 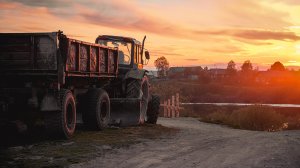 DRIVING POSSIBILITY The mining industry could well be a catalyst for increased agricultural development in South Africa through mobilising private sector resources, encouraging the growing of high value crops and driving responsible land use agendas

While the viability of rehabilitating mined land for agricultural purposes is still being debated and researched, there are success stories in the making, where mining companies are helping their host communities develop sustainable agricultural economies as mining activity winds down.

These agri-economies can help to sustain employment numbers in areas where mining was previously the major employer.

For example, JSE-listed coal miner Exxaro Resources says it is constantly looking at proactive solutions to challenges facing host communities around its mines.

The company embarked on a “minerals succession” programme that maps the potential agri-economy opportunities in communities.

Exxaro’s land management goals for 2026 include transferring 90% of post-mining land to emerging farmers in local communities, while creating strategic partnerships with farmers to advance these agri-economies.

The company hopes to increase agricultural production for food security and improved nutrition within communities, especially in rural areas where poverty is prevalent.

“To accomplish this goal, we first need to manage our lands sustainably, restore degrading areas, and improve irrigation and storage technologies,” the miner states.

Exxaro’s latest project is aimed at granting access to land for black empowerment farming businesses in the Strathrae nonmining area, in Mpumalanga. Exxaro’s Strathrae properties are part of the old Strathrae colliery, a wholly owned subsidiary of Exxaro.

Having obtained 2 282 ha through three separate lease agreements, the Exxaro- owned land will be used to provide and assist emerging farmers with access to farmable land in an economically viable and sustainable manner.

The benefits of this project are twofold. Firstly, it will assist many people with valuable farming resources such as grazing for animals and food security for the community.

Secondly, it will promote economic transformation by developing entrepreneurs and suppliers. This will, in turn, lead to competitive markets, as well as more job creation and sustainable communities.

Of the 15 emerging farmers captured in the Exxaro Sustainability Database, three were identified and allocated land accordingly. These entities include Z & F Group, a startup entity focused on feedlot and grazing for animals; LSTL Trading Enterprises, which specialises in the planting, harvesting and drying of soybeans and maize; and Jodonna Enterprises, whose main activities are crop and livestock farming.

After conducting interviews with these entities, their intentions to develop the local community became clear.

LSTL Trading Enterprises claims to have noticed the local youth’s hunger for skills development opportunities and has committed to employing people from the surrounding area only.

In addition to the promise of employing seasonal workers from the community during planting and harvesting seasons, Jodonna Enterprises will be a host employer to eight university graduates for their 24-month experiential learning period, which started on August 1. The graduates will be exposed to internship programmes of the Department of Agriculture, Land Reform and Rural Development.

The company will also assist two neighbouring farmers at the Leeuwpan coal mine, in Mpumalanga, in turning their cattle farming operations into a proper commercial business.

In a statement issued last month, Exxaro stakeholder affairs head Mzila Mthenjane described the project as a means of “re-imagining the potential of farmable land by introducing the power of affirmative action to help promote a more growth-driven future for the community”.

He added that Exxaro chooses to purposefully invest in meaningful investments that create a sustainable future for all South Africans, and, in doing so, empower black entrepreneurs with the tools, resources and support needed to succeed.

“We will continue to explore possible opportunities that support the socioeconomic development of people in and around our host communities, bettering the lives of these people and beyond,” Mthenjane said in the statement.

Ritchken highlights the need for agriculture to move from producing large amounts of low-value maize crops to high-value commodities and crops to improve employment and export numbers.

In 2019, agriculture contributed about 1.88% of South Africa’s gross domestic product (GDP). Agricultural organisation Grain SA says the sector continues to play an important role in the economy, regardless of its declining share of GDP.

“Contrary to popular belief, the country is not self-sufficient in its food supply, but it does not operate as a net importer of agricultural products, owing to the exports of high-value items such as fruit and wine.

“The sector also ranks high in terms of its ‘backward linkages’ with the manufacturing sector, and acts as a major labour-intensive employer in the economy,” Grain SA notes.

The organisation adds that continued investment in research, as well as infrastructure, particularly transport and irrigation, will have a significant impact on a large number of households and the greater economy, owing to its employment and food-security effects.

“This would also ensure that the sector maintains its international competitiveness and resulting positive trade balances,” Grain SA explains.

He attributes this slow rate of growth partially to producers’ having lost virtually all State support during a process of domestic market deregulation and unilateral trade liberalisation that lasted for most of the 1990s.

State support for farms in South Africa, as measured by the Producer Support Estimate database, was about 3% in 2010, compared with the average of 20% recorded in countries that are members of the Organisation for Economic Cooperation and Development.

This is testament to the need for private- sector capital to develop agricultural projects, states Sender.

JSE-listed gold miner Sibanye-Stillwater is developing an agri-industrial initiative, Bokamoso Ba Rona, which is a large-scale agriculture and bio-energy project in the West Rand district municipality, in Gauteng.

The initiative is a collaborative, multistakeholder approach to promoting sustainable economic activity focused on economic growth and transformation in the greater West Rand area.

The initiative is designed to facilitate the emergence of a sustainable economy after mining through the creation of employment and entrepreneurial opportunities, particularly in the agriculture and industrial sectors.

Sibanye, together with the Far West Rand Dolomitic Water Association, has put about 30 000 ha of land in a trust that will be used to develop a large-scale agricultural and bio-energy hub, with another donation of about 15 000 ha of land imminent.

Bokamoso Ba Rona is being developed by Talmar, an impact investment and development company, which was selected after a transparent procurement process.

Sibanye’s objective in appointing Talmar is to unlock private-sector skills, capabilities and capital in order to build a sustainable agriculture sector in the district characterised by high value crops, high labour intensity and an export orientation.

Ritchken notes that the Bokamoso Ba Rona initiative recognises the need for an alternative economy once the mine closes.

“Raising large quantities of capital from mainstream investors requires rigorous commercial propositions. Sibanye is a mining company with very limited agricultural expertise and is consequently enabling the unlocking of the private sector’s ability to build something sustainable and commercially viable through recruiting those companies who are qualified to develop a programme of this magnitude.”

Ritchken further explains that the initiative is in the land-preparation phase, with the land being put into a trust, while soil and water analysis is being conducted in preparation for agricultural activities.

The next step in the initiative will be to implement quick win projects of limited scale while recruiting some large, established framing companies who are capable of producing and processing high value export crops to act as anchors.

These companies will be contractually required to train management and local workers from surrounding communities, as well as provide comprehensive support to entrepreneurs who want to establish outgrower initiatives as a step to building their own independent farms.

Ritchken adds that, ideally, 30 000 ha of land, along with the subsequent value chain, can employ about two people per hectare. The initiative further aims to kick-start not only farming but also agri- processing and packaging activities.

The mining industry could well be a catalyst for increased agricultural development in South Africa through mobilising private-sector resources, encouraging the growing of high-value crops and driving responsible land use agendas.