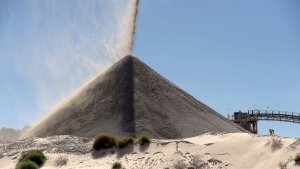 Red-hot lithium prices are getting a little less expensive, just as China’s electric-car giant BYD flags that the market could swing back into surplus next year.

The battery material in China has continued to retreat from the all-time high hit last month as signs of demand weakness weigh on the market. Lithium carbonate fell 0.2% to 571 500 yuan ($82 000) a ton on Wednesday, although prices are still around double where they were at the start of the year.

Lithium has enjoyed an extraordinary 1,200% gain over two years as supply has struggled to match rampant demand for electric vehicle batteries. That’s pinched manufacturers, which have been forced to raise prices. BloombergNEF’s annual lithium-ion battery survey showed a 7% jump in average pack prices in real terms this year — the first increase since the survey began.

Global passenger EV sales will grow less quickly in the fourth quarter than previously expected, especially as China faces a rising tide of Covid infections, according to BNEF. Meanwhile, Beijing’s subsidies for EVs that encouraged the rapid expansion of the past decade are due to be phased out at the end of the year.

The moderation in demand is overshadowing supply disruptions in China’s Jiangxi province, a key production hub.

Yongxing said it would carry out maintenance in the meantime to ensure full production once operations resume, according to a filing from its parent company. Lingneng estimated that its stoppage would reduce output by about 20 tons a day, according to its parent.

The production cuts from the two firms aren’t enough to offset slower demand, said Susan Zou, an analyst at Rystad Energy. She expects the downturn in prices to continue in 2023, although losses won’t be large, at least in the first quarter, because the supply of lithium compounds remains tight.