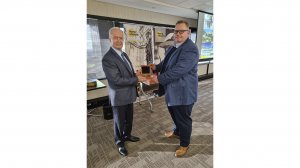 These acknowledgements are especially significant for a mining-related business, says Trevor Schultz, risk executive at Murray & Roberts Cementation. Schultz highlights that the Murray & Roberts mining group had reduced its lost time injury frequency rate (LTIFR) from 1.25 to 0.93 – taking it below the challenging score of 1.

Last month, the Association of Mine Managers of South Africa (AMMSA) recognised Murray & Roberts Cementation for reaching six million shifts without a fatality. The certificate was handed over to managing director Mike Wells and project executive Kethu Mokgatlha at an AMMSA meeting in Rustenburg.

At the Murray & Roberts in-house safety awards for the global group, Murray & Roberts Cementation was honoured with three prizes in the Zero Harm Projects category. The first was for outstanding safety performance at its Northam Grout Plant Project in North West province, after 18 injury-free years. The other two projects recognised were its Khutala Colliery Project in Mpumalanga, and the Murray & Roberts Training Academy in Gauteng.

In the same ceremony, the company also received a Special Recognition award for individuals, teams or companies with outstanding contributions to safety performance. Schultz says a key aspect of the company’s safety success has been its consistency and ongoing effort.

“It is important that we focus on applying and adapting our plans – and sticking with the agreed framework,” he says. “There are obviously realignments, when necessary, but we follow the plan and build momentum that way.”

He emphasises that Murray & Roberts Cementation accepts that mining is a hazardous environment, but that safety is a managed outcome and all injuries are preventable. In the company’s view, Zero Harm is not a slogan but a value.

“Safety management is about empowering people to manage risk,” he says. “Within the group’s safety framework, we have developed an integrated management system to drive safety.”

Among the ways the business continuously improves its safety impact is to record and classify incidents and ‘near misses’ in terms of their potential severity. These are presented at group level in a constructive engagement that highlights the lessons learnt. Such lessons are fed back into the group, to inform strategies where working conditions may be similar.

“The lessons we draw from incidents really take our safety awareness to the next level,” he says. “We also tap into the Minerals Council South Africa, to learn from incidents reported and analysed by our peers in the sector.”