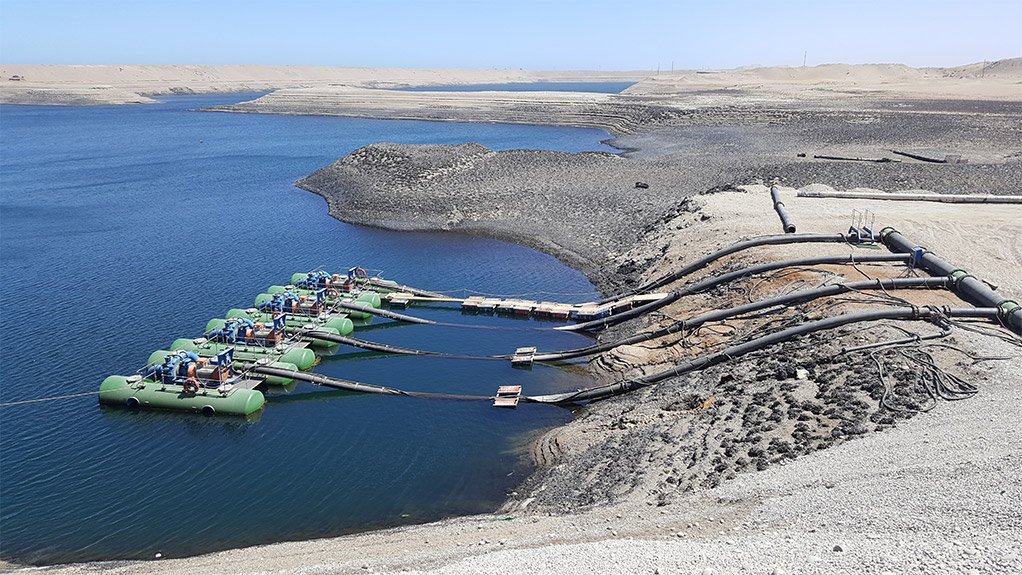 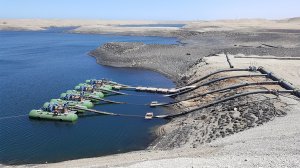 Germiston-based pumps supplier Centex Africa has supplied 13 dewatering pumpsets, with another eight pumpsets on order, to Namibian diamond mining company Namdeb to prolong the life of the mine by ensuring the safer mining of diamonds in the ocean water lakes in Oranjemund, on the southern coast of Namibia.

“Our project scope was to dewater 50-billion litres of water from the lakes as quickly as possible. Therefore, we supplied Namdeb with the 13 pumpsets, on 13 pontoons, which float out in the ‘lake’ and then repeatedly pump that water back into the ocean,” explains Centex MD Justin Lewis.

The pumps were delivered in December last year and, since then, the pumpsets have been working continuously. Namdeb ordered a further eight pumpsets and requested four lighter pontoons, which are in design stage. These pumpsets will be delivered to the mine this month.

The current pumps are being replaced with high efficiency, solids handling self-priming pumps to extend the life of the mine and provide further mining opportunities, says Lewis. He explains to Mining Weekly that the diamonds are at bedrock, some 35 m to 40 m below sea level and the deeper the mine excavated, the more water they encountered which creates the large lakes, also known as pits. Sand is used to create sea walls that have a width of about 200 m, which creates a barrier between the mining area and the ocean. The main pit is around 1 km long and 2 km wide. However, a large amount of seawater continually filters through the barriers.

The objective is to pump out the water from all the pits simultaneously. If the water is not pumped out simultaneously, the high walls between the pits may collapse, which has proven to be fatal. The pumps are used to dewater the lakes as quickly as possible so that the diamonds can be mined and removed safely.

The pumps supplied are Cornell’s 12NHTB-RP-F18-DB self-priming pumps, manufactured from ductile iron and internally coated. The pumps are “highly efficient and have tested efficiencies of 89% while passing a 120 mm solid”, explains Lewis, noting that this means that the pumps use less power to transfer liquids, resulting in lower operational costs.

The catalogue curve from Centex’s original research conducted during the tender process indicated a best efficiency point of 86%. “Generally, in the pumps industry, high efficiencies and large solids-handling are not commonly used in the same sentence,” Lewis claims.

“We have been able to do both while providing a self-priming pump.” He further states that the efficiencies reached with these pumps are generally found in clean water pumps that pass much smaller solids.

Further, the pumps that Namdeb previously used at the site pumped around 500 m3/h with a 160 kW electric motor and were mounted on floats.

The pumps supplied by Centex Africa were designed to pump 1 500 m3/h with a 250 kW electric motor and are mounted on engineered pontoons. “The project became affordable because of the low energy costs, owing to the high efficiency of pumps,” he points out.

Moreover, Namdeb reclaimed pipework from the older, redundant parts of the mine for the new pumps, further saving costs.

The Cornell 12NHTB-RP-F18-DB pumps have been internally coated with Scotch Kote, which helps to protect the pumps from the effects of the corrosive ocean water.

The pumps supplied are self-priming pumps and Centex opted to use Cornell dry prime pumps. A vacuum pump is used for the priming process in conjunction with a separator on the suction side, Lewis illustrates. The whole unit, including the pontoon and skid, weighs about 15 t. The pumps were imported from the US, but the designs on the skids and pontoons, as well as the hydraulics, where made by Centex Africa locally.

While Centex Africa may not have submitted the most capital cost-effective tender, the company was chosen for the project, owing to its high efficiencies and lower life-cycle costs, claims Lewis.

During the design stage, Centex Africa undertook detailed finite analysis of both the pontoon and the skids. The pontoon design was vetted by an independent marine architect who produced a marine prognosis report as part of the tender requirements.

Lewis explains that the Cornell pumps can move large amounts of water. If the original 13 pumps are each pumping 1 500 m3/h, that is 19 500 m3/h and 468 000 m3 a day. “It is a lot of water these pumps need to handle and, with the assistance of the mine and dedicated mining personnel, the project ran like clockwork,” Lewis concludes.

Germiston-based custom pumps supplier Centex Africa faced several challenges in meeting some of the requirements of the rapid dewatering project and in transporting the pontoons to Namibian diamond miner Namdeb’s operations in Oranjemund.

Namdeb required specific paint that involves a three-part process and takes ten days to apply. The weather and condensation issues in winter, when the pontoons where built, also had an impact on the time required to coat the pontoons, internally and externally in case the compartments are punctured.

In addition, transport of the pontoons from South Africa to Namibia was a key challenge. “The bridge over the Orange river is narrow, and the flatbeds we used with the pontoons, had a few millimetres clearance on either side,” illustrates Centex Africa MD Justin Lewis. This method of transport meant that Namdeb would have had to organise police escorts for the trucks on either side of the border and the costs would have increased drastically. “It was Namdeb’s idea to transport the pumps at an angle,” he points out.

Centex Africa designed a frame that allowed for the pontoons to be transported at an angle, which meant that the clearance on either side of the flatbeds was no longer as tight and the trucks no longer needed as many escorts. This greatly reduced transport costs.

“We delivered all the skids, all the pontoons and all the pumps on time,” concludes Lewis.