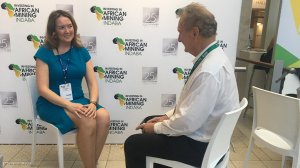 To do that in a credible way, LBMA has been actively engaging with mining companies and producer nations.

For refiners to be listed by the LBMA, they need to demonstrate that they have met the guidance under a third-party audit.

“The reality on the ground for a mining company is that if they are not doing the right thing by the environment and meeting the sustainability agenda, refiners can’t take that material,” LBMA CE Ruth Crowell told Mining Weekly Online on the sidelines of the Investing in African Mining Indaba. (Also watch attached Creamer Media video.)

“That’s an important lever. There are lots of standards out there, lots of requirements and I really think it’s only if we act collectively there’ll be a positive change, but using market forces to make sure that, unless you want to operate at a discount, you’ve got to be meeting these best practices,” Crowell explained.

When the guidance was launched in 2012, the main focus was ensuring that links with conflicts, money laundering and terrorist financing were broken.

While 85% to 90% of global production goes through the refiners on the LBMA list, an estimated 15% is outside of that.

While the LBMA has a good enforcement policy, it means that refiners as well as other participants have inhibited greater progress.

Transgressors are removed from the list as part of the LBMA’s zero-tolerance approach to precious metals being knowingly taken from conflict-affected areas.

The market in London holds more than $300-billion worth of gold in vaults. The average daily turnover is about $35-billion a day.

LBMA chief technical officer Neil Harby said in response to Mining Weekly Online's questioning of the predominance of 995 gold at South Africa’s Rand Refinery, that the traditional refining techniques that have been used for 100 years, take the gold quickly to 995, after which there is a law of diminishing returns in energy and efficiency terms.

“So, you start to lose gold after that, whereas the modern techniques making use of wet chemical refining can take that straight to 9999 gold. They don’t have to go through that traditional process, which was invented and used by South Africa because of the nature of the orebody and the material they were getting.