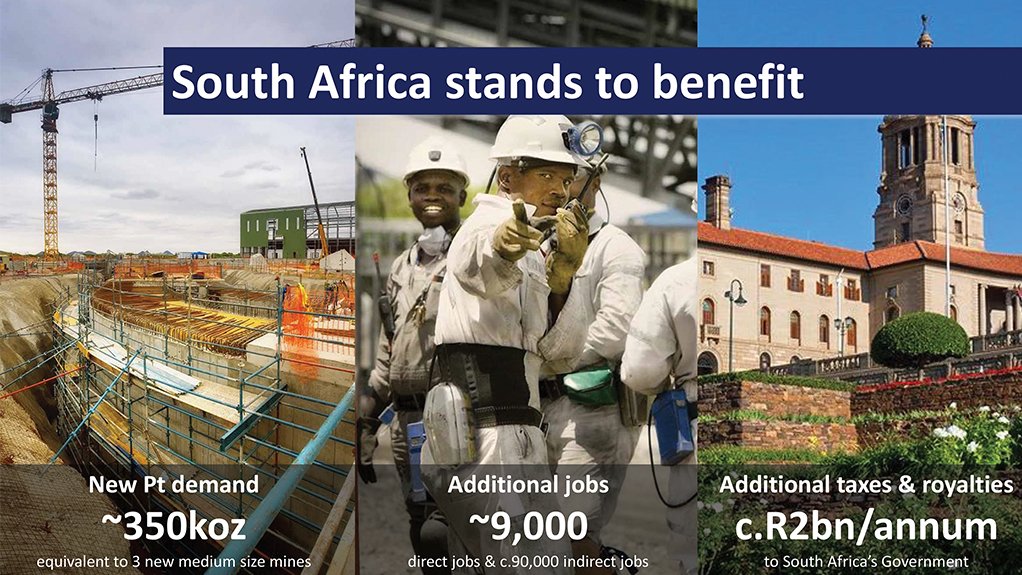 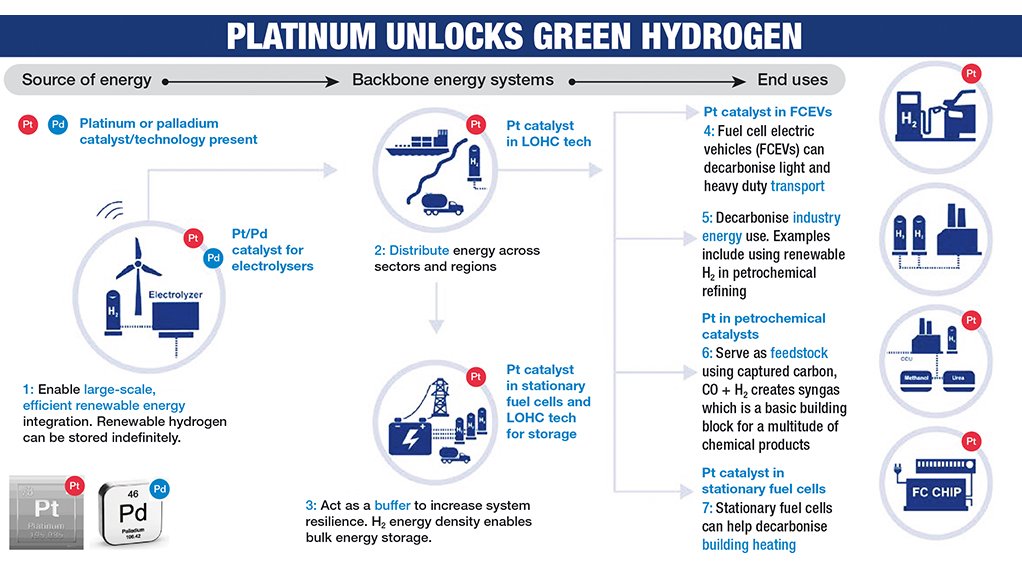 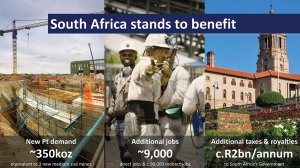 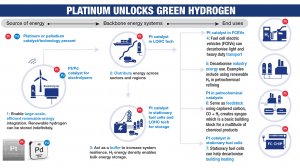 Anglo American Platinum CEO Chris Griffith, who presented a major address at last week’s Investing in African Mining Indaba in Cape Town, says PGMs are earmarked to unlock the versatility of green hydrogen in both stationary power generation and transport, where hydrogen can be used with PGMs in fuel cells.

Fuel cells are already finding applications across multiple transport modes, including trucks, buses, trains, forklifts and cars and the Hydrogen Council has seen its membership grow from the 13 founding members to 81 companies.

During that same period, stakeholders have proposed more than 30 major investments globally in related segments – and the momentum is growing.

Demand is expected to grow in time as new applications come on line, with a need to draw on an additional 350 000 oz of platinum by 2030.

This growth in new PGM demand will be good for South Africa, where 80% of the world’s PGMs are in the ground.

South Africa stands to benefit from at least 9 000 direct jobs and more than 50 000 to 100 000 indirect jobs, should the hydrogen economy and the demand for fuel cell electric vehicles grow globally as forecast.

Also, for 350 000 oz of platinum demand created, government will receive R2-billion a year in additional taxes and royalties at today’s prices.

To promote this transition, Anglo American is engaged in considerable market development.

“We continue to be able to shape policy and legislation in key global markets such as the EU, UK, USA and China,” says Griffith.

The global Hydrogen Council and the Chinese International Fuel Cell and Hydrogen Association are both good examples where Anglo American is a key founding member.

It spun off its venture capital fund into AP Ventures, which attracted top partners such as the Public Investment Corporation of South Africa, Mitsubishi, Toyota and Plastic Omnium, leveraging Anglo Platinum’s own commitment of $100-million over five years to more than $230-million in only 18 months.

AP Ventures, which has a strong focus on hydrogen, is invested in seven companies that span the value chain from hydrogen production and compression to storage and transport and solar use.

At Mogalakwena mine, Anglo Platinum will soon be piloting a hydrogen fuel cell haul truck and has also announced its intention to build a 100 MW solar electricity plant, from which it plans to generate green hydrogen for use in the haul trucks, that will have zero emissions.

A key driver of demand is the need to reduce our greenhouse gas emissions to reduce the catastrophic impact of climate change, which requires that global warming must be contained to prevent irreversible damage to the planet’s ecosystem.

PGMs being earmarked to unlock the versatility of green hydrogen in both stationary power generation and transport come against the background of PGMs in exhaust systems having reduced emissions to a point at which more than 100 cars today emit less than 100 cars did in 1960.