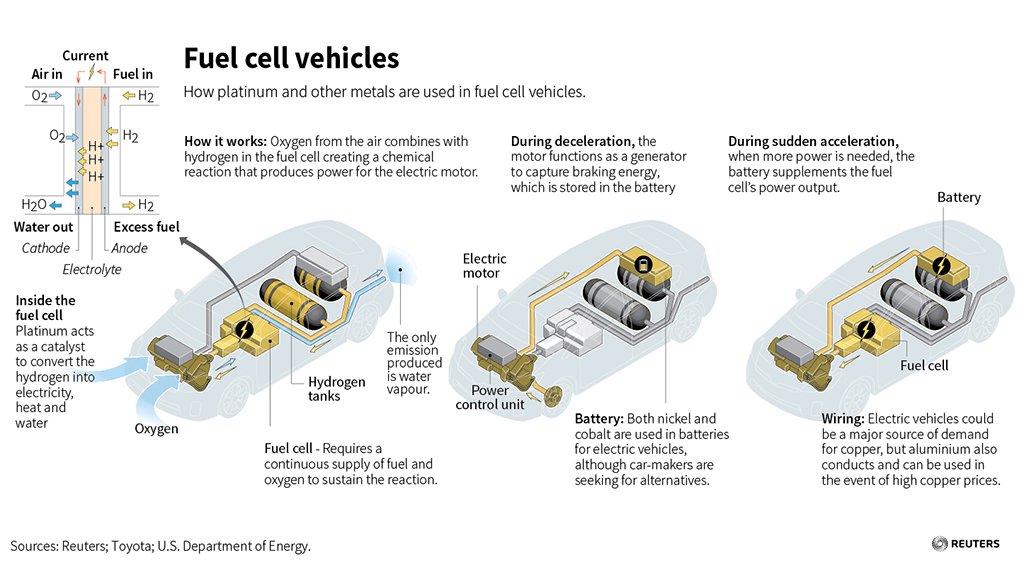 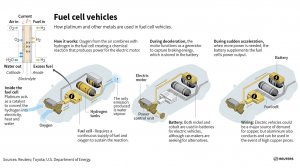 JOHANNESBURG (miningweekly.com) – Early research and development work has begun to pave the way for the introduction of hydrogen fuel cell electric trucking at a local platinum mine, Mining Weekly Online can today report.

A truck is currently being converted to run on hydrogen, which will initially be brought to the mine in tankers.

The electricity from the planned solar-power plant will be passed through water to produce hydrogen for fuel cell trucking. Platinum in the fuel cell will act as a catalyst to convert the hydrogen into electricity, which will power the truck as a heavy fuel cell electric vehicle (FCEV) that has zero emission and low noise.

“We have a test unit. We're busy converting a truck, as we speak, to be able to take hydrogen. Things are moving and our intention is to see if we could have hydrogen fuel trucks,” Mining Weekly Online was reliably informed.

Current moves of this nature by the South African mining industry dovetail perfectly with the new environmental, social and governance (ESG) demands being made on them by the investment community intent on curbing climate change.

Initiatives of this kind also set South Africa on an important new anti-pollution course that is being increasingly demanded by investors the world over.

According to law firm Latham & Watkins, recent studies show that the implementation of ESG in mainstream finance is presenting opportunities for sustainable, long-term returns, with asset managers, asset owners and pension funds recognising the importance of ESG factors to investors, stakeholders and shareholders.

One of the institutions doing the ESG measuring is Institutional Shareholder Services (ISS), a provider of governance and responsible investment criteria for asset owners, asset managers, hedge funds and asset service providers. Institutional investors look to ISS to identify ESG risk and to manage proxy voting on a global basis.

South African mining companies being forced to do more to bring ESG to the foreground should see it as an opportunity rather than a threat.

South Africa has one of the greatest “green” national patrimonies in the universe as the host of the world’s greatest platinum group metals (PGMs) endowment.

Some are now advocating that PGM-mine employees and South Africans in general be made more aware of the major part they can play in helping to bring climate-change solutions to the world.

South Africa’s private and public sectors would do well to work together to persuade the world that PGMs and clean hydrogen can twin to help the globe attain the goal of limiting global warming, as set out in the reduction targets agreed in Paris.

On the home front, there is potential to align South Africa’s evolving taxi-scrapping allowance with the shift from internal combustion engine (ICE) minibus taxis to FCEVs that make use of locally mined platinum.

This could be achieved, writes ENERTRAG South Africa CEO Dr Tobias Bischof-Niemz in the latest edition of Engineering News, by providing a conversion initiative in the form of an investment subsidy.

China is embracing hydrogen FCEVs the way it did electric vehicles (EVs), the publication TechCentral quotes Wan Gang as saying in an interview in Beijing.

As China’s science and technology minister, the former Audi executive convinced leaders two decades ago to bet on the then-untested EV technology of vehicle electrification, selling it not only as a way to boost economic growth but also to tackle China’s dependence on oil imports and its mounting levels of pollution.

His strategy — using government subsidies to bring car makers and drivers on board — made China home to one of every two EVs sold globally today.

“And now it’s hydrogen’s turn,” Wan was quoted as saying.

National Treasury should be persuaded that what it will lose on the fuel levy will be more than made up over time through a decline in the huge financial burden of having to import petrol and diesel.