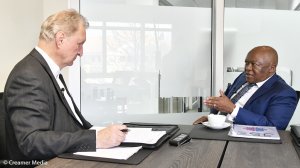 Hydrogen is increasingly seen as being central to climate change mitigation, with platinum, in turn, central to hydrogen. This is because hydrogen-converting fuel cell electric vehicles (FCEVs) are the 100% route to carbon-free driving in a world that is demanding decarbonisation. (Also watch attached Creamer Media video.)

Speaking to Mining Weekly Online, Phiri said that the use of hydrogen to decarbonise travel was being adopted in Japan, China, Europe and California.

“This is the right thing for us to copy. The technology is there. We just need to copy that technology. Do we have the capacity to do so? Yes, we do. We tend to wait too long,” said Phiri.

South Africa was in need of an alternative to coal-fired power generation “and that’s hydrogen”.

If South Africans make use of their superior sunlight and their prime wind, they can generate a lot of carbon-free electricity at a cost potentially cheaper than when Eskom burns coal and pollutes the air.

“We’ve got sunshine. We don’t have to buy it. It’s there. All that we need to do is to get that energy and use it,” said Phiri.

The generation of hydrogen by solar power and electrolysers is helped by platinum and iridium dug up by South Africa’s many platinum group metal (PGM) mining companies.

This hydrogen produced by electrolysers can, in turn, be sent to a fuel cell, where more locally mined platinum and sometimes ruthenium can be put to work, this time to coax the hydrogen into generating electricity.

Moreover, the PGM opportunity continues because hydrogen is an inherent electricity storage medium. Unlike batteries, which run down, hydrogen can store electricity for days, weeks, months or years, and remains at the ready to become electricity at any time. All this is done without a smidgen of carbon being emitted.

This major, far-reaching, compelling and nationally unique opportunity is there for the taking, experts reiterated at Nedbank CIB Market Research’s fuel cell conference in Cape Town last month, which was addressed by global academics and executives from the US, Europe and Japan.

"We’ve got excellent chemical engineers, metallurgical engineers and mechanical engineers in South Africa that can do what has to be done. The problem is we don’t have an OEM of our own in South Africa. All cars that we’re exporting from here are either from Europe or some other continent. We’re an assembly point rather than a construction point itself and all the specifications come from the company that we are assembling for. Technologically we can do it, but are we restricted? Possibly, yes,” Phiri said.

Toyota, which has a strong presence in South Africa, is a major developer of FCEVs as well as being a major supplier of minibuses to South Africa’s taxi industry. Because taxis follow regular routes, many postulate that hydrogen filling stations could be strategically placed to refill FCEV minibuses, which Toyota could develop.

The South African government could follow the California model of incentivising the building of hydrogen filling stations and the outcome would be far lower-cost fuel for the local taxi business.

In the mining sector, HySA could help to cut the cost of underground ventilation by replacing diesel machines with zero-emission fuel cell electrical equipment.

The World Health Organisation classifies diesel engine exhaust as carcinogenic based on evidence linked to an increased risk of lung cancer.

Accelerated acceptance of FCEVs would step up demand for platinum once more and fuel cell use in electricity microgrids in no-grid areas could add to that and provide the scale to help bring hydrogen power down the cost curve at the same time.

“All these vehicles are going to co-exist contemporaneously. There is no way in which one vehicle will dominate over the other. And what’s important for diesel cars and petroleum cars, I’m talking about internal combustion engine cars, is that they will have to fight for their space under the sun and improve their emissions. Oil companies need to improve the quality of the diesel itself and we see that improving all the time.

“In Germany, the talk is no longer about banning diesel cars, but banning cars that are not compliant from entering into the cities. So, every car will have an opportunity to compete equally with all other cars. There will be BEVs and there will be FCEVs.

"Fuel cell technology has developed. FCEVs are reliable vehicles but for the fact that we lack infrastructure at this stage, and therefore we’re seeing that in areas like California and China the hydrogen economy has become the talk of the town.

“It’s just a matter of time before you start seeing BEVs having a long range, FCEVs coming in because the hydrogen economy is being adopted and the infrastructure is being provided. At the same time, diesel cars will become increasingly compliant as well as petroleum cars.

“I would say every car under the sun will have an opportunity, but if I have to place my bet on it, I would say that with internal combustion cars you're going to find diesel or petroleum hybrids,” said Phiri.

Eskom is reportedly planning to spend up to R4.32-billion on diesel for gas turbines to keep the electricity supply on until December — and more after that in a worst-case scenario. HySA is well versed with turning sun power into hydrogen that could conceivably be used to power those turbines instead of diesel.

Some believe that a person to champion the overall South African energy equation and to take the lowest cost route that is environmentally protective and anti-carbon.

Phiri believes that the answer lies in the hydrogen economy and fuel cells. "The hydrogen economy is the answer because then we won't have power problems as compared to BEVs because if you have a million BEVs in South Africa, you can imagine the amount of power that those cars will consume. Does South Africa have an abundance of power? No," said the RBPlat CEO in giving a firm thumbs up to the hydrogen route being pursued vigorously in a growing number of global regions.

Mining Weekly will be publishing a major feature on Fuel Cells (deadline August 16) and companies wanting to advertise in the feature should contact Creamer Media COO Sales and Marketing Reinette Classen at +27 11 622 3744.