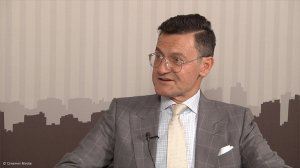 JOHANNESBURG (miningweekly.com) – Significant demand growth is under way in the platinum jewellery market, which remains the second biggest ounce contributor to platinum demand at 2.5-million ounces of yearly fabrication, some 35% of total demand.

“We’re seeing a lot of growth in the market. Obviously, the platinum price is really helping us in many of our markets where we’re competing against 18 ct gold,” Platinum Guild International (PGI) CEO Huw Daniel told Mining Weekly Online in an exclusive interview. (Also watch attached Creamer Media video).

“We’ve been very fortunate in the support that the platinum mining industry continues to give to PGI, bearing in mind the current context of the industry,” Daniel added.

Since jewellery development began with the opening of PGI in Japan in 1975, jewellery’s cumulative contribution has been around 80-million ounces, which is just nine-million ounces short of demand for platinum from the automotive industry over the same period.

As the only created source of demand responsive to marketing support, platinum jewellery can be activated at a relatively low average cost of $56/oz, with every dollar invested leveraged five to seven times by PGI’s network of trade partners, made up of 73 manufacturing companies and 13 000 retail outlets. In 2017, these partners themselves chipped in an incremental $20-million to give platinum jewellery promotion an additional boost.

The mature Japanese market is growing by 1% to 2% a year, the US market by 10% on average over the last year or two, and shoots of new growth are sprouting in China, as the country transitions into a more consumer-centric, commercial, margin-driven business model.

“Generally, we’re feeling very good about the position of platinum in jewellery and we look forward to a good year,” he said.

The expansion of the already highly successful bridal programmes into the tier-three and tier-four cities in China offers an exceptional opportunity to expand the market considerably.

“We’ve identified 350 000 oz there if we could expand our footprint out from the current 50 cities that we’re in to the 200 cities in those tiers,” Daniel told Mining Weekly Online.

Ensuring that every diamond in every diamond engagement ring in America is held by a platinum head would add another 150 000 oz of demand for platinum and also presenting opportunities is the Middle East, the world’s fourth-biggest jewellery market, as well as countries like Vietnam and Indonesia, where new consumers are coming on stream.

Being applied by PGI is a consumer-driven, market-driven model that responds to market stimulation, with the modelling showing “a kind of thermostat effect” of receiving return on investment within one to three years, with every dollar the mining industry invests leveraging much more out of the jewellery industry itself.

Pre-bridal and post-bridal opportunities in love-gifting are presenting themselves and beyond that are self-purchase marketing opportunities.

“One of the interesting opportunities we’re looking at is how to accelerate growth in men’s jewellery in India, which is a potential 150 000 oz market, just by producing more branded collections into a relatively informal jewellery sector,” he said.

In Japan, the legacy model being adopted taps into wealthy, slightly older consumers buying jewellery they can wear today and pass on tomorrow.

In the US, PGI sees many opportunities in self-purchasing, one involving bringing into the US market wonderful platinum jewellery chain necklaces from Japan.

“It’s our responsibility to bring to the industry the opportunities that are available and to make sure that we maximise those returns, which is why we’ve been working on the leveraged model. We have a pretty good complement of the platinum mining industry supporting us. Obviously, year by year, the absolute dollar amounts vary, but we now have six sponsors within the Platinum Jewellery Development Association and everyone is contributing to the best of their ability.

“The money that we have we can do a lot with and that’s what PGI is certainly focused on and finding work-arounds. One of the things that we’re doing is getting more into rapid prototyping that allows us to introduce new ideas quicker. That is something that helps with making the dollars go further,” Daniel outlined to Mining Weekly Online.

Among the biggest challenges are shifting consumer preferences, which are being driven by technologies that push greater control down the supply chain to the end consumer.

An encouraging sign for platinum jewellery is that Millennials are already the single biggest diamond buying cohort and the movement of the luxury brands and high street apparel brands into the jewellery space has been at the expense of the traditional fine jewellery market, where rising consolidation is providing the necessary counteracting scale.

At retail level, early e-commerce players are evolving into a blended model of clicks and bricks, and traditional bricks and mortar retailers are finding success in an omnichannel approach.

Local challenges persist, however, in what is a “glocal” business of Japan battling for share in a shrinking pool of younger consumers, the US having to meet the needs of fast-changing digitally connected consumers, China needing new skills to win the battle for share as it moves from developing to developed market, and India having to negotiate new trade compliance procedures.

Uncertainty over the future of diesel, and the longer-term promise of fuel cells leaves jewellery needing to take on a more important role in demand development as a proven successful business model that is delivering strong results globally, with more potential if more funding could be raised.