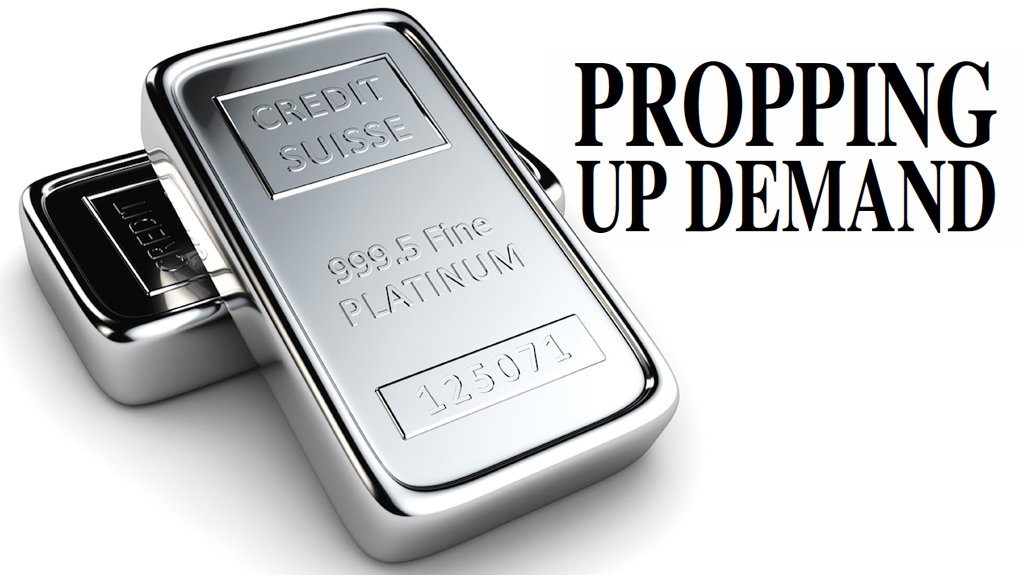 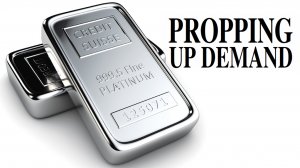 JOHANNESBURG (miningweekly.com) – Marketing is immensely important for the platinum sector, which is battling a pervasive weak price environment, with the metal trading at about $925/oz, compared with the all-time high of $2 270/oz in 2008, and an oversupplied market.

He notes that, through the 42-year-old guild’s marketing efforts, consumer demand for platinum jewellery is the second-largest demand source after autocatalysts, where platinum demand took a knock following vehicle manufacturer Volkwagen’s emissions scandal and extensive antidiesel sentiment, losing market share to palladium. But this has given rise to prospects involving other uses.

Platinum consumption in other industrial end-uses is forecast to rise slightly (1%) to 365 000 oz in 2017 from minor growth in fuel cell and turbine engine demand, although requirements for automotive sensors and plugs are set to remain flat year-on-year, says the World Platinum Investment Council (WPIC) in its Platinum Quarterly for the first quarter of 2017, published in May.

However, automotive platinum demand remains robust, particularly in Western Europe. “This will surprise some investors, given the continued media coverage related to the banning of diesel vehicles from city centres. However, we think there is a real opportunity for demand from this sector to grow,” says WPIC CEO Paul Wilson.

Daniel points out that there are two ways in which jewellery is unique among platinum applications. Firstly, it is the only truly created demand source, with marketing driving sales each year as new consumers come on stream.

“Jewellery demand responds to marketing immediately (within a season) and, in the long term, is amplified through the efforts of retail partners,” he tells Mining Weekly.

Secondly, jewellery marketing is highly efficient, creating demand at relatively low cost, says Daniel. A study that PGI recently commissioned to the Hong Kong University of Science and Technology found that, on average, it has cost between $12 and $100 to create 1 oz of demand over the past 15 years.

“This demand would not exist without marketing,” Daniel emphasises. He adds that, according to the Institute of Practitioners in Advertising, this marketing return on investment outperforms many leading marketing campaigns globally.

Marketing requires ownership and management on the supply and demand side, he comments. While PGI is responsible for marketing in the key regions, it does so on behalf of and in close cooperation with the mining companies funding the development of jewellery demand.

In addition, Daniel points out that the jewellery industry, specifically partners of PGI motivated by the guild’s leadership, makes a significant contribution to platinum jewellery marketing by investing in research and development, merchandising and marketing.

To-Partner Marketing entails marketing platinum-group metals (PGMs) to jewellery manufacturers and retailers to promote the business appeal of platinum.
Through-Partner Marketing is aimed at consumers in collaboration with strategic jewellery partners, such as jewellery companies Chow Sang Sang, in China, or Stuller, in the US. To-Consumer Marketing is marketing directly to consumers to create demand for distinctive jewellery categories like bridal products, such as gem sets, and occasions such as Valentine’s Day.

“All these marketing programmes deliver a substantial and measurable ounce-return to the industry that otherwise would not exist,” Schlick emphasises.

PGI was founded in 1975 to develop a demand for platinum in the jewellery industry, as an unmet need in consumer jewellery markets was identified that could be fulfilled through platinum’s unique qualities and image. PGI works with the jewellery industry, providing consumer insight, design and sales support, and runs direct-to-consumer marketing communications campaigns. In addition to its headquarters in Hong Kong, PGI has offices in each of the world’s major platinum jewellery markets, including China, India, Japan and the US.

PLATINUM INVESTMENT FOCUS
Wilson says in the council’s Platinum Quarterly that it “is pleasing to report that our market development programme continued to grow in the first quarter of 2017, with the launch of two significant new initiatives”.

In March, the WPIC, established by South African PGM producers to stimulate investor demand for physical platinum, announced the addition of platinum to the BullionVault online precious metals platform.

“The partnership means that 65 000 private investors who currently use this marketplace now have access to platinum. Just one month into the relationship, investor buying has been strong.”

“The launch of the Anantavarsham Platinum Series of deities is the first of a number of new initiatives we are planning in India, a market that has enjoyed significant growth over the last two years,” Wilson notes.

He points out that, since the WPIC was launched in 2014, its market development activities have yielded 13 separate initiatives that make investing in physical platinum easier. “Our efforts have directly resulted in more than 60 000 oz of metal being bought,” says Wilson.

The WPIC actively seeks to work with banks to make it easier to invest in platinum by, for example, making platinum exchange-traded funds facilities available in jurisdictions where they may not have existed. The WPIC also engages with central banks and institutional and private wealth investors to encourage them to hold platinum as part of their reserve assets.

PLATINUM COIN SETBACK
However, the WPIC has hit a brickwall in its efforts to produce a platinum coin to be marketed in a similar fashion to the successful Krugerrand gold coin. Mining Weekly reported in June that the South African Reserve Bank (SARB) had no intention of mandating the South African Mint to produce such a coin, as feasibility studies had shown the concept to be unviable.

SARB deputy governor Francois Groepe confirmed that the platinum industry had approached the bank on several occasions to assess the viability of a platinum coin, as well as to include the metal in the bank’s gold and foreign exchange reserves calculation.

There had even been efforts to promote a platinum coin that would bear the image of South Africa’s internationally renowned statesman, Nelson Mandela.

However, the concept fell short, primarily owing to the modest size of the global market for such coins, which the SARB estimates is only 50 000 oz/y.

By contrast, yearly sales of the Krugerrand equate to about 1.1-million ounces, or about 25%, of the global market for bullion coins. The Krugerrand remains popular in Europe, especially in Germany.

SARB deputy governor Daniel Mminele further told Mining Weekly in June that platinum could not be included in the bank’s reserves, as it did not qualify as a monetary asset under the definition provided by the International Monetary Fund.

“In fact, we have looked at this a number of times and, while platinum indeed would have some interesting characteristics as a diversifier in term of the reserves, it is an industrial metal and does not have the characteristics of a monetary asset like gold.”

Groepe added, however, that platinum and silver coins were being included in sets to commemorate the fiftieth anniversary of the Krugerrand.

The WPIC has been working with the SARB and the South African Mint since 2014 to encourage them to issue a platinum coin and says it will continue to do so despite the setback. The WPIC spoke with Mining Weekly about this issue, but, owing to the sensitivity surrounding the matter, was unable to comment further.

The WPIC has also, since 2014, been working with the Austrian Mint, which has subsequently launched its Vienna Philharmonic 1 oz platinum coin. The UK’s Royal Mint has also issued its own platinum coin and other countries, including the US and Canada, have their own platinum coins in circulation.

Sibiya notes that Implats is involved in promoting the use of PGMs in the auto industry, not only in catalysts but also in sensors and for other automotive uses. He adds that Implats is also playing a strategic role in driving PGM demand and local beneficiation through its fuel cell roadmap.

Sibiya says the phased implementation of the roadmap allows for development of local supply chains and South African intellectual property on fuel cells, as well as its subcomponents, which will allow for a sustainable local fuel cell industry.

Further, he informs Mining Weekly that Implats is planning to donate 16 ha of land adjacent to its refineries in Springs for promulgation as a special economic zone for PGM beneficiation and is in discussion with the Department of Trade and Industry, the Gauteng Growth and Development Agency and the Ekurhuleni metropolitan municipality in this regard.

“A feasibility report for the Springs PGM hub has been completed with positive outcomes,” Sibiya adds.

The programme assists in providing equipment for small, medium-sized and microenterprise (SMME) platinum jewellery manufac- turers. The incubator also offers access to facilities that assist in increasing the production capacity and quality of the SMME’s platinum products, while reducing their capital and set-up costs.

Over the past ten years, the incubator has assisted in developing 135 platinum jewellery-related small businesses. Lonmin is working with Seda to expand the scope of the project to include a focus on assisting in the development of industrial platinum-related businesses, thereby further encouraging entrepreneurship in the local PGMs sector.
Lonmin is also working on developing a platinum powder that is suitable for use in three-dimensional printing. This project is being undertaken in collaboration with Potchefstroom tertiary education institution North-West University, in the North West, and Bloemfontein’s Central University of Technology, in the Free State. A future goal is to eventually establish an innovation hub, says Swarts.

“The hub would serve to encourage companies to use the facility to develop prototype products from the powder, which perhaps could not be produced previously using ordinary platinum material, thereby adding to the list of applicational uses of platinum,” she concludes.